TLDR: Be very careful with T-Mobile and their promotions. Check your bills carefully, especially if you have Autopay on.

Lets get this straight: I used to be a huge fan of T-Mobile because they were different than the other big carriers. They carried out their Uncarrier initiatives and changed the way things were done in the mobile industry – no overages, free international usage, bills that weren’t padded by device subsidies and Tuesday thank you rewards. After what happened these last few weeks, I have lost faith and trust in T-Mobile.

This is the promotion that I wanted to switch to when I saw it announced. The plan is not bad compared to my old plan and offered more data for all lines. What is important to know is that the pricing on the promotion page does not reflect what really shows up on the bill. Instead, it works like this:

It is a seriously sneaky way of making the fourth line “free”. And, to get to the $140/mo promotional price, it all hinges on Autopay being turned on. The formula for how the promotion actually works is far from what is shown on the promotions page. When I saw that my plan change was going to be $160/mo, I contacted both T-Mobile support via their site and the T-Force via Twitter to confirm the pricing of my plan.

What I was told was that on my next bill, I would see the new price and that it would be based on the formula outlined above. I waited until my next billing cycle to start to see things change. To my surprise, I logged in today and saw that I was billed for $160/mo! 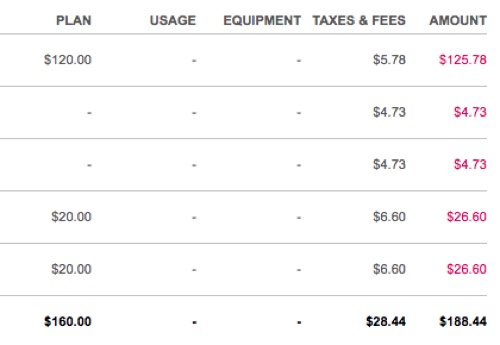 I spent two hours Direct Messenging with T-Mobile Support and also publicly posting about my experience (directed at John Legere). Finally, support tells me that it could take up to two months for promotional credits to start showing up on my bills. My reaction: Hell no. If you start a promotion and I sign up for said promotion, the promotion starts when I sign up. 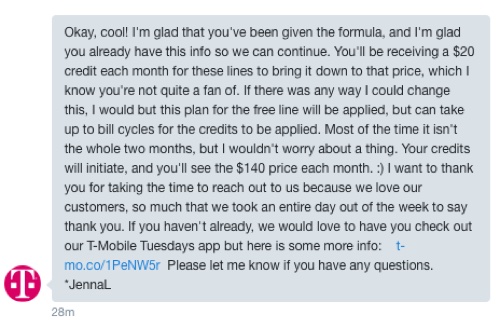 Notice how they cheerfully tell me that it could take two months, but do not offer to credit me to make things right? After spending even more time with support, they finally gave me the $20 credit for this month – something that they should have done from the start.

I cannot express how disappointed I am at T-Mobile because of this. Switching plans to get promotional pricing should not take multiple converstations with support. Nor should it take complaining publicly to the CEO to make things actually happen. T-Mobile should take better care of their customers.

T-Mobile’s pricing is now getting pretty close to the pricing of the other carriers. This puts T-Mobile in a precarious position since other carriers are no longer doing contracts (ironically, they were forced to drop contracts because of T-Mobile’s push via Uncarrier). T-Mobile needs to step up its customer service game if they want to stay competitive, because at this point leaving T-Mobile is as simple as porting my phone number over to Verizon or AT&T or Sprint.

Bottom line is: If you’re going to change over to a promotional plan from T-Mobile, you’d better watch your bill carefully. Especially since T-Mobile is now starting to base pricing and promotions on having Autopay turned on. My guess is that they are banking on people not looking at their bills because the bills are automatically being paid.