I was thinking the other day that maybe the original Philips BDP7501 that I had was defective. So, yesterday I picked up a new unit from Target to try out. The first one had problems dealing with slightly scratched discs and also did not want to play Captain America: Civil War correctly. I eventually returned that original unit because of these issues. 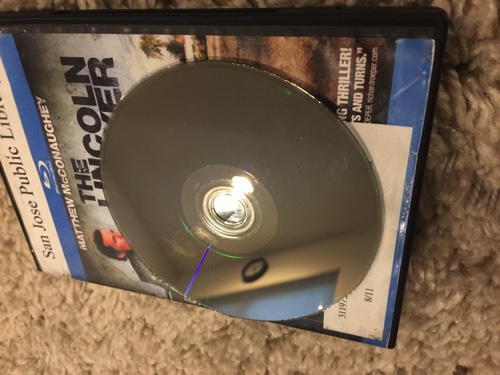 This is a picture of the underside of the Lincoln Lawyer Blu-ray disc that I borrowed from the library. Click it to see the full-sized image. The disc is not scratched bad, but someone did leave a few fingerprints on it. Yes, I could have wiped it clean and it probably would have played fine. But, previously, I had discs that I cleaned but were scratched that exhibited the same behavior.

This is what happens when the BDP7501 hits a particular spot on the disc:

This is what happens when the same disc, untouched, is played in the Samsung UBD-K8500 and hits the same spot in the movie:

I am convinced now that the Philips player is not robust enough when it comes to dealing with anything but a pristine disc. This is unfortunate because as I wrote in my original review, this player is really nice otherwise. Since the Samsung UBD-K8500 is the same price as the Philips BDP7501 (at least for the moment because Fry’s has an in-store price for the UBD-K8500 that matches the retail price of the BDP7501), I will keep the Samsung and return the Philips BDP7501.

The Samsung has been performing flawlessly for the last week since I got it. I will write more about it after I get some more time with the machine. I really miss the playback information that the Philips provides. I also like the conventional look of the Philips (in other words, no silly curve on the front). But, I want a machine to play movies. Since I do borrow a lot of movies from the local library and the discs are not always in pristine condition, I need a player that is robust when it comes to playing back imperfect media. So far, the Samsung has done just that.