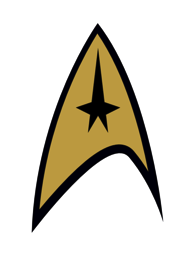 I have always been a fan of Star Trek, but only through the films, not much through the TV shows. I had watched random episodes of the different series, but I never watched a series from start to finish. And, until last year, I had never seen a single episode of Enterprise.

Late last year, after setting up my DVR, I was looking for something to watch and discovered that the channel Heroes & Icons was running one episode of each of the five live-action Star Trek series per day. They were showing each series from start to finish and then starting over. On weekends, Heroes & Icons even ran two episodes of The Animated series. This was fantastic! The series that was starting over at the time was Enterprise, so I tried a few of those episodes to get going. I figured that I would start my Star Trek Journey in chronological order based (loosely) on Stardate and not when the series ran on TV. So, the order of viewing would be:

This journey will be across 725 episodes spanning 30 seasons; and eventually 13 films. For the upcoming series Discovery, I will probably wait until it is finished before I start down that road. I have watched a season and a half of Enterprise, but I am going to restart from the beginning – even through some of the painful parts of the first season. I plan on not binge-watching any of the shows, even if I want to progress. I will do, at most one or two episodes per day. At that rate, I am in for a long two year journey, it should be fun.

I have the Star Trek 50th Anniversary TV and Movie Collecton on Blu-ray (all of TOS and TAS); the Star Trek: The Next Generation TV and Movies on Blu-ray; and the Enterprise collection on Blu-ray. I plan on picking up the Star Trek: Deep Space Nine and Star Trek: Voyager collections when they release on DVD in February and March 2017 – there are no HD remasters for DS9 and Voyager. I could continue to watch the shows on Heroes & Icons, but I don’t want to skip through commercials – and I want to enjoy Enterprise, The Original Series and The Next Generation in 1080p with DTS-HD Master Audio.

Instead of watching only, I will write something about each episode after I watch it. It might not be much, but it will be something. You can find my thoughts on each episode here.