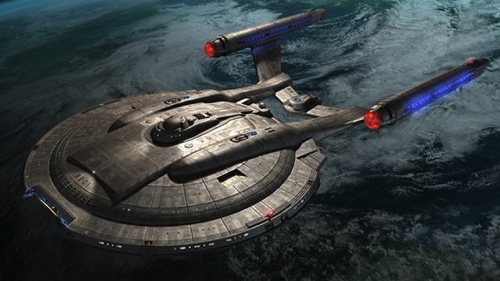 It took me a bit longer to finish Star Trek: Enterprise than I thought it would. When I started this Star Trek Journey, I was optimistic and figured that I would finish the journey in two years watching an episode or two per day. At that rate, I should have been done with Enterprise three months ago. It took me a while to finish Enterprise because of a few reasons, the largest being Captain Archer (more on that later).

I am sure that Enterprise will not be my favorite Star Trek series. Is Enterprise the worst Star Trek series? I don’t know yet since I have not watched the others. The show did have more rough patches than good ones, but for the most part it remained entertaining. I struggled through large portions of the series because of bad writing, but there were times that I found myself caught up in an excellent episode (more on this later too).

The first and second season ran in a fashion where things were reset each week. The third season attempted and almost achieved an interesting season-long story arc. The fourth and final season attempted to focus on mini-story arcs which was hit-or-miss – and then the show sputtered to an end with a rather unsatisfying finale.

Would I watch Enterprise from start to finish again? Maybe after a few years. I may revisit some of the great episodes in the series again from time to time, but struggling through all four seasons again would be a chore.

Anything after this paragraph will have spoilers. What follows are my observations of the Good, Mediocre and Bad things about the show.

Let me start out with the good stuff first. 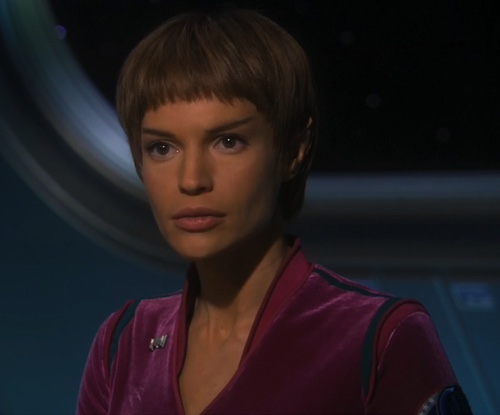 The biggest thing that I liked about Enterprise, and this will probably be controversial, is the character T’Pol. Her character was complex and experienced the biggest character arc of all the crew on Enterprise. While some may not have liked Jolene Blalock’s portrayal of T’Pol, I loved it. She was a mixture of aloofness, seriousness and pure logic – she changed along with the character as the character progressed. She went from a logical emotionally-suppressed Vulcan to a scarred emotional Vulcan without missing a beat.

T’Pol was the character that grounded the show and was the one that always had the right course in mind, even if the Captain did not heed her advice much. The different T’Pol storylines changed the T’Pol in ways that by the end of the show, the T’Pol we see had not only grown, but was completely different than the T’Pol we met at the start of the show.

Some T’Pol episodes that I enjoyed were Carbon Creek, Fallen Hero, Demons and Terra Prime. By the time we get to These Are The Voyages, T’Pol has not dealt with many of her own problems and has come out better and stronger.

I have to hand it to the designers, the NX-01 (and later her sister ship the NX-02) are beautiful ships inside and out. I really loved how the designers made the inside of the ship less like a luxury-liner like the NCC-1701-D and more like a military submarine – the best example of this is the Captain’s quarters where Archer is constantly having to duck as he walks around. The engine room was also quite beautiful with the warp reactor front and center.

There were other little things about the ship that made it feel like an experimental ship. Things like the ship not having a tractor beam and having to deal with a sometimes unreliable grappler. The transporter that for the first few years was untrusted. The constant use of the two shuttlepods because of the transporter.

The one niggle I have about the ship is with the bridge, which for the first three seasons was fantastic. There was some change after the retrofit in the fourth season where there was the addition of 1000s of randomly flashing LED lights. Which seemed to be a change for nothing other than to try to make the bridge look more futuristic, but only ended up cheapening the set and making it look like it came out of a B-film. 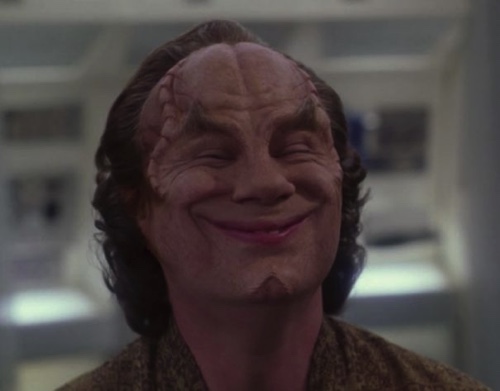 Phlox was never given enough screen time, but when he was, the character was fantastic. John Billingsley brought weight and presence to the character and made the character relatable and lovable. The Phlox-focused episodes were some of the most enjoyable and memorable of the series: Dear Doctor and Doctor’s Orders. Phlox’s reaction to the passing of Elizabeth (T’Pol and Trip’s baby) in Terra Prime was genuinely touching and brought some real emotion to the scene.

And who can forget Phlox’s big smile? 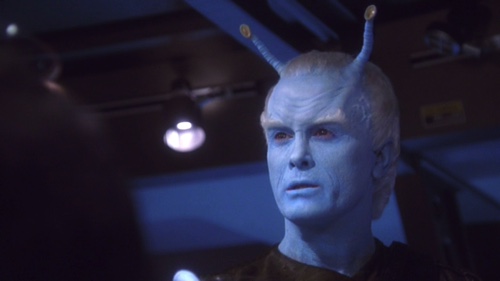 Of all the alien races that the crew of the Enterprise meet, it is the Andorians that I like the most. They are both trustworthy and untrustworthy at the same time. They are crazy paranoid and seemingly stuck in the emotional state of being annoyed/enraged. Their constant use of the term “pink skin” in reference to humans always made me smile.

Shran was one of the recurring characters that always made the show extra entertaining and I loved each episode he was in no matter how bad the actual episode was. 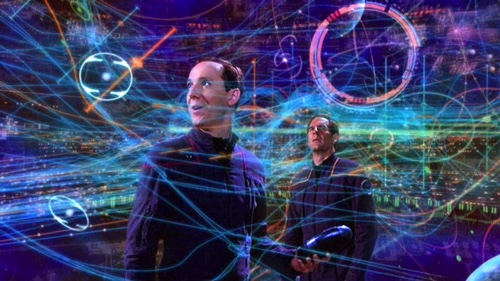 Daniels didn’t show up much, but when he does the episodes always turn out to be interesting. It is too bad that the writers never knew where exactly to take the Temporal Cold War and that the war was eventually erased in Storm Front. But, it was fun to have had Daniels in the series. 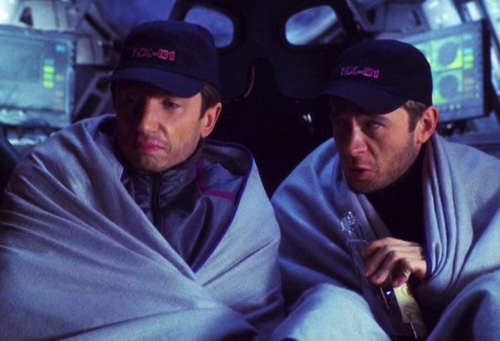 There were a few memorable episodes, here are a few that I want to mention.

The Xindi (aka Season Three) 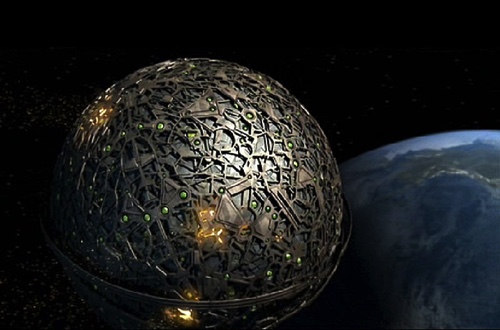 That’s not to say that the third season’s filler episodes were all bad. They did turn out a memorable one, Similitude, and one fun diversion North Star. 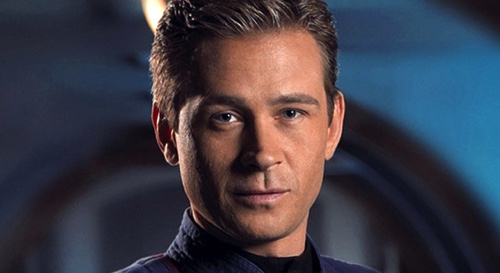 I like Trip, kind of. The character eventually becomes more laid back, but for most of the series Trip seems to be a mix of two characters in one: a hot head and a genuinely nice guy. But, even so, in the end Trip was a good character and having him killed off in the last episode for no real good reason was unnecessary and felt like a cheap way for the writers to get an emotional beat.

As mentioned above in the Daniels section. The Temporal Cold War could have something cool, but the writers could never get anywhere with it. Worse yet, they leave many things open and then go and erase the whole Temporal Cold War all together.

I still want to know who the shadowy man in the time communications device was.

The Theme Song (Seasons One and Two)

When I started watching the pilot for Enterprise, I was a bit thrown off by the theme song that played over what is an excellent title sequence. I was confused to if I was watching a Star Trek show or if I were watching a family drama of some sort. My wife who heard the song playing while walking by the TV asked what I was watching because it did not sound anything like Star Trek.

I did not hate the theme song, nor did I dislike it. Eventually, the song grew on me and I came to like it. The lyrics of the song fit perfectly with the images onscreen and together they did represent all that Star Trek, especially in the context of the nascent exploration the Enterprise was going to embark on.

Everything with the opening credits and the theme song were great until Season Three rolled along.

Would the opening titles been better if they were backed by an orchestral score like the rest of Star Trek? Yes, it would have been epic. Here is an example of what it could have been. 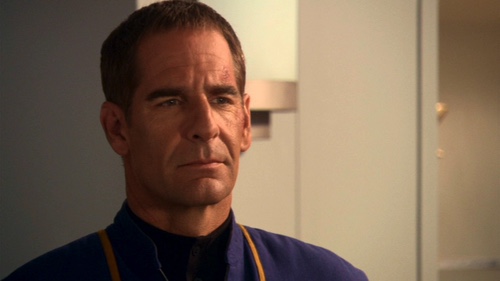 Jonathan Archer was not a great captain, he wasn’t even close. He really wasn’t even a good captain. I never did like him from the get-go. I understand the need to strap some baggage onto the character, like his distain for Vulcans at the beginning of the series. I also understand that characters are more interesting with flaws, but this character was more flawed than good. He was emotionally driven and not very logical. And throughout the series, he had incidents where he became suicidal in attempts to save the crew/world/universe when a more logical solution was at hand. He was a particularly hard-headed captain also, not taking advice when he should have – especially the advice from T’Pol who usually had a more level-headed and logical solution.

And while Scott Bakula is a good actor, I did not enjoy his performance/interpretation of Archer. It never felt right to me and this always rubbed me the wrong way when I was watching the show.

Archer is the biggest reason why Enterprise did not work for me.

The Rest of the Crew

Malcolm Reed, Hoshi Sato and Travis Mayweather were not at all great.

Malcolm was an annoying character that did not get any better over the show’s run. He had this locked arm way of holding his phase pistol that was both hilarious and silly. When the writers gave Malcolm a backstory of being an intelligence spy, it came off as unintentionally silly and unbelievable. When Malcolm was sneaking around to meet with his contact trying not to look suspicious in a dark alley… well, that’s what he came off as looking.

Oh Travis, the nice guy who has to keep reminding everyone that he’s a space boomer. It didn’t help that Anthony Montgomery’s acting was wooden and stilted. When he did get memorable moments, they were not that great. For instance, when he got hooked into a repair station computer and when he almost died while rock climbing.

I don’t know which studio executive thought it would be beneficial to speed up the theme song and remix it to sound more upbeat, but they did it. The new theme song was in stark contrast to the darker tone of the Xindi storyline that was the majority of the third season. It was a a bone-headed move by the studio. 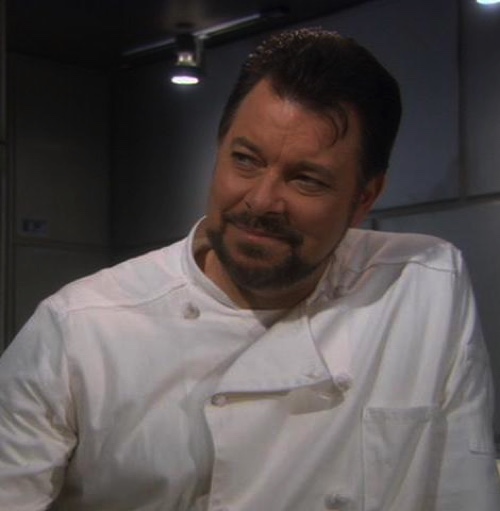 The finale for the show was the absolute pits. The show got upstaged when it got sent off as a holodeck re-enactment that was used by Riker to figure out his own situation. Sure, there were some memorable moments, but those were far and in-between.

What was the reasoning for killing Trip? It was completely unnecessary and felt like a hollow stab at achieving some emotional impact to a lackluster finale for a lackluster show.

The finale of the show had a severe lack of vision. The holodeck historic re-enactment shows the crew of the Enterprise ten years after they launched in the first season, four years since we saw them in the episode before. And what has happened with the crew in this time? Apparently, nothing. Travis and Hoshi are still ensigns. Ten years and they have not advanced in rank? Trip is still the Chief Engineer on Enterprise? Archer still the Captain? T’Pol still the First Officer? I mean, ten years is a long time, it almost could have been two weeks after the last episode.

The finale for the show was ultimately unsatisfying.