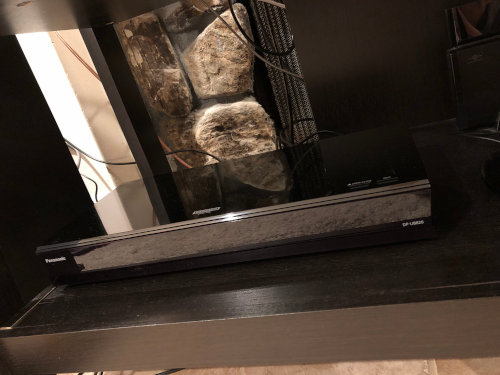 I picked up the Panasonic DP-UB820 three days ago in hopes that Panasonic had fixed the issues that I experienced with their DMP-UB900 two years ago. Sadly, they haven’t and there were other issues which resulted in me returning the player.

The player is gorgeous with its fold down front face and mix of metal and plastic build. It continues the tradition of having a very detailed playback information display which shows input and output information. This thing has so many knobs and buttons to flip and change for settings that it makes a nerd like me giggle in glee.

This player, unlike the LG UBK90, has a fan. The fan is quiet, but it is yet another moving part. While the fan is quiet, the drive is loud. I sit six feet away from the player when watching movies, when I was watching The Martian with my son, during the quiet scenes, the whirling sound of the drive can be heard and was very distracting. When seeking, the sound of the drive moving is also quite loud. I am surprised that Panasonic did not sound proof this machine better – the LG UBK90 and the Sony UBP-X800 are both whisper quiet during playback and seeking.

All the playback issues that I had with the Panasonic DMP-UB900 were still here with the DP-UB820. The UB900 had issues playing Captain America: Civil War near the middle of the film – I am guessing where the disc switches layers at the chapter “We Fight” around the 1h34m. On the UB900, the player would freeze up and then skip to the next chapter. On the UB820, the player stuttered and had macro-blocking, skipped a few seconds and then continued on – better than the UB900, but not by much.

While watching the Twister Blu-ray that I borrowed from the library, there was macro-blocking, stuttering and skipping at the 1h 8m mark. I checked the disc and there were no noticeable scratches. I cleaned the disc to remove any smudges and fingerprints (this is a public library disc that isn’t much cared for). After all this, the UB820 still would not play that section of the disc properly.

Both sections of these movies played back just fine on the UBK90, X800 and a Xbox One X.

At the premium price that Panasonic is asking for the UB820, I expected way more. While the LG UBK90 is a barebones machine that has minor quirks (it doesn’t automatically switch between 24p and 60hz), it performs better than the UB820 is what matters most: Playback of movies.