Recently, I have been working on getting Ring cameras setup at home. We already have a Ring Doorbell 2, so adding cameras was easy since it would all be done in the Ring app and covered under one subscription. Another benefit is the integration with Alexa allows me to use the cameras as sensors for automation which is very cool.

Ring has some problems with the naming scheme of their cameras and the UI in their app that I discovered while working with their cameras. Both of these issues cause problems for people looking for information and support. They also cause confusion when asking questions in the Ring Forums and on the Ring Subreddit.

When I installed the Stick Up Camera (3rd generation) and the solar panel, I found that even with little to no events in a day, the camera was draining at a steady 1% per day. The solar panel was not charging of the camera.

I looked in the forums and found that there were people who were seeing the battery drain overnight, this was because in earlier versions of the Ring app, it had bad logic which showed the camera as AC powered when the solar panel was plugged in. This prompted the app to ask the user if they would like to switch to the AC powered version of motion detection – this would drain the battery overnight.

My camera was setup as a battery camera, though I was initially offered setting it up as a wired one. A subsequent update to the app removed any normal indication of a solar panel being connected – though, it was somewhat hinted at.

This is what it looks like when a solar panel is connected to the Stick Up Cam 3rd Generation.

At 7:57AM before the sunlight hits the panel to generate electricity (shadow from a tree blocking the light), the battery level reads 89%. 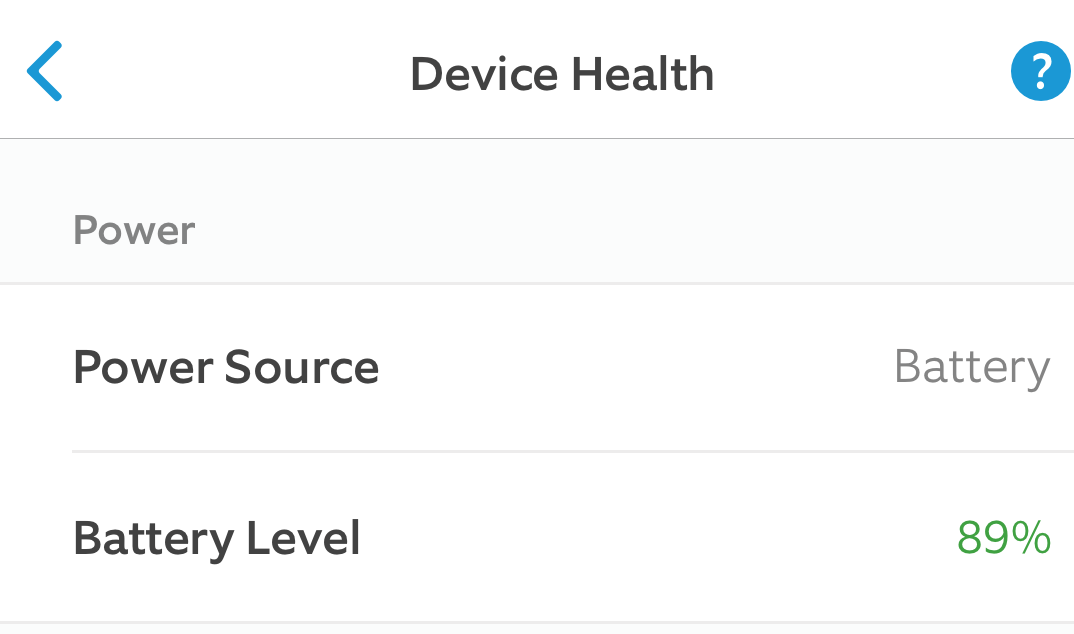 Three minutes later at 8:00AM after the sunlight hits the panel and starts to generate electricity, the battery level magically jumps to 100%. 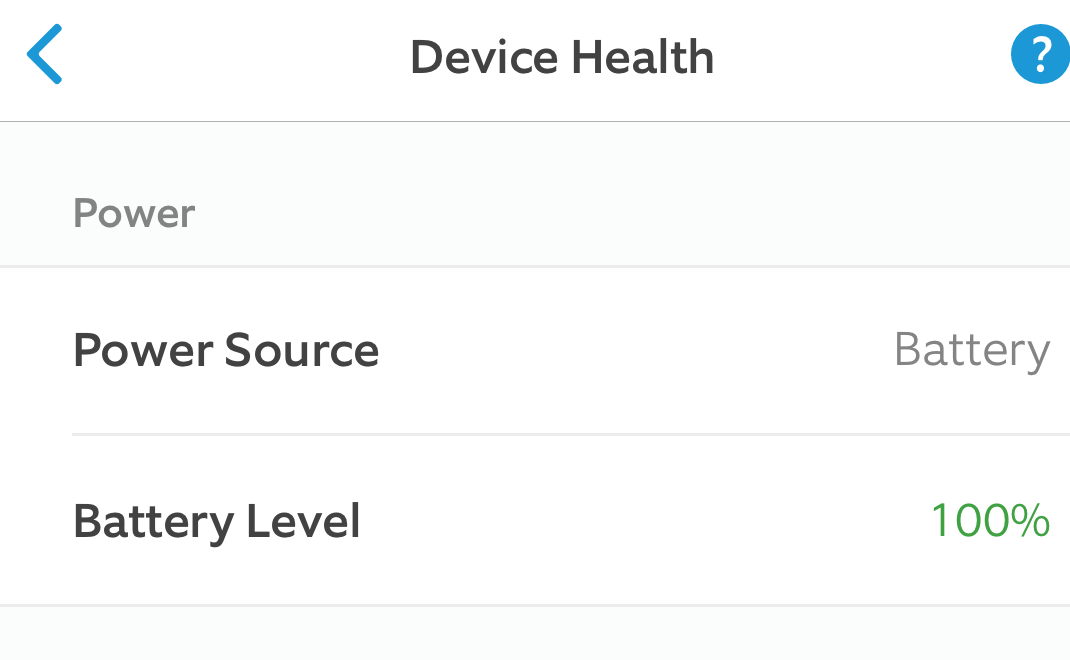 Solar panels are not that efficient, especially the one that I have installed – Ring Solar Panel that generates 2.2W, 5.2VDC.

The Spotlight Camera that I installed with a solar panel showed a different UI that clearly states if a solar panel is connected (and if it is generating enough power to charge the batteries). 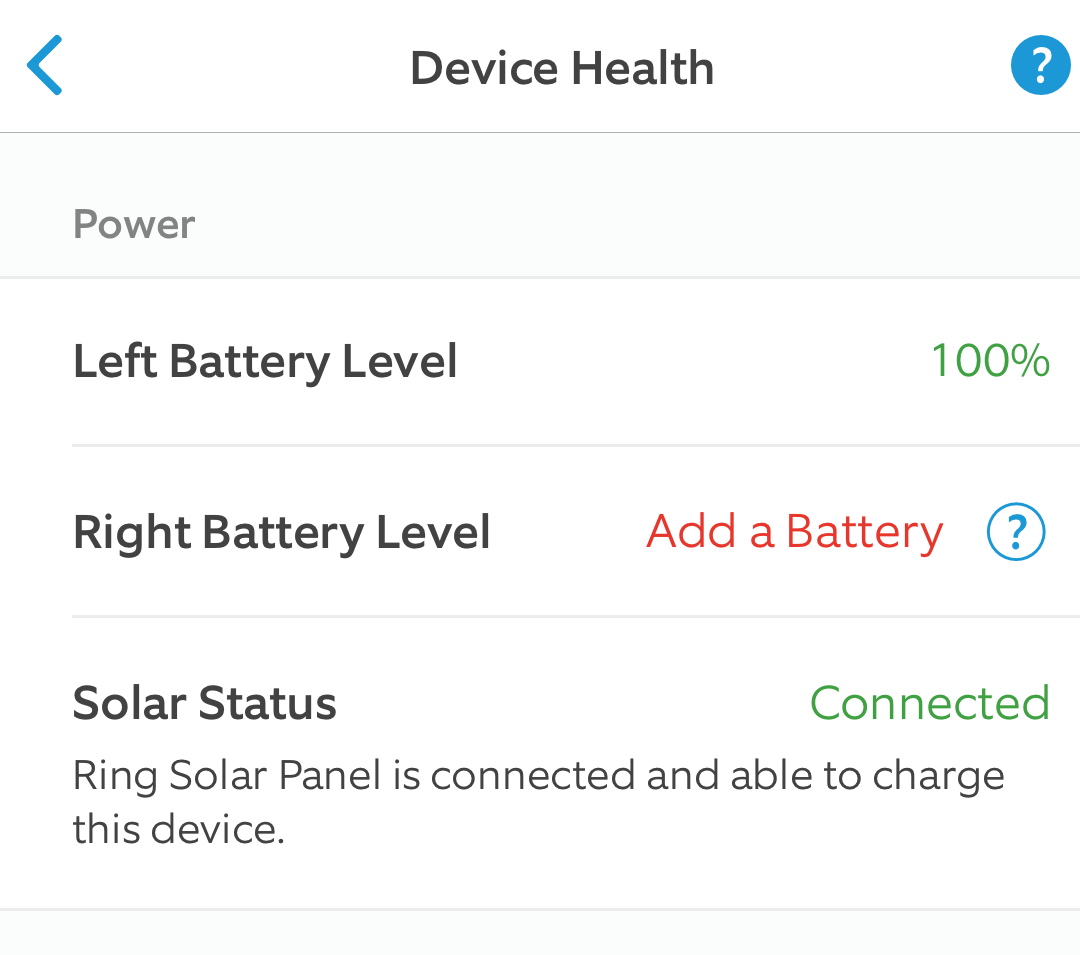 My guess is that there is something (hardware? software? combination?) in the Spotlight camera that allows it to detect the variable voltage that is coming through the power port to differentiate between AC and solar power. This seems to be missing from the Stick Up Camera.

There maybe some sort of overchage logic that is in all the cameras to stop the batteries from being charged when they are fully charged and the camera is plugged into power. That maybe why the Stick Up Cameras, while still getting power are not charging up their batteries – since the second they get power through the port via the solar panel, they start reporting that the battery is fully charged.

I do like the Ring cameras and the Ring app. The app itself is very well laid out and makes getting to different things easy. The cameras are easy to setup and install, each taking 15 minutes or so. While the Ring cameras, even the wired Indoor Camera I have in the garage, do not do continuous recording like my old NestCam, the Snapshots feature is nice enough.

Ring has some work to do to make things better. They need to fix the charging issue with the Stick Up Cameras. They need to standardize the UI for reflecting if a camera is charging via their solar panel. If they wanted to really make things clear, they can even indicate the amount of power the camera is receiving from the solar panel – bonus points if they could track the amount of electicity coming in over time, this would make it easier to explain to people that in the winter the panels are receiving less power from the sun.

Ring “support” personnel on the forums are not helpful with their cut-and-paste “chime in” replies (hard reset device, clean solar panel, unplug/plug panel, uninstall/reinstall Ring app). This sort of support does nothing except aggrevate customers who are already frustrated about their products not working.