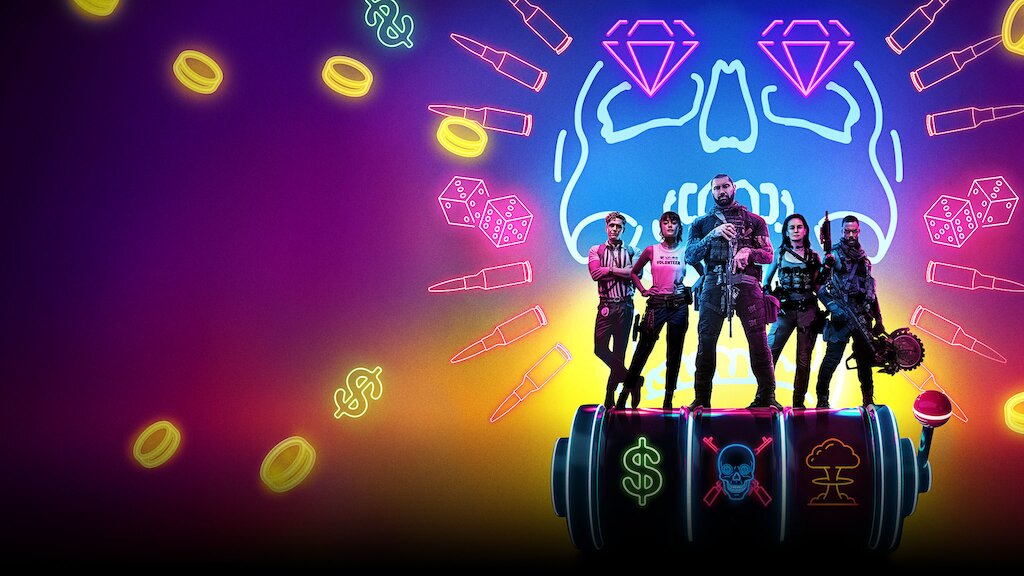 Zombies, a heist and Las Vegas! What a combination.

Las Vegas is overrun with zombies and is eventually walled off with shipping containers to quarantine off the zombies from the general human population. An amoral casino owner, Bly Tanaka (Hiroyuki Sanada) wants to get his money that is trapped in the vault at his casino and he approaches Scott Ward (Dave Bautista) to put together and lead a team for this mission. Ward was one of the people that helped to contain zombies in Las Vegas while rescuing people at the same time. After fighting hard and saving so many lives, Ward finds himself as a fry cook at a tiny burger restaurant. Ward has dreams of opening up his own restaurant or food truck – and eventually making things right with his estranged daughter, Kate (Ella Purnell). Tanaka gives Ward an offer that Ward cannot refuse.

Ward puts together a team of people to help him get into Tanaka’s casino located in the middle of zombie infested Las Vegas. Putting bookends to this heist is the fact that the US government is launching a nuclear missle in four days to wipe Las Vegas and its zombies from the face of the Earth. Among the ragtag team are: Maria (Ana de la Reguera), a woman that fought with Ward in the early days of the zombie apocalypes in Vegas and who harbors feelings for Ward; Vanderohe (Omari Hardwick), a tough fighting man of immense depth and education; Dieter (Matthias Schweighöfer), who is possibly the most endearing character of the film, he is the safecracker of the team; The Coyote (Nora Arnezeder), leading the team into the zombie warzone; Peters (Tig Notaro), a helicopter mechanic and pilot; and Martin (Garret Dillahunt), the head of security for Tanaka.

The one side plot that weighed down the film was the one that involved the Kate character. The Kate character is saddled with the most annoying plotlines. One is her determined focus to act in irrational ways because of her hatred of her father not being there for her earlier in life – she does things like forcing herself onto the team going into the zombie zone. The motivation for her going into the zombie zone is an underdeveloped plot of her trying to rescue the mother of two children that we barely meet in the film – leaving us to not really care. Her character, throughout the film, does idiotic things that no normal human would do given the situation that the characters are in – things like running off solo into a sea of zombies with just a pistol and two clips, while leaving behind heavily armed men that could protect her.

Snyder borrows heavily from many movies for Army of the Dead. He borrows heavily from I Am Legend in the way that the zombies act and how the zombies have a social order. In I Am Legend, the “monsters” are vampires with a social order that includes an alpha and a queen. They communicate and are organized. Snyder’s zombies act and behave much like the vampires of I Am Legend. There are two tiers of zombies, the ones we’re used to seeing in zombie movies which meander around and shuffle slowly. Then there are the ones that were bitten by the Alpha zombie, they are intelligent and move with a ferocious speed. It is these quick moving intelligent zombies that are straight out of I Am Legend, the only real difference is that they are zombies and not vampires. The zombie tiger was a big bowl of win.

Given the large roster of characters in the film, they are all shells of characters and not developed at all. Though, the casting for most of the characters was brilliant and the actors all imbue their characters with things that make them standout. Tig Notaro (which I found out later was a last minute swap into the film) is great and funny and memorable (like usual). Ana de la Reguera was memorable as the tough as nails second-in-command. I really enjoyed the bromance between Vanderohe and Dieter – not only were they foils for each other, but when they eventually come to bond, it was a very nice moment. When will Garret Dillahunt ever get cast as a character that is not a bad guy?

Bautista is an awesome guy and I love watching him. But, the role he is given is not the greatest in Army of the Dead. His character comes off as clueless to everything in life: His daughter, Maria, Martin and even the reason why Tanaka wants him to go on this heist mission. Bautista is good in the film, unfortunately the role in the film is not good to him.

The ending of the film is a complete missed opportunity, more on this in the spoilers section.

I am not a fan of Snyder’s shooting style for this film. Instead of using his long time cinematographer, Larry Fong (who gets a nice tribute in the film), Snyder takes on the director of photography duties himself. And this results in a film that has mixed results to how it looks. For the first parts of the film, Snyder employs a very shallow depth of field for most shots. While it looks cool in some places, there are places where it is so shallow that even parts of a characters face are out of focus and that was very distracting. Snyder also uses natural lighting for a lot of the movie, sometimes as backlight. This results in overly dim scenes with very little contrast making scenes very hard to view.

Having written all of that, I did enjoy Army of the Dead as a brainless horror action film. It is excessive with its running time and gore, but it was entertaining enough to overcome those flaws.

Dillahunt’s character Martin is a straight cut and paste of the character Burke (Paul Reiser) from Aliens. Their motivation was the same (get a sample of the Alien/Zombie). They eventually stab their teams in the back (Burke locks Ripley in a room, Martin locks the team in a room). The only difference is in the casting of Dillahunt who, because he has been cast as a bad guy so much, projects that he’s up to something – that he is going to screw the team in the end. At least with Burke, the casting of Reiser allowed for the moment where he turns on the team to be a bit of a surprise. This is the only casting choice for Army of the Dead that I would call bad. I like Dillahunt and think he’s a great actor, but I think casting someone less “bad guy’ish” in the role of Martin would have been better.

The ending of the film is a missed opportunity. The twist that Vanderohe was bitten was as much of a twist as it was the risk-free predictable route to be taken – especially for setting up of a sequel. I would have loved a more unconventional and less predictable ending that still would result in a sequel: Vanderohe escapes from the vault as he does, he rents a plane as he does, he flies to Mexico City as he does. But, he is not bitten and he recovers from his wounds. He takes the money that he walked away with and seeks revenge against Tanaka for getting all his friends and team killed. On the other side, Kate dies in the helicopter crash, instead of living. Ward does not get shot in the head and is the new Alpha zombie that wanders off to start the next zombie apocalypse (I’m thinking in LA).