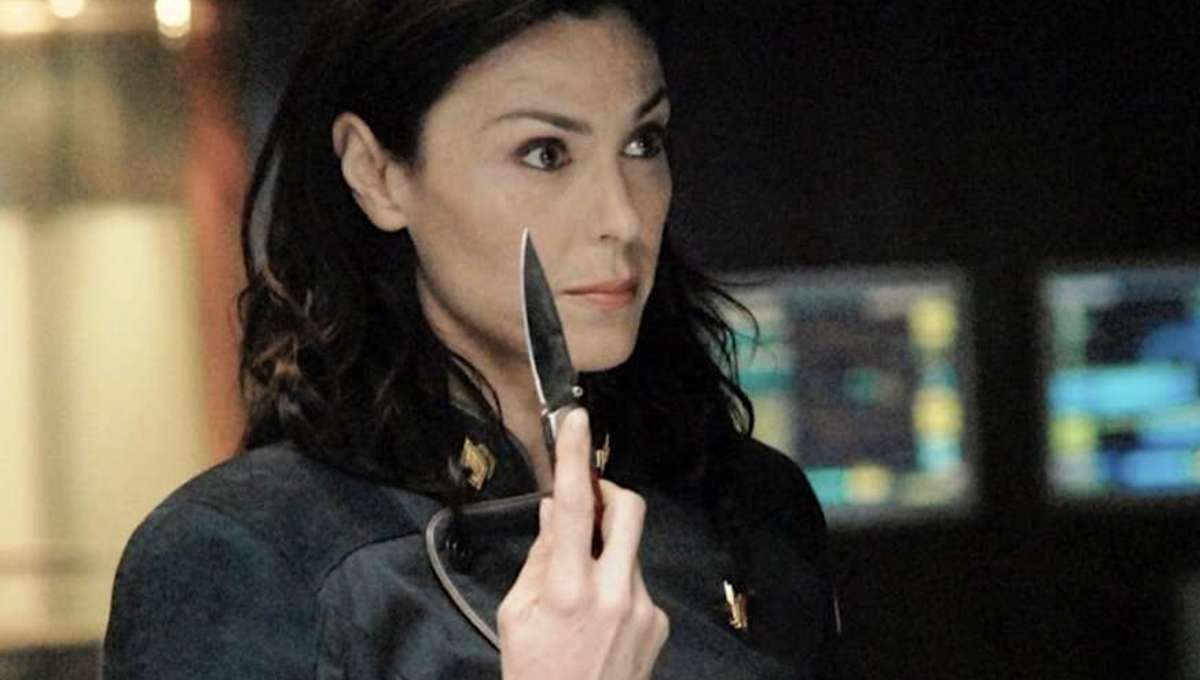 I never watched this fill-in film when it first appeared between seasons three and four of the original 2005 run of the TV series. By the time Razor was on DVD, I felt too much time passed since the show finished up and I felt I wouldn’t remember enough to make the film enjoyable (or understandable).

I have been watching Battlestar Galactica from the start over the last few weeks and based on an episode watchlist on Trakt, I watched this film right after I watched episode 17 (The Captain’s Hand) of season two. This film happens shortly after the events of that episode.

The story follows a new character, Kendra Shaw (Stephanie Jacobsen) who is a Pegasus denizen and officer. The film is told through flashbacks, which I find overused by the writers of Battlestar Galactica. It reveals much of the backstory of the Pegasus, Admiral Cain and events that are only spoken of during the regular season. Some events that are fleshed out are what happened with the civilians in the civilian fleet that Pegasus encounters; what happened with Gina and how she was caught; and also what happened when Cain’s first CO does not obey her orders (which is only told from the point of view of the new CO in the second season). The plot thread that weaves through the whole film is Shaw dealing with her demons.

In the end, I was entertained by the film – I watched the extended version and not the broadcast version, the differences between the two can be found here. The film does a great job at giving context to the Pegasus officers and lays out the story of why things happened the way they did – with great explanations of what drove the motivations of Cain, Shaw and the other Pegasus officers. The space battles are up to par with what is seen in the regular TV show and are exciting and fantastic. This film is well worth a watch if one is a Battlestar Galactica fan.

We also get more insight into the hybrid Cylon and also the old Centurion Cylons from the original series.

The film is well put together and is never boring. The plot of the film is put together well enough, but there was always a nagging feeling that it wasn’t up to the same standards as the TV series (which was still running at the time of this release). Characters seemed inconsistent in the film when compared to the TV episodes. The flashback to young Bill “Husker” Adama felt too coincidental and wedged into the storyline. It was hard to believe that of all the people in the colonies, that the man who is in command of the human fleet was that one guy who discovered the original Cyclon hybrid that has returned some forty years later. Yes, I get the premise in the series that things have happened before and are happening again – and that this may not be a coincidence in the writer’s minds, but the whole subplot there felt disingenuous.

The CGI employed were very hit-or-miss – and the Centurions were definitely a miss.

I did really like how the film filled in Cain’s story and helped me understand why she is the way she is and why she did the things (as repulsive as they are) she did. I was genuinely surprised at how the writers connected Cain with Gina as lesbian lovers. This explains why Cain had such a hatred of Gina. The childhood portion of Cain’s story also explained a lot about how Cain can disconnect herself so much. The writers did a good job of subtly showing how a person can fight to survive, but not really justify their own survival. Cain killed her own humanity to guarantee her survival. Was it worth it?

The one complaint I had about the film was the director’s (and writers’) fixation on the switch blade. I get that it is an object that that is supposed to connect us to the characters and the storyline – but, it was shown too often and shown for no good reason at all a lot of the time. The significance of the switch blade was lost because of its overuse on screen.

Of the main cast of the TV series, Lee Adama, Bill Adama, Laura Roslin, Baltar, Six and Starbuck show up in the movie. The other characters are Pegasus crew who are for the most part dead already.