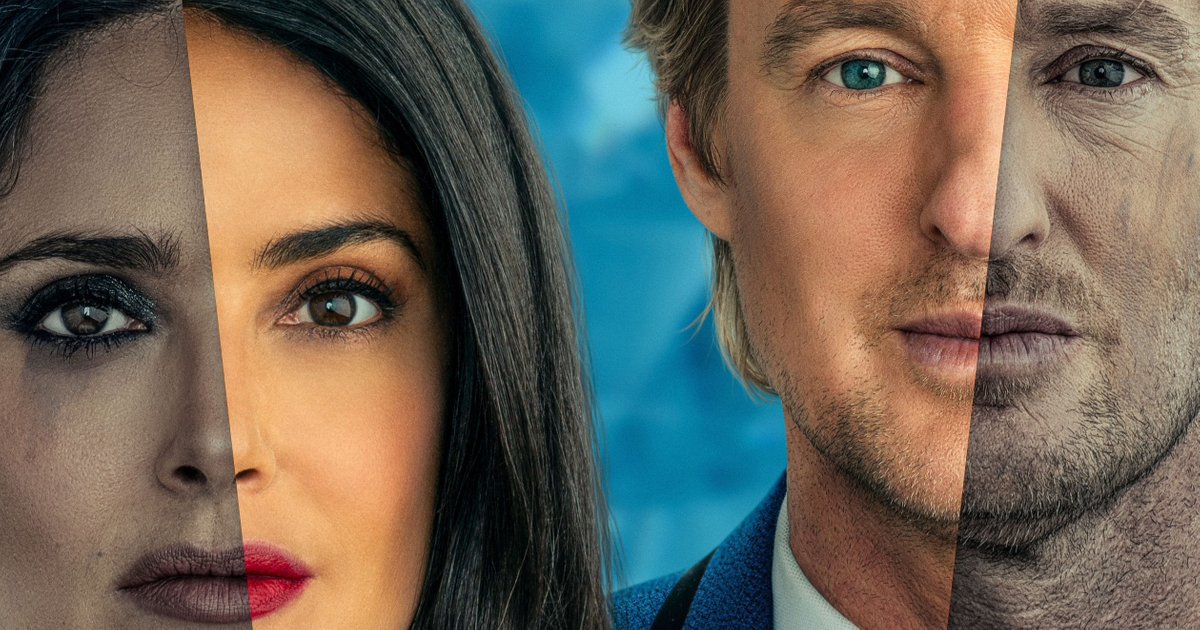 I’m going to cut and paste from my notes of Mike Cahill’s early film Another Earth for this review of Bliss – because even if there have been ten years between each film, they are so similar that my feelings for both are the same: “Can I have my 90 minutes back? This movie has bigger ambitions than it actually achieves.”

A broken man, Greg (Owen Wilson) struggles through a tough life. He is recently divorced, he is failing at his job and most recently he accidentally kills a man. While at a bar, he meets a woman, Isabel (Salma Hayek) who convinces him that the miserable world that he exists in is all just a computer simulation.

I will watch anything that Salma Hayek is in. She is such a talented and versatile actor. Owen Wilson, on the other hand is not strong enough of an actor to play opposite Salma Hayek. And Wilson is one of the weaknesses of Bliss, while he does have acting chops, I think he is miscast as Greg.

The problem with Bliss is the script by writer/director Mike Cahill which spends too much time building the two worlds that this film exists in. One of the worlds is built in a way that is hard to believe that it is real. This is a problem for the film because we are supposed to believe that is the real world. The construct of this real world never feels fully realized, nor does the backstory of how this world came to be. The Thought Visualizer bits felt cheesy and the tone of any scene mentioning or using that device was completely out of place. It doesn’t help that Bill Nye makes an extended cameo that is completely distracting.

The other problem with the movie and the script is that the ideas that are hinted at by the film, the ambitions that I can see in the film are never actually achieved. The film feels like Cliff Notes of Cliff Notes of a great novel. The ideas hinted at are so underdeveloped and vaguely used that there is no satisfaction. It is as if Cahill wanted to make the audience as miserable as Greg is and that’s not cool man, totally not cool.

I could write more about the film, but it would be more complaints. While there are interesting ideas that are presented, this film never achieves anything more than just flirting with the deeper meanings of what could have happened to the characters presented. And that is an unfortunate waste of the talent onscreen. Do yourself a favor and find bliss in a different film.

I find the premise of Bliss very interesting. Humanity has gotten to a point where everything is so great that it needs a simulation of a miserable world to help humanity appreciate what it has. This idea is better explored by the excellent TV show The Good Place, the idea is barely glossed over in Bliss. Worse yet, it is the theme that this movie is built on. Extending the theme presented by Bliss to the real world: Let the miserable experience of watching Bliss be a foil for all the better films available to be watched.

Isabel’s character changes drastically after they re-enter the Brain Box which is completely throws the movie off. It feels like a different character than the Isabel before they originally left the Brain Box.

I don’t understand how they could make a simulation device without a failsafe to allow people to exit. Why is it that the only way to exit is to rely on some made up crystal that is hard to find in the simulation? I get that it makes it so that the person in the simulation has to more at risk and therefore would grow to appreciate how hard life is. But, it seems like a total oversight not to have any emergency exit mechanism at all.