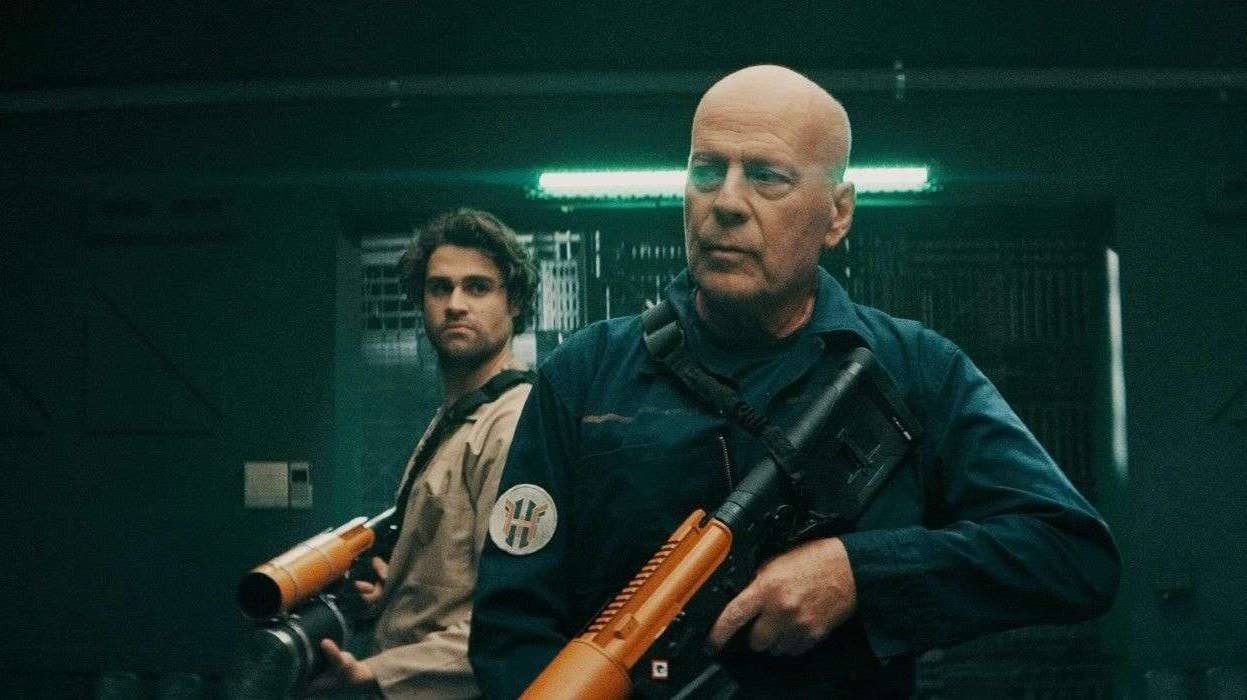 I don’t know why I do this to myself.

Noah (Cody Kearsley) is a stow away on the last ship taking off for New Earth. The year is 2242 and Earth has been rendered nearly uninhabitable for reasons unknown. Hayley (Kassandra Clementi) is pregnant with Noah’s child; she is the daughter of Admiral Adams-King (Thomas Jane) who is the head of this last ship. A mechanic with a very particular set of skills named Clay (Bruce Willis) takes Noah under his wing as a janitor.

Not everyone on Earth wants or believes in humans leaving Earth for another world – some believe that humans are a blight on an environment and will ruin whatever planet humans inhabit next. These people are everywhere, and one is on the ship, this unknown person releases a deadly disease upon the crew and all hell breaks loose on the ship.

On paper, this reads like it could be the basis of a “so bad, it’s good” type low budget science fiction movie. But the execution is so terrible that this movie is a waste of 92 minutes. This is a cheaply made zombies in space movie.

John Suit showed with 3022 that he can make a flawed but decent science fiction film. Maybe that was a fluke. Because his follow-up film Breach is a catastrophe. I finished watching the movie to see how bad it could get, and it surprised me with how deep of a hole it digs itself into. The movie obviously was budget constrained, but they could have worked around the budget better. The amount of weapons fired in the movie was substantial. The weapons fire itself was so bad it was laughable. The muzzle flashes were terrible, the flame thrower effects were just as bad, and the acid cannon effects were a color swapped version of the flame thrower. On top of all of those bad effects is the hilarity of the laser gun effects.

And let us not forget the man-sized ventilation ducts.

The script itself is awash in bad dialogue with many of the characters speaking like Captain Obvious – seeing what happened and then speaking it aloud. There are cheeseball lines like Noah asking Bruce Willis – I mean, Clay – “Are you some sort of badass?” Then there’s the Admiral telling his troops, “Watch your six, safeties off” while wearing dark aviator glasses in a dark hallway. The script and the direction generates more laughs (unintentially) than tension and suspense.

As for the actors in the film. Let us start with the headliner: Bruce Willis. He’s here to collect a paycheck and he’s basically playing the same character he’s been playing for years now. Willis hasn’t been the star of a truly great film for almost ten years (his last being Looper). Maybe it is time to retire Bruce? And if you are not going to retire, you really need to be choosier about your films. Willis is ruining his legacy late in his career with these mediocre to terrible films. Thomas Jane must have known how bad this film was going to be because he obviously cranked up the cheesiness for full entertainment. Jane chews through his scenes and it was fun to watch him – he does not have enough screen time though. Rachel Nichols is doing a mean impression of Jodie Foster being Ellie Arroway in Contact.

The actual protagonist of the film is Noah and portraying him is Cody Kearsley who spends an inordinate amount of time staring at things. And after he’s done staring, he stares a bit more. Impending doom coming directly at you Noah? Stare at it. Girlfriend stuck in a ship and you just finished the boss battle? Stare at the fallen opponent. Thinking about a way to solve a problem? Stare into empty space. There is so much staring, staring does not mean good acting, it just means you’re staring.

The ending came as no surprise because it was not so subtly projected early in the film. Plus, as the film went on, I figured they had to go for broke and this was the predictable outcoming. And when it did happen, it was executed so badly that it caused unintentional laughter.

Save yourself 92 minutes of your life. Skip Breach.

The ship that this film takes place on has artificial gravity, as seen by people walking around. That clearly means that technology exists to nullify momentum. Yet when the ship enters hyper-speed travel, everyone is thrown back into their seats.

Earth is in such bad shape that it is about to erase humanity from existence. Yet, Earthlings are still able to produce beer and bottle that beer in glass bottles? Not only that, but there’s enough weight allowance for crew to bring along their glass bottled beer?

Teek’s nihilistic reasoning for why humanity shouldn’t go to another planet comes true at the end. The irony.

The ship travels the distance it would take 30 years to travel at “normal” speeds, then has a final 180 days of travel before arriving at New Earth. I am assuming they could not hyper-speed directly to New Earth’s doorstep because they need time to slow down. But, is it really necessary to put everyone into hibernation if the amount of time to get to New Earth is around six months in total?