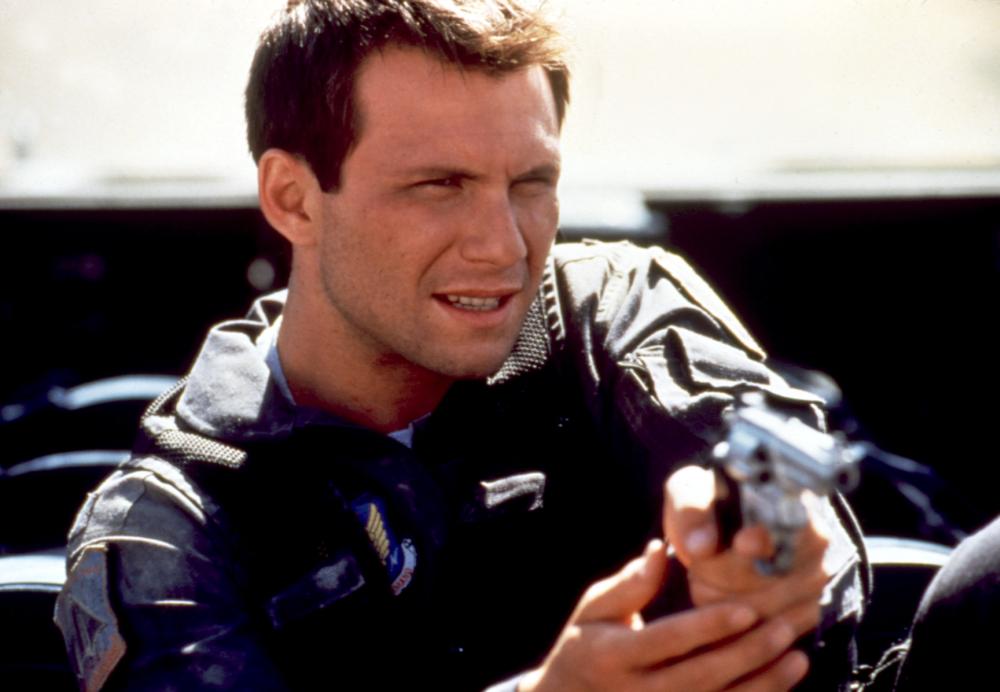 Broken Arrow is one of those films that I can watch in pieces – more specifically the action set pieces because of John Woo’s direction. Other than that, the movie is a mediocre chase film full of terrible dialogue and characters that do things that are not logical.

Two Air Force pilots, Vic Deakins (John Travolta) and Riley Hale (Christian Slater) take off in a secret B3 stealth bomber that is loaded with two nuclear bombs. Their training mission is to fly low over the Earth and see if another Air Force station can pick them up. Deakins has a different idea about what they are doing and a fight ensues in the cockpit. Hale is ejected from the jet and meets a hapless park ranger named Terry Carmichael (Samantha Mathis). Together Hale and Carmichael set off to stop Deakins and his band of rogue military personnel.

This film remains a guilty pleasure when I have nothing better to watch. Yes, I will complain about it, but it is entertaining in a strange way. The good things first. Slater is not an action hero and never really settles into being one in this film. But, that does fit with his underdog character in the film. Delroy Lindo isn’t given much to do, but as always, he is fun to watch. Howie Long, while not the main villain, would have made for a great main villain in this movie. The score by Hans Zimmer is memorable and he develops a great theme for Vic Deakins. The cinematography in the film is beautiful. The indoor scenes are mediocre. But, when the film gets outdoors, it is beautiful.

There are two major problems with this film. The script by Graham Yost amounts to nothing. The characters are flat, the plot is a Point A to Point B chase sequence. We are hit over the head so many times about the $20 bet between Deakins and Hale that it got grating. The characters don’t speak like real humans and poor Mathis’ character has a pile of this inane dialogue, for example “This is a really bad idea.” That may work in Star Wars, but it surely does not work here. Characters are so chatty in Yost’s script to the point of ridiculousness. Deakins basically stops in his tracks and tells Hale his plan. Hale stops in his tracks later to explain to Deakins that he figured out what Deakins was really doing and details everything out loud to Deakins. These two characters couldn’t keep a secret if it killed them.

The second major problem in the film is the casting of John Travolta. Travolta seems to think that squinting his eyes and gnashing his teeth equate to “being evil”. The fight sequence in the cockpit is hilarious because of Travolta’s hammy acting where he gives the evil squinty eyes to the back of Slater’s head. Travolta gnashes his teeth and says lines like, “Would you mind not shooting at the thermonuclear weapons?” So instead of looking truly menacing in his scenes, Travolta’s hammy, over-the-top acting makes him look like a goof ball. Which, at times, makes the film unintentionally hilarious.

And poor Samantha Manthis is reduced to being a tagalong with terrible lines.

Broken Arrow is an straight-forward action film that has good action sequences mixed up with some head scratchingly awful logic. Broken Arrow is definitely worth a viewing because of the action – which is the reason I do come back to watch the film every once in a while.