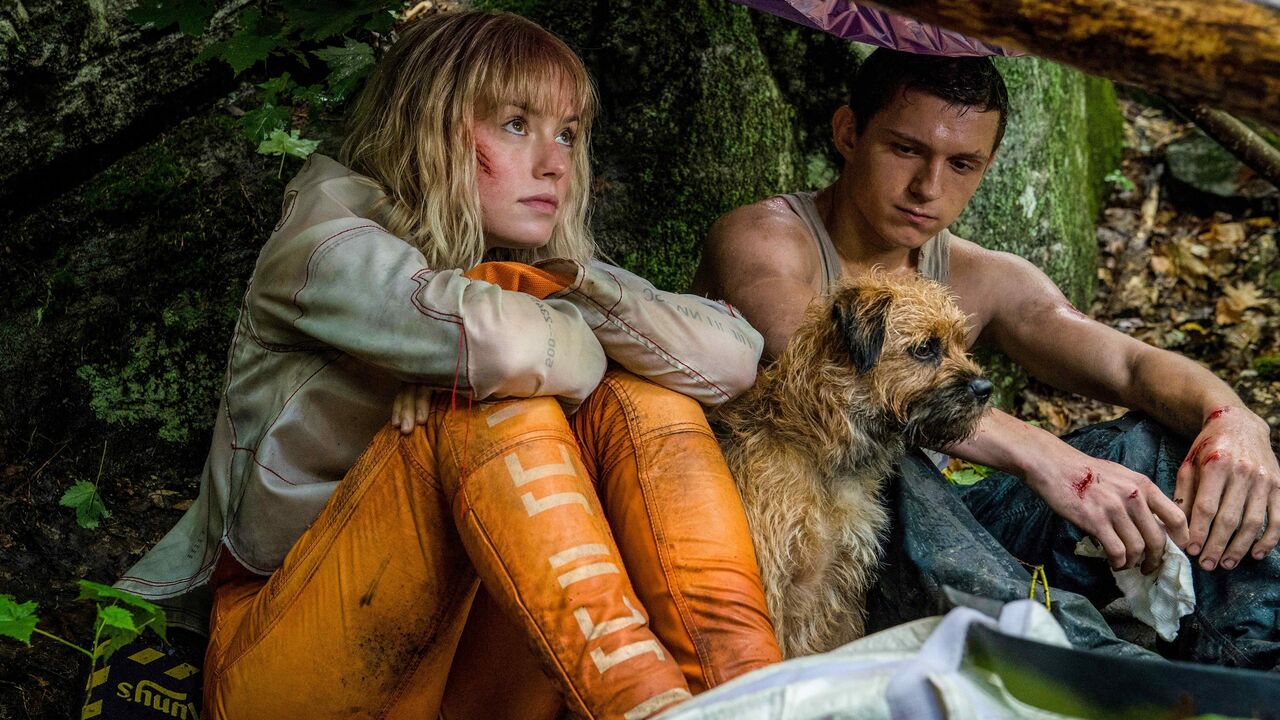 Chaos Walking takes place in the 23rd century on the creatively named planet “New World”. This planet is sixty years of space travel away from Earth – speed unknown. But, this planet has one special property, the thoughts of men (but not women) are on full display for those around them – both audibly and visibly. These thoughts are known by all as “The Noise.” The town of Prentiss, named after Mayor Prentiss (Mads Mikkelsen), has no women. Apparently the native beings, named Spackle, of the planet killed all the women.

When a ship crashes on New World, a mysterious woman named Viola (Daisy Ridley) is the sole survivor. She is discovered by Todd Hewitt (Tom Holland). Events push the two on the run from Prentiss and his town folk – leading them to discover what really happened to the original colonists of New World.

The performances throughout the film are generally okay. I feel like Mads Mikkelsen has played this kind of role many times – menacing, mean, angry and scary. Ridley is almost playing a version of her character Rey from the new Star Wars Trilogy. And Holland almost plays a version of Peter Parker. I wasn’t sure what was the deal with David Oyelowo and his character Aaron, but it was a bit over-the-top and distracting.

The problem with Chaos Walking is that the film is dull, painfully dull. The characters are not interesting, nor are they given any charactization or story arc throughout the movie. The quest that Todd and Viola embark on is inconsequential at best. There is a lot of running and some shooting, but these are bookended by long stretches of dialogue that is not engaging. I wish the script would have taken the film strongly in either the direction of action or drama.

While there is mention of what happened to the women of Prentiss town. The screenwriters conveniently ignore that dark backstory and never return to it. Nor do the screenwriters explore in any depth the consequences of men having their thoughts visible to all – it is talked about superficially, but Chaos Walking would have been a much better film had they explored this aspect. And because of this, the high concept is squandered.

I did like that the script chose not to create a romance between Todd and Viola.

The ending of the film does leave enough for sequels as this film is based on a trilogy of books. The movie itself leaves many things up in the air without explanation or closure – examples in the Spoilers section. I assume that the writers were leaving these open for future installments in this series. Given how badly the film did with critics, audiences and at the box office, I doubt there will be follow up movies in this series. Also, I am not sure I would return to see any sequels (if they got produced) given how mediocre this first outing was.

Chaos Walking is not as bad as critics say it is, it is just not very good and it squanders a damned interesting concept.

It was never explained what in the upper atmosphere that causes men to have The Noise. We see that it does happen there as Viola’s ship passes through it. We also never get to learn why it only affects men and not women.

Todd and Viola run into one of the native creatures of the planet, which the humans have named Spackle (why the humans picked that particulare name, I have no idea). There was a lot of talk about the Spackle that built up to this point in the film as the Spackle are blamed (wrongly) for the deaths of all the women in Prentiss. But, after this chance encounter and a short fight, the Spackle are never mentioned or seen again.

The reveal that there is another town on the planet, complete with children and women, did catch me by surprise. The twist that Prentiss had all the women in his town killed was not a surprise at all.