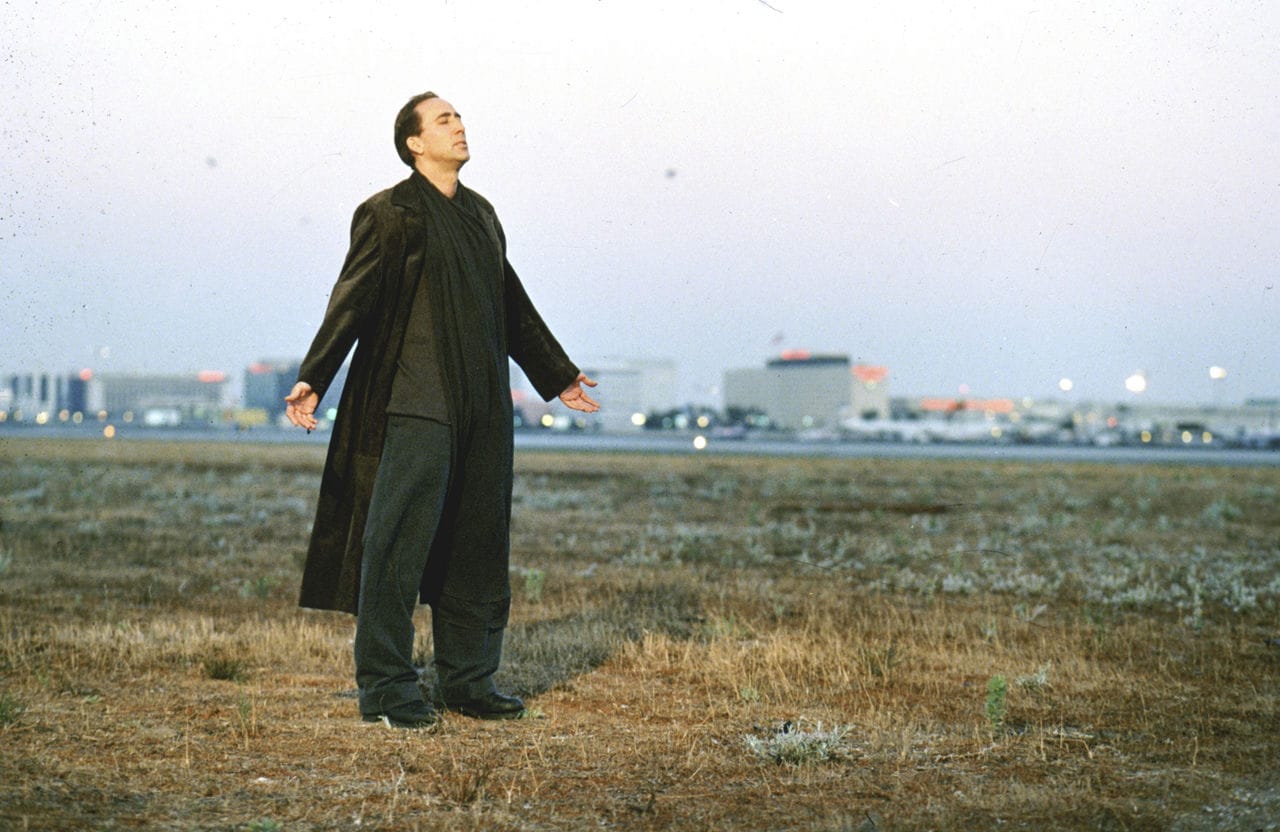 How many days have you watched the sun rise and fall? What does a pear taste like? How does a kiss feel from the one you love? What does the touch of a hand on your hand feel like? What is it like to love? When you die, what will be the best thing about your life?

Seth, the angel from City of Angels, wonders all of these things. Angels are fearless, can’t feel pain, are not afraid of heights and live for eternity. But what good is eternity if you can’t be with the one you love? Or as Seth puts it, “What good would wings be if you couldn’t feel the wind on your face?”

One day a heart surgeon, Maggie Rice (Meg Ryan), is working on a patient. She’s almost finished when the patient suddenly dies. Watching over this event is the benevolent angel, Seth (Nicolas Cage). Seth is so emotionally thrown by this event that he suddenly becomes visible to Maggie.

Seth wonders why she saw him. He also finds himself in love with Maggie, and returns to the hospital to follow her around, watching Maggie in distress. Seth finds himself increasingly attracted to Maggie. Then one day he makes himself visible to Maggie and tries to ease her pain. Just how well could a relationship between an angel and a human work? Seth finds out from a former angel that he has a choice to be human. But, in order to be human Seth needs to take a fall from Heaven and give up his eternal life.

City of Angels is not a spiritual film nor does it have any deep insights into the “life” of angels. It is a near-formulaic tearjerker and works for only one reason: Meg Ryan, who is radiant in her part as Maggie. This has to be her best work since Courage Under Fire. It is Ryan that makes the story wonderful. Ryan brings us into the love story and we do start to care for her Maggie much more than we do for Cage’s Seth.

Nicolas Cage, who has been toting guns lately (The Rock, Con Air, Face/Off), takes a break from the macho side of celluloid to return to some familiar ground. His portrayal of Seth the angel is not as good as it should have been. Cage spends too much time with puppy dog eyes and a soft voice. He seems just too mellow as the angel Seth.

There are many things worth mentioning about City of Angels. First off is the ethereal and stylish cinematography by John Seale (The English Patient). Seale films Los Angeles in such a fashion that what could look stale and flat now looks dynamic and large. The shots of solitary angels standing in high places are just wondrous. Kudos to John Seale for bringing such a different look to Los Angeles. Please look for the scenes in which angels congregate at the beach for sunrise and sunset. These are the most inspiring images that the film contains.

Worth mentioning is Andre Braugher from TVs “Homicide.” Braugher, as the angel Cassiel, puts in a better angel performance than Cage. Dennis Franz from TVs “NYPD Blue” makes an appearance in City of Angels and, next to Meg Ryan, his is the best performance in the whole film.

The score by Gabriel Yared is haunting and memorable. In addition, the music by other artists fits the film well. Listen for Alanis Morissette’s “Uninvited.”

I didn’t care for one flaw. It’s not a huge flaw, but it is noticeable. The “twist” at the end is set up mechanically from the beginning of the film and I continued to wonder when it would happen. This renders the ending unclimactic, and I would have liked the film to end a few minutes earlier. However, as Cassiel reminds Seth, “That’s living.”

The script, written by Dana Stevens, is based on Wings of Desire, a 1988 film by Wim Wenders. I have not seen Wings of Desire so I can’t comment on how these two films differ.

City of Angels is one of the best angel movies to be released lately. I admit that the film tugged a few tears from me. See City of Angels for the wondrous imagery and for Meg Ryan. Don’t Miss City of Angels on the big screen and bring a loved one to see it with you; this is definitely a date film. Now, if you’ll excuse me, I’m going to watch the sun go down.