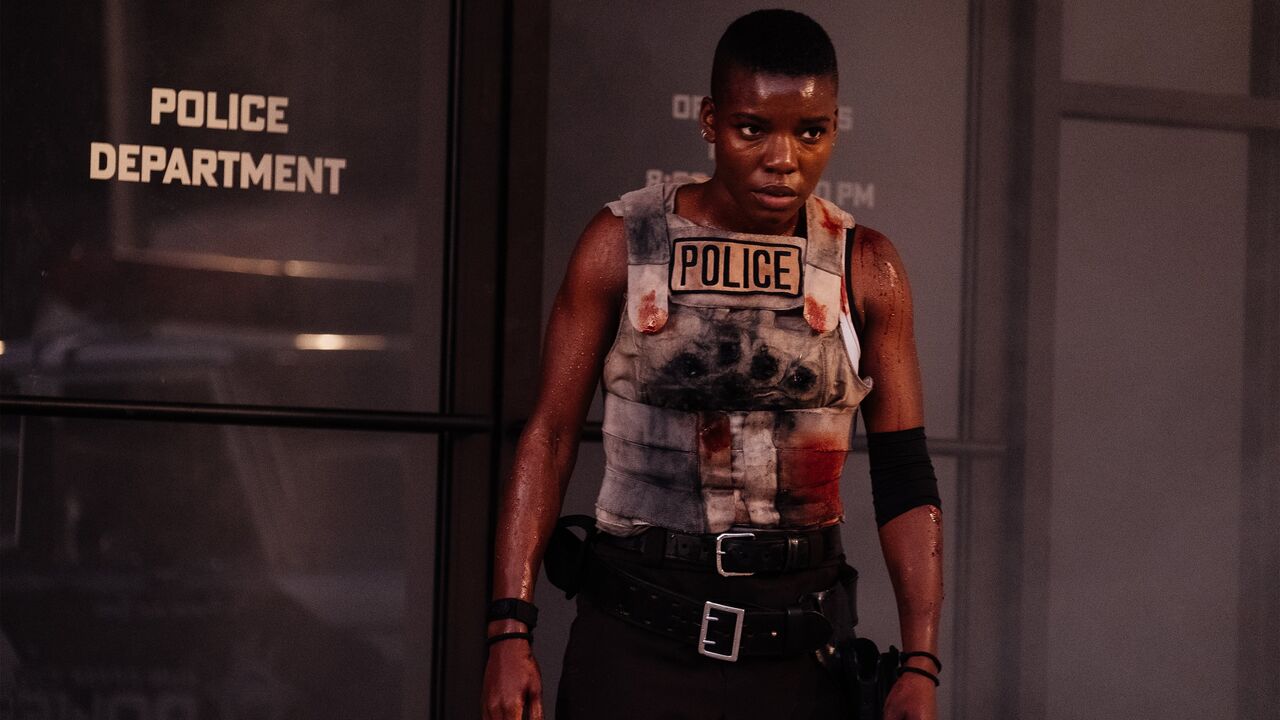 I have been a fan of Joe Carnahan’s work, both as a director and writer, since seeing his short Ticker for the BMW short film series The Hire. I am always looking forward to seeing what he does next. I am also a fan of the underrated Frank Grillo, the man needs more work and attention. So, when I see movies that have both men attached, I am always excited to see what the movie is like and I was curious to see if Copshop could top their last outrageously entertaining outing together Boss Level.

Small town cop Valerie Young (Alexis Louder) gets socked in the face by Teddy Murretto (Frank Grillo) in front of a Nevada casino. Why? Because Teddy is on the run from a hired assassin, Bob Viddick (Gerard Butler) and figures that by going to jail, he will be safe. Unfortunately for Teddy, his scheme runs into a wall when someone arrives in jail with him.

There’s not much story in Copshop, there’s backstory about Teddy and why he’s being hunted, but it’s run-of-the-mill backstory. But, I was not expecting much from a script by Carnahan. What I expect from him was witty dialogue, quirky memorable characters and violence, lots of violence. Carnahan’s script delivered on all three in measured controlled bursts.

Lets just get this said upfront: Alexis Louder is a movie star. She is absolutely fantastic onscreen and commands each scene she is in. She holds her own against Gerald Butler and Frank Grillo, even besting them at times. Gerard Butler is a hoot to watch and mesmerizing as Viddick, he hasn’t had a performance or character like this for a while and it is nice to see him back in form again.

As for Grillo, I feel his part was either reduced or not written well enough. Grillo’s character was a bit short shafted. In this movie, the tension should have been an equilateral triangle between Young, Teddy and Bob. But, as the movie is presented, the leg for Teddy seems quite a bit shorter than those of Young and Bob – and because of this, I feel that Grillo was underutilized in the film. Again, Grillo is an underrated actor and deserves so much more than having a cut down character. Grillo is again fantastic on screen, but I think it could have been much more if he had been provided a meatier part to play.

Carnahan is again on point with writing and directing. This movie is not as kinetic as his other films – especially when compared to his previous movie Boss Level. Copshop sags a bit in the middle and loses some steam. But, when there is action, it is kinetic without being completely chaotic – something that other action directors should take note of – making the action scenes thrilling. The script itself lays out plot points early in the film that get nicely targeted and taken out later in the film.

Other than the saggy mid-section of Copshop and lackluster character Teddy, I have one more complaint about the film and it has to do with one quirky character: Anthony Lamb. I can see how some may like the character, but he was a bit too much for me. While other characters have their quirks – for instance Young with her revolver and Teddy with his hair and 70s dress – these quirks were closer to the real world. Lamb on the other hand was out of this universe quirky and mawkishly cartoony. Yes, he is a memorable character, especially because of Toby Huss' performance, but he is also a terrible distraction – taking me out of the movie each time he was on screen.

In the end, Copshop was an entertaining escapist B-film from Joe Carnahan. I thoroughly enjoyed the movie, it may not have been as good as his previous film Boss Level, but it is still good enough for a viewing.