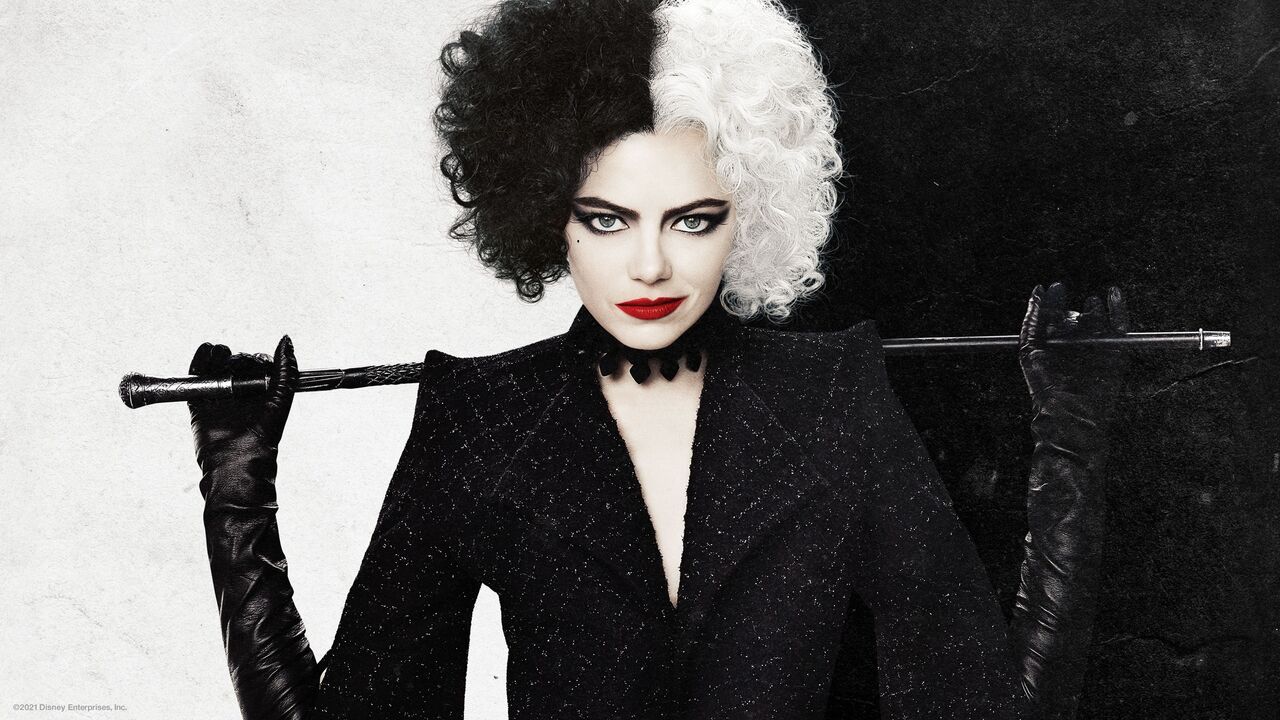 “What’s the angle?” asks a character in Cruella when Cruella gets a job. The same can be asked about this movie. I admit, I haven’t seen the animated One Hundred and One Dalmatians since I was in elementary school. I have not seen the live action 101 Dalmatians at all. So, I don’t remember much about the character of Cruella de Vil other than she kidnaps Dalmatians.

Estella Miller (Tipper Seifert-Cleveland) is a highly creative and intelligent young lady with troublemaker tendencies and a distinctive hair color – one side white, the other side black. After some trouble at school, she and her mother plan to move away to London. They make one stop at a castle so that her mother could ask for some help from an old acquaintance. Things go horribly wrong when Estella sneaks in to see the fashion show and ends up witnessing her mother’s death. Estella eventually finds her way to London and befriends two orphans (Jasper and Horace). Together, the three of them work cons and steal to survive.

Flash forward ten years to where we see Estella (Emma Stone) getting the gift of a lifetime from Jasper (Joel Fry). She gets to work at the retail store of famed fashion designer The Baroness (Emma Thompson) and eventually earns her way into the graces of The Baroness herself. From here, Estalla starts working as one of The Baroness’ designers.

The backbone of the film is a revenge film and surprisingly, it is a strong story that this film rides on. But, along with the story and plot, this film is great because of many other things.

Visually, this film is a feast. The camera work is amazing in this film, especially in the first hour of the film. The production design and look of the film is much like the fashion that is feature in the on screen: Meticulous and gorgeous. The humor in the film is spot on and had me laughing out loud. This movie has a good infusion of cool throughout.

The film is further perfected by the performances of the two leads: Emma Stone and Emma Thompson. Both are wickedly good in this film – and wicked in general. Joel Fry as Jasper, Paul Walter Hauser as Horace, John McCrea as Artie and Tipper Seifert-Cleveland as Young Estella are also fantastic in the film in their supporting roles.

Parts of Cruella felt a lot like The Devil Wears Prada.

I thoroughly enjoyed Cruella. Yes, the character Cruella did not need an origin story, but boy what a good one this was.

Cruella can easily be seen as Disney cashing in on older properties instead of bringing new original characters and stories to screen – and this is very true. Disney is guilty of churning out unoriginal content for years now – and I am sure they will continue to do so in order to build up more content for Disney+. Cruella is no different, but it does have a saving grace. The saving grace of Cruella is that it is so well made, so deviously scripted, so wickedly acted and so damned entertaining that Disney could be forgiven for dipping into their legacy movies for characters.

The twist about Cruella’s mom was a nice one.