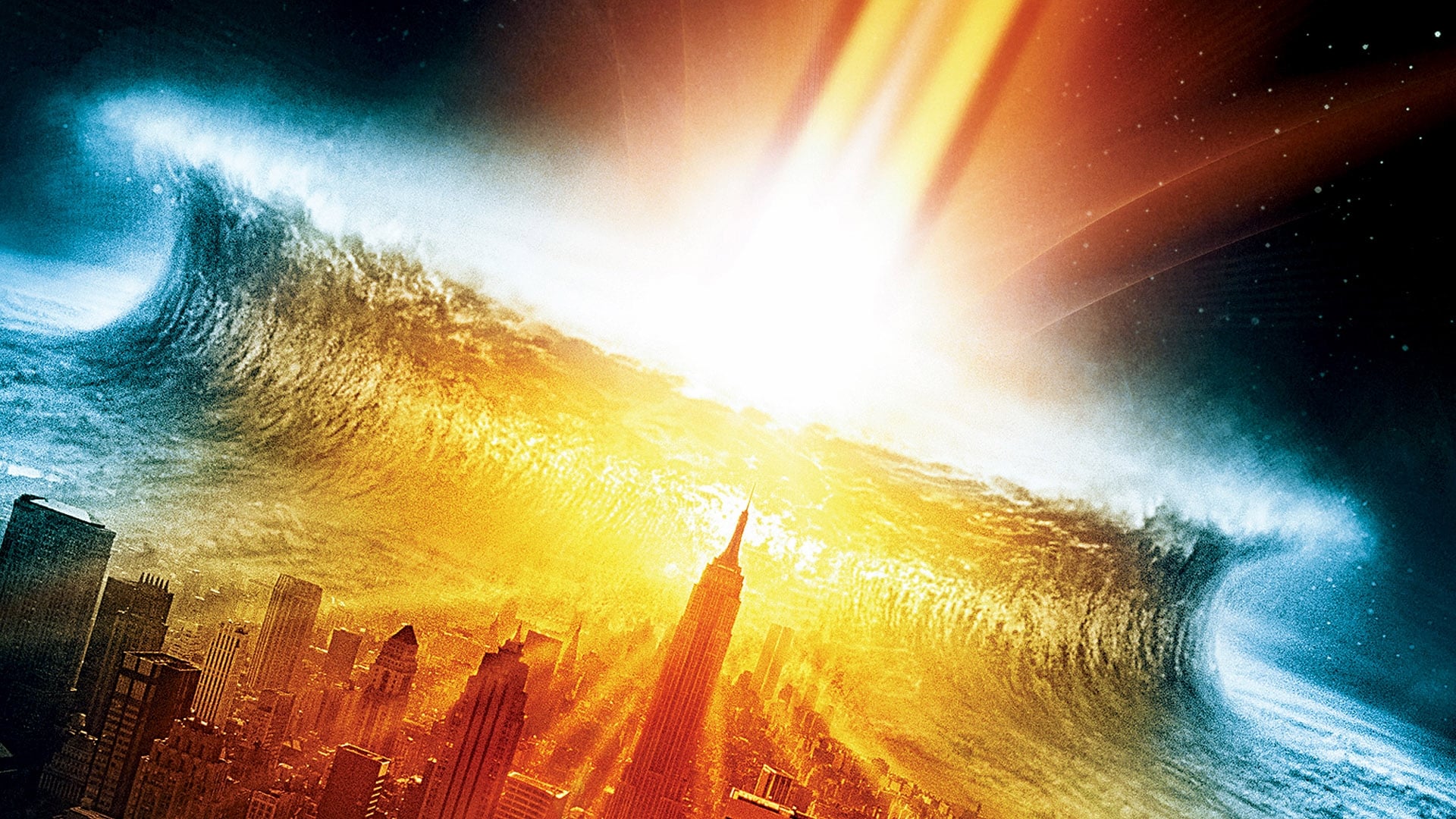 I have not seen this movie in years. Does it still hold up after 23 years? Kind of. It is definitely better than the Michael Bay film Armageddon that was release later in the same year. For the synopsis of the movie, read my original review below.

The movie’s main emotional hooks still work. The biggest emotional hook that worked was the one between Téa Leoni’s character Jenny and her father. To a lesser degree the relationship between the two teenage kids Leo (Elijah Wood) and Sarah (Leelee Sobieski). Strangely enough, the tiny storyline that was given for Laura Innes’s character Beth and her daughter worked well too.

But, as I wrote originally, there are too many characters in this movie and they are spread too thin for any emotional attachment. I wish they had given more weight to Robert Duvall’s character Spurgeon Tanner. The same for Vanessa Redgrave’s character Robin Lerner – I think Redgrave’s character’s short story arc should have been given more screen time and development. The potential for a powerful and impactful story with just that one character, not to mention a strong actor like Redgrave, was all there – and is a missed opportunity by the writers and director by not expanding more on that character.

Most all of my thoughts about the film from 23 years ago still stand. This film could have done with less characters and more focus. The structure and framework for a really great film is in Deep Impact, but it struggles because of all the extra weight. The film feels superficial because of this.

The special effects in the film were already shaky back when the film was originally released, so they really did not hold up well years later. Some of them are still rather impressive – the space shots of the comet and also the shots of the smaller comet racing overhead are impressive. The water effects are less impressive now though as they are fuzzy and unconvincing. The destruction of the East Coast holds up well.

Deep Impact is not a bad film, but it definitely could be better. It has, for the most part, stood the test of time – if one can overlook the fashion of the 90s.

What would you do if you had only a year left to live? How would you spend your final days on Earth if you knew that all life as we know it would be wiped out in a year? These two are the major questions pose by 1998’s first of two outer-space-object-strikes-Earth movies, Deep Impact.

The other movie, Armageddon, starring Bruce Willis, will be released later this summer. Armageddon is billed as the feel-good sibling of these twin movies. If that were the case, then Deep Impact would be the morose one of the two. And the film proves that it is.

Deep Impact starts off with a young astronomy student, Leo Beiderman (Elijah Wood) discovering a large comet. What he doesn’t know is that the comet is headed straight for Earth and is an E.L.E., extinction level event. The comet is 7 miles long and 500 billion tons in weight, roughly the size of Manhattan and the heft of Mt. Everest. The only thing on its mind is to keep on coming towards Earth. After we learn all of this, the story falls into a grove that follows a MSNBC reporter, Jenny Lerner (Tea Leoni), who is investigating a report of a sex scandal in the White House and stumbles upon the E.L.E. Having poked around a little more, she discovers enough to “force” the President of the United States (Morgan Freeman) to announce what is going to happen to the Earth.

The Americans and Russians have not been sitting idly on their hands waiting for the comet Wolf-Beiderman to come and wipe out humanity. During the year that the comet was only known to the two governments, they have been building a spaceship to fly out to the comet. The plan is to plant some nuclear devices on the comet and blow it to pieces. This mission onboard the spaceship “Messiah” is lead by old-timer Spurgeon “Fish” Tanner (Robert Duvall). The US has also taken other precautions; it has built vast underground caves that can hold a million people for up to two years.

The script by Michael Tolkin (The Player) and Bruce Joel Rubin (Ghost) fails in one way: It tries to look at the disaster from the viewpoint of too many characters. When I look back at Titanic, the movie works for one reason: the focus of the story is on only Jack and Rose. Therefore, we can emotionally bond with them and understand what they are feeling when disaster strikes. With Deep Impact, though, there are many characters vying for screen time and they are not given it. This leaves us trying to follow the stories and trying to identify with a lot of stock, two-dimensional characters. When disaster strikes, we are not emotionally attached and are left to seeing images of women giving up children, families reuniting, and families torn apart. I expected a little bit more from Bruce Joel Rubin. He wrote a movie that I respect, a mixed horror-thriller named Jacob’s Ladder, a thought provoking film about death and dying. I’m not sure why Bruce Joel Rubin did not move that same thought provoking type of writing up to the next level with Deep Impact.

The big names attached to the film, Freeman, Duvall, and Vanessa Redgrave are for marketing purposes only. Their parts are marginal at best. Duvall has the largest of the parts. I’ll say this though; Freeman looks and acts like a real President and is the best onscreen President yet. He’s even better than Harrison Ford (Air Force One). The major part goes to a stiff Leoni, who doesn’t seem comfortable doing newscasts. Leoni, who is a gifted comedic actress, is somewhat miscast to in the part of Lerner.

Another person out of place is composer James Horner. The score for Deep Impact is exactly the same score for Titanic minus the haunting vocals. At some points it sounds as if Horner took a short vacation and had someone dub in his Titanic score for particular scenes. For those of you familiar with Horner’s work, his scores tend to sound the same: His Titanic score sounded like his Braveheart score, which in turn sounded like his Apollo 13 score, etc. But his music for Deep Impact is embarrassingly lifted from Titanic. Shame on you, James.

Now for the really bad news: If you’re going to see Deep Impact for it’s special effects and destruction of eastern seaboard cities, you’ve seen it all already in the trailers and TV spots. Yes, we can blame the idiots in the marketing department for showing all of the good stuff during the advertisements. I’m unhappy to say that the advertisements are also somewhat more enjoyable than the film in the department of Earthly destruction - in the ads we don’t have to wait an hour and forty minutes to see the destruction. Though some of the special effects are stunning - the huge tidal waves rushing at the screen are phenomenal - some are out of the 1970’s. The worst effects the ones portraying the astronauts in space and on the comet.

Mimi Leder (The Peacemaker) does an effective job directing Deep Impact. Though she has tamed her over-usage of steady-cam shots, she is still using too many of them. A few scenes in Deep Impact could and did make some of the audience seasick. One example is a shot in the MSNBC newsroom where the camera continuously spins around stopping to focus on different people showing their reaction to bad news. Mimi, did we really have to spin the camera around like that? It doesn’t make for a more realistic shot; it makes for a shot that looks like some teenager with a new camcorder shot it. One shot that was powerful, though, was of the traffic jam on the freeway, which made a tingly feeling shoot up my spine. With Deep Impact, Leder shows us, as with Peacemaker, that she is very able to direct a large film. With Deep Impact, though, we see that what Leder needs is not a large cast of A-list players but a good solid script. Leder made good with the weak Peacemaker script, and she does the same for Deep Impact, but she deserves more.

Talking about MSNBC, the product placement and affiliations are tremendous in Deep Impact. For example: Leoni is from NBC’s show The Naked Truth, Leoni’s reporter Lerner works for MSNBC, and when Lerner goes to look up E.L.E. she uses Microsoft’s Internet Explorer 4.0 to search the MSNBC site. There’s the miscellaneous cast: Laura Innes and Ron Eldard from NBC’s ER. And don’t forget the people behind the camera: Director Mimi Leder of ER fame and Producer Steven Spielberg, who also produces ER. It almost seemed as if Deep Impact was a made-for-TV movie for NBC.

Deep Impact does bring up a lot of questions that we should ask ourselves. And it did make me think of some things that I wouldn’t have otherwise. But, it is not as moving as it could have been. I don’t hate Deep Impact; I rather enjoyed it. But, there is one thing that pokes me in the side when I think about Deep Impact: it could have been so much better with a tighter script.

With a name like Deep Impact, the film should have made more of an impact on the audience. Instead, it only leaves a shallow impact. And with Godzilla coming out soon, Deep Impact will be nothing more than a Deep Imprint. Godzilla will easily stomp Deep Impact because of its string of special effects and bundles of tantalizing ads. Catch Deep Impact at a theatre near you, but only during a matinee showing. Now I am looking forward to the second of the objects-from-outer-space films, Armageddon. I’m sure that the mindless action and continuous special effects of Armageddon will be the perfect cure for the morose feelings left in me by Deep Impact.