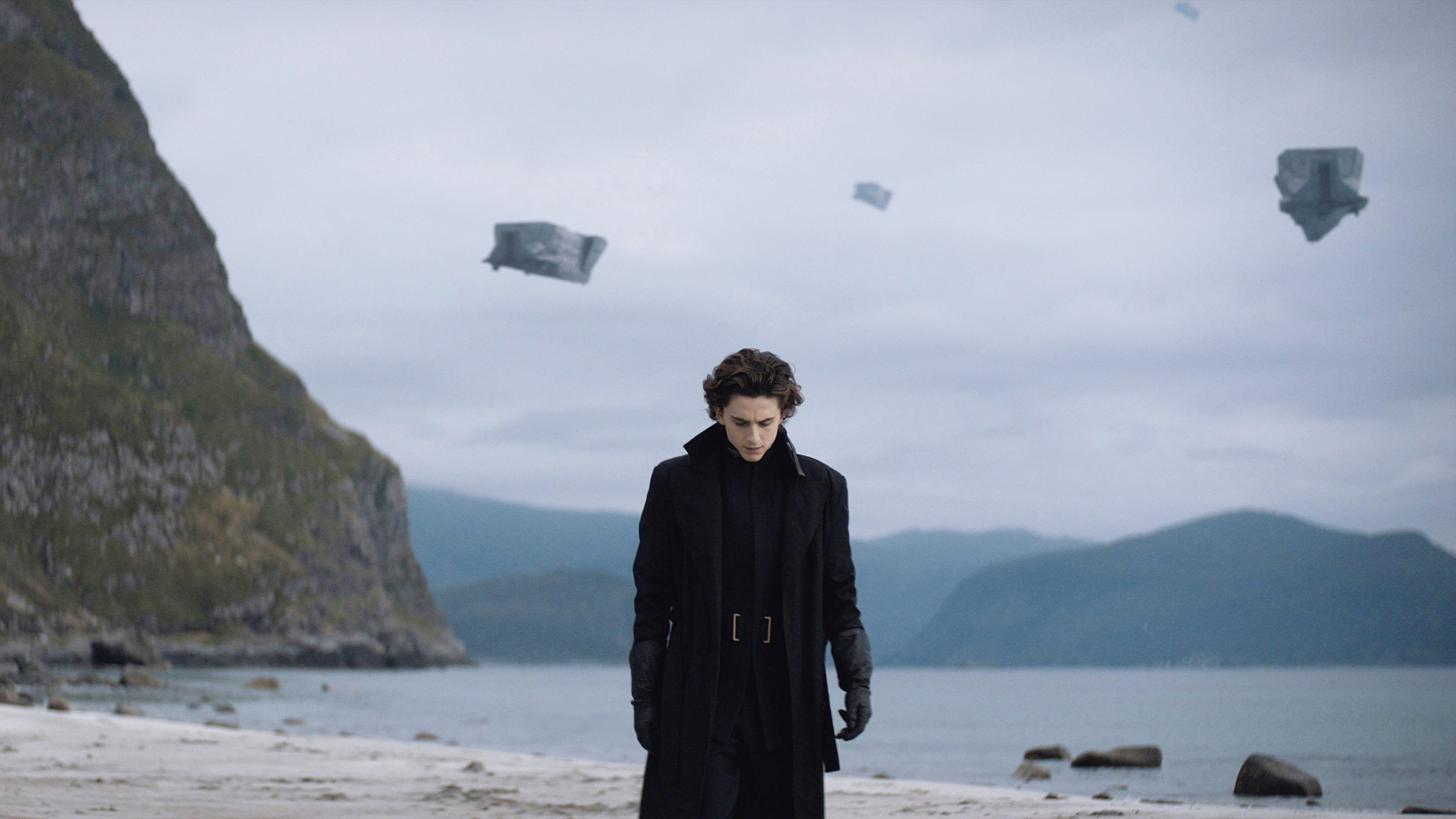 My high school English teacher, Mr. Vosovic was a huge fan of Frank Herbert’s Dune. He had an genuine excitement about the series and encouraged all of us to read it. I did not read it until much later in life and when I finally did, I was amazed at how great the book was – not only did it build a universe, it layered on top of it intrigue, politics and action. I have since read the first book multiple times (and also a few of the following books in Herbert’s original six book series). Herbert created what has long thought to be an unfilmable universe with a story whose breadth and depth are staggering.

I enjoyed David Lynch’s crazy pants vision of the Dune universe in his 1984 film, but what I really liked was the 2000 Sci-Fi Channel mini-series (and it’s follow up Children of Dune). The mini-series was a closer adaptation of the book and I appreciated that. I was curious to what Denis Villeneuve’s vision for Dune would be coming into this new movie.

The universe of Dune revolves around a substance called Melange or “spice”. Spice has many properties and benefits. The biggest is that spice gives humans the power to do computations like computers and therefore allows humans to travel through space. The only place that spice can be found is on the planet Arrakis (otherwise known as Dune). He who controls the spice controls the universe.

As the movie opens, the Emperor of the galaxy assigns the planet Arrakis to House Atreides as a fiefdom. House Atreides is to take over the harvesting and production of spice. House Atreides is taking over the planet from House Harkonnen. Head of House Atreides is Leto Atreides (Oscar Isacc). He has a son, Paul (Timothée Chalamet) who has been raised by his mother (and Leto’s concubine) Lady Jessica Atreides (Rebecca Ferguson) in the ways of the Bene Gesserit – a group of women that have special mental and physical abilities; and also has far reaching political powers. Also part of House Atreides are soldiers Duncan Idaho (Jason Momoa) and Gurney Halleck (Josh Brolin); and Mentat (human computer) Thufir Hawat (Stephen McKinley Henderson).

Villeneuve shows through the film that he is a true fan of the book Dune. His vision for the film is extravagant and a lot of it matches the visual imagery that I created in my head when I read the book Dune. He captures a lot of the small things from the book to make Dune fans happy. Things like the bull’s head, a terrifying rendition of The Voice, the very cool looking overshields and even the floating light globes. But, the best thing that Villeneuve and team brings to life are the Thopters – oh my goodness, those things are cool in every way. Also, the first sighting of a sandworm. Wow! The first sighting was exhilarating, especially for someone who has read the book.

As expected from a Villeneuve film, the production design is eye watering good and the visuals are stunning. Dune is a highly ambitious film when it comes to visuals. Each and every frame is a painting that draws the audience in. This movie captures the grandiosity of the world presented in the book and is spectacular.

That’s not to say that the movie is perfect in its rendition of Dune. The Baron was a bit odd and much smaller than I had imagined. I did not understand the stretchiness of the Baron either. It was weird how characters pronounced “Harkonnen”. And changing Maud’dib’s name to Mahdi was a bit off-putting.

In the book, there is much gravitas given to water. I loved how the film shows Caladan and the abundance of water on the planet before shuffling us to Arrakis where there is a noticeable lack of water. These disparate visuals make the point that the Atreides are fish out of water. But, I wish they had made more significance of how valuable of a resource water is on the planet Arrakis. There are small things throughout the film that show this (the watering of the palm trees, making coffee with spit, spitting as a means of showing respect, and the stillsuits), but they are not given enough weight. Water is also used in the books as a means to differentiate royalty from commoners, which is not played up as much in the film.

Hans Zimmer’s score adds a nice texture to the visuals.

I came into my first screening of Dune not knowing that it covers only the first half of the first book. This movie, subtitled “Part One”, serves as a world building film for the Dune universe and an origin story for Paul. Having read the book, I knew the story beats, so by the time the two hour mark hit, my brain was distracted thinking about at which point in the book the movie would end.

While I enjoy Denis Villeneuve’s visual style and his attention to detail, he is also clinical and technical to the point of sometimes making a film sterile of emotion. His style is much like that of a different auteur director, Christopher Nolan. Some things that are heavy emotional beats in the book are relegated to a few seconds on screen without much reverence. One big example of this is the sandworm rider.

Translating a book like Dune into a movie is all about smart decisions. Decisions of what to cut from the book and what to keep. Strategic cuts to characters and background details will often make or break a movie adaptation. Dune, written by Jon Spaihts, Denis Villeneuve and Eric Roth makes great decisions about what to keep and what to cut. There were minor things that got cut that may not have made a difference, for example the detail about Dr. Yueh and how his kind can never lie – this does not hurt the story, but it does take some texture away from a pivotal character. There is a lot of Dune specific words which are cut from the film. It isn’t great for those of us who have read the book, but it is great for making the film more accessible to mass audiences. A great movie adaptation will not capture all the parts of the book, rather it captures the spirit and heart of the book.

Dune is a great movie adaptation. I highly recommend Dune. 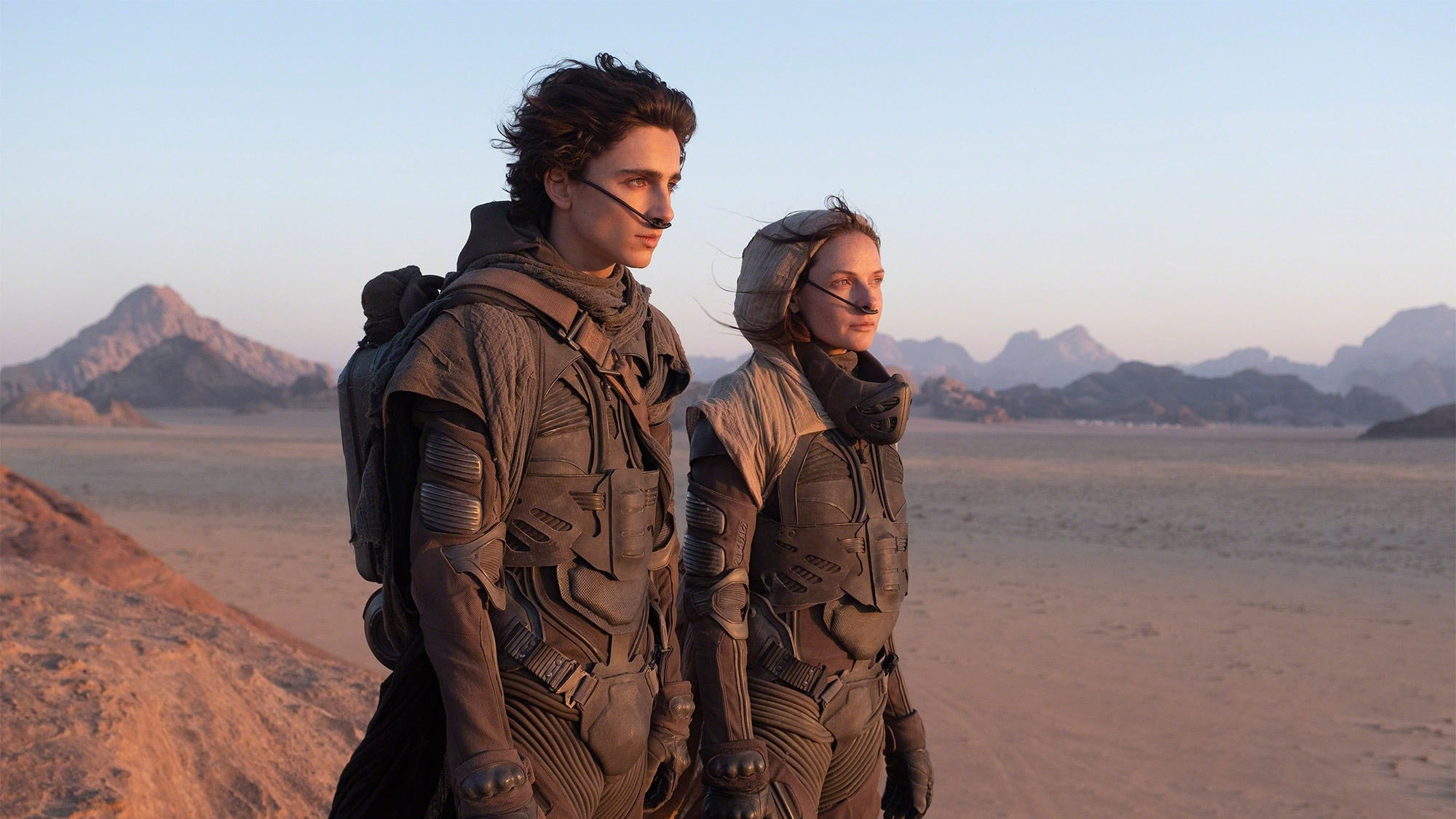 I streamed Dune on HBO Max and the picture quality in 4K with Dolby Vision was stunning. This movie should be seen on the big screen for full effect, but unfortunately because of the pandemic, I won’t be heading to the theater to see it.