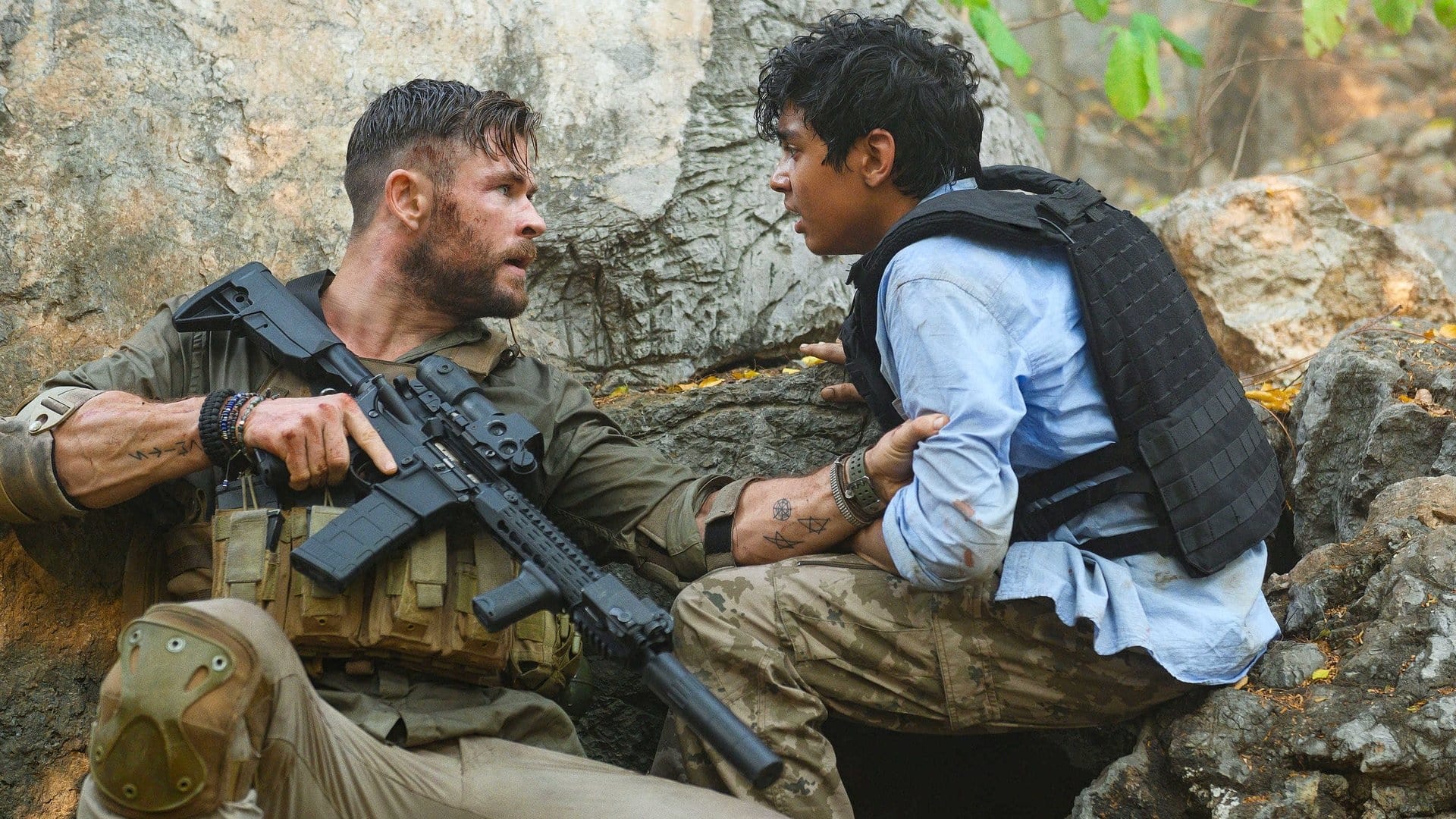 Extraction is a glossier and updated throwback to 80’s action films.

Tyler Rake (Chris Hemsworth) is an anti-hero punching-bag mercenary hired to extract Ovi (Rudhraksh Jaiswal), the son of an imprisoned drug lord from the grips of a rival drug lord Amir Asif (Priyanshu Painyuli). Along the way, Rake runs into others that would love to have Ovi’s head on a platter. That is about all there is for plot, it is not much and it is rather forgettable.

Extraction is gory, violent and loud with an assortment of squishy noises as humans are sent to meet their makers. The action in Extraction is creative at times and the action is often done well. Early on in the movie, there is a much talked about 11-minute pseudo-oner that was more of a distracting parlor trick than a thrilling action sequence. It is much like the movie 1917, which is one continuous pseudo-oner. It might be a technical feat, but the long one shots added no value to either movie.

The villain of the film is boring and uninteresting – he is nothing more than a clichéd cookie cutter drug lord who tortures people and spends his time scowling. The script makes him A Really Bad Guy by showing his perchance for having kids killed and cutting off the fingers of kids.

Also annoying is the discarded reality in the film. A good example of this is that two people get hit by vehicles. One man is hit by a car at high speed, while the other man is hit by a truck, also at high speed. The man hit by a truck is hit so hard he flies a dozen feet away before slamming into a parked truck. Both walk away from their vehicular encounters fine, nary a broken bone. I get that this is an escapist action movie, but can we at least pretend to have some semblance of reality?

I liked that Tyler refrained from killing little shit kids trying to kill him – and it put a smile on my face when he resorted to a good open-handed slap to teach those little shits a lesson.

Chris Hemsworth is fine in the film, he has the athleticism and look to pull off the role as Tyler – and he does it with aplomb. If there needs to be another assassin in the John Wick universe, get Hemsworth to be that assassin. Rudhraksh Jaiswal is terrible, often over emoting and overacting. It is always fun to see David Habour on screen and he proves to be memorable in his role in Extraction. Golshifteh Farahani is great in the film and is a badass without breaking a sweat.

Outside of the plot of Extraction being wholly forgettable, the other problem with Extraction is that the character of Tyler Rake is so paper thin and so clichéd that it is hard to empathize with him. Also, Tyler is basically invincible until the story needs him not to be – as if Thor traded Mjolnir for an M4.

Extraction is another movie in the long line of mediocre movies greenlit by Netflix in their pursuit of quantity over quality. I was disappointed that the screenplay came from Joe Russo based on a graphic novel written by him and his brother. I do not recommend Extraction unless you have nothing better to watch – and with streaming, there’s always somethinig better to watch.

Watched in the air on UA1825 EWR to SFO, downloaded from Netflix.