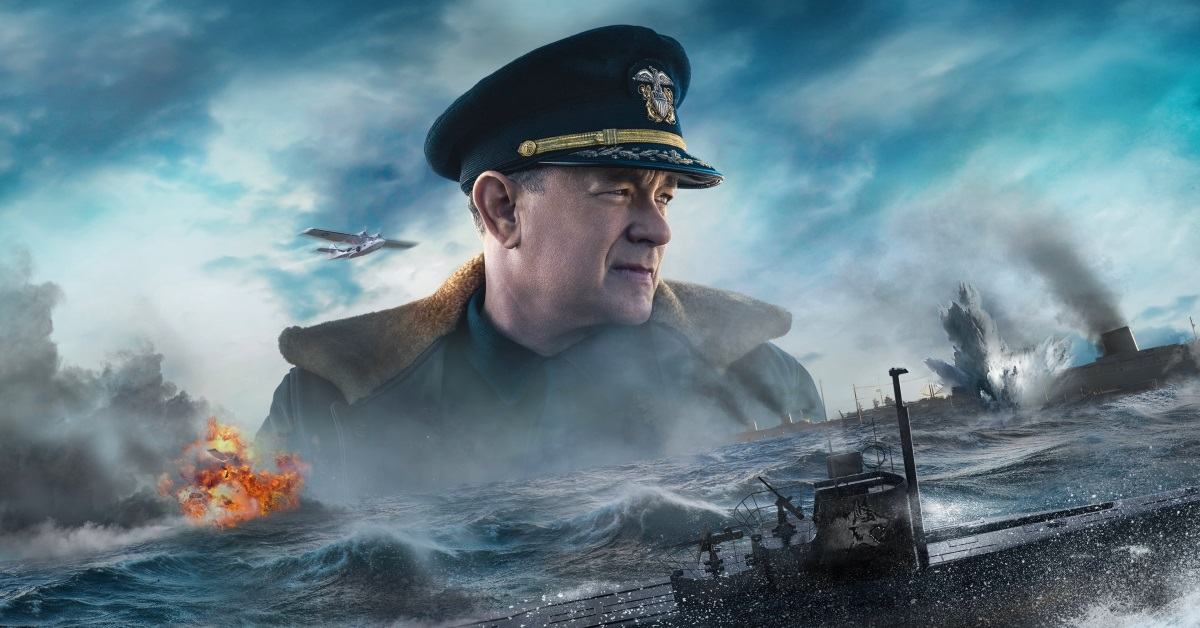 There’s something to be said about a script and a movie that has a singular focus on its character’s journey.

Greyhound takes place during World War II and follows the journey of first time captain Ernest Krause (Tom Hanks). There is a long section of the Atlantic named The Black Pit where convoys have to do without air cover because of the distance between the two coasts. It is here that Krause, while in command of the destroyer USS Keeling (codenamed “Greyhound”), is tasked, along with two British destroyers (Harry and Eagle) and a Canadian destroyer (Dickie), to protect a convoy of 37 ships from America to Liverpool. The convoy comes under attack by a pack of U-boats who harass the convoy for almost two days.

Greyhound is an efficient movie, its plot is straight-forward and moves with a pace that makes the 90-minute running time fly by. I admire the purity of the action that is put on screen by director Aaron Schneider. Greyhound is intense and engrossing because of the fluidity of the action and the constant barrage on the senses from explosions and quick-fire dialogue. Technically, the film is a wonder and I watched in awe and wondered how they were able to achieve much of what was put on screen.

The negative to such a tight script that is wrapped around nearly 75 minutes of action sequences is that the characters and plot development suffer – there really is no character development, Tom Hanks tries (and for the most part succeeds) in getting the audience to emphasize with a man who is terrified at the situation that he is in, but leads on with bravery because he needs to. The character of Krause (whom is not a real historical person) does not get a character arc and is only there to be one that the audience follows as the action unfolds. The plot is nothing more than following the journey of the convoy across the Atlantic.

Tom Hanks is great at playing unassuming characters that are forced to rise up to conquer remarkable challenges. He does that here and the movie would have suffered had it not been for him being the main actor. The rest of the cast does not get much to do other than repeat orders, look terrified or celebrate at small and large victories.

What is worth mentioning is Blake Neely’s score for the film that creates memorable themes – the one for the Wolf Pack is particularly good – and rises to the occasion to elevate the intensity of an already intense film. Kudos to Neely for his work on this film.

In interviews, Tom Hanks has expressed his disappointment that this film was not released to theaters because it loses picture and sound quality on the smaller screens at home. On the sound side, that is debatable because of home theater setups. But, I can agree with him on the loss of picture quality. While the 4K presentation from Apple TV+ is sharp, bright and crisp, this film almost demands to be seen on a big screen. There are naval battles where the camera pulls back far enough to see the whole convoy or to show the distance between destroyers and U-boats… The ships are so small in those scenes that it would have been a benefit to have this film projected onto a larger screen. I watched the film on a LG 55” OLED TV with Dolby Vision in 4K and it looked fantastic, but I can only imagine how much better those naval battles would have looked on a theater screen.

Greyhound is a great way to spend 90 minutes. It is a film that entertains with a singular focus and it succeeds at that. The film is ultimately forgettable because of the lack of characterization and plot. But for 90 minutes, it is thoroughly entertaining.