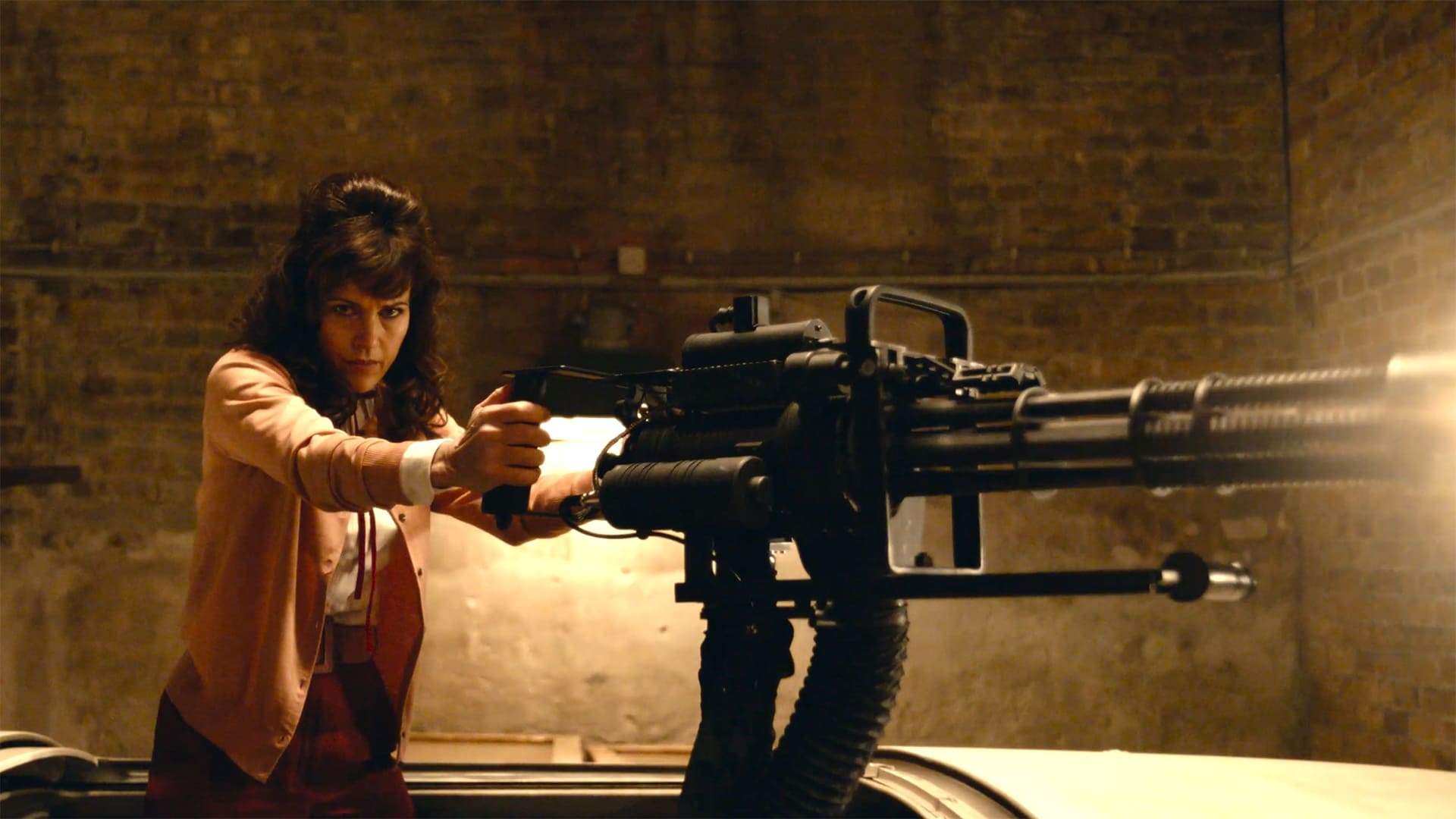 I never know what to expect from a Netflix Original film. Usually, it is mediocre direct-to-video movies that are borderline entertaining. What is Gunpowder Milkshake? Does it rise above mediocrity?

After being left by her mom at the age of 12, Sam (Karen Gillan) is raised by a crime syndicate group named The Firm. She has a handler (Paul Giamatti) that has been taking care of her since her mom left and has raised her to be a bad ass gun-for-hire, just like her mom. After Sam accidentally starts a war between two groups of Really Bad People ™, she must risk her life to protect and save a young girl (Chloe Coleman).

Sometimes the main character of a film can be unlikable, sometimes time they can be down right horrible. The character that the script gives to Gillan is one that has only a single emotion through most of the movie: Angry disinterested annoyance. When a character is disinterested, that makes me uninterested in watching a movie, and it leaves this movie feeling tiresome and not at all engaging.

The director Navot Papushado overworks the camera, strike that, he abuses the camera, the dollies, the cranes and the Stedicam operators. The camera is always moving and always in motion, even when there is nothing that warrants it to be. And it is all very distracting. It is a sign that the director does not have confidence in what is being presented – especially when it is done during action sequences and coupled with the overuse of slow motion. The action sequences in Gunpowder Milkshake lack any kinetic energy and it all feels overly rehearsed and soulless.

Gunpowder Milkshake is not like John Wick, but it does cherry pick parts of Wick to try to make its own. The general feel of the movie, the world building, the hit people are all reminiscent of Wick, but without the finesse of Wick.

Chloe Coleman (from Marry Me and Upload) is the best thing about this movie. Lena Headey is also good in the movie. Unfortunately, Angela Bassett, Michelle Yeoh and Carla Gugino are all highly underutilized.

It is funny that about halfway through the film, the director and writers basically give up trying to world build or even tell a decent story. They stop all that storytelling and lean hard on gory (boring) action.

With so many big names in front of the camera, Gunpowder Milkshake is a wasted opportunity, it is a the talent is squandered on a clichéd unoriginal script that is uninspired, boring and eventual gives up on itself. And while highly stylized in its looks, there’s no substance to back up the look. It is a completely empty experience. Gunpowder Milkshake is a less than mediocre Netflix Original Film.