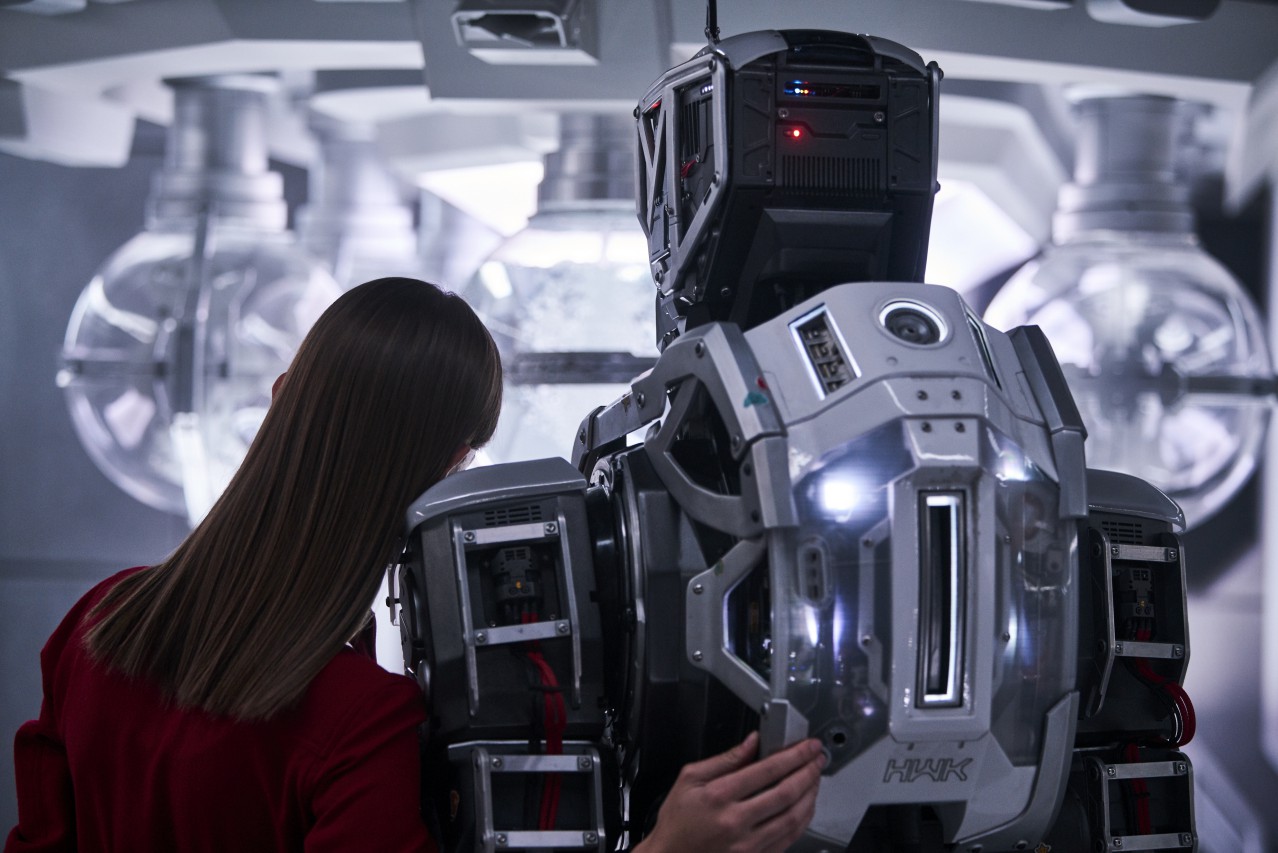 Most of this review is going to go into discussions about the movie because there is a lot to talk about. But, I will get the synopsis and recommendation written first.

In some future, humanity has been rendered extinct and the Earth is left uninhabitable – by whom or what, we don’t know. In a secured bunker a robot awakens and brings one of some 60,000 human embryos to life. The robot, Mother (played physically by Luke Hawker and voiced by Rose Byrne) raises The Daughter from birth to somewhere in her teens – we learn all this through a well done, almost Pixar-like montage. Everything is going fine until a strange human arrives at the doorsteps of the bunker, she is The Woman (Hilary Swank). We don’t know the motivations of The Woman and The Daughter (Clara Rugaard) is left to figure things out herself.

This film hinges on the performance of the main character, The Daughter because she is the one that is onscreen for most all of the film. Clara Rugaard is fantastic in the film and makes the film very engrossing. I was surprised to find out that Mother was a practical suit that was worn by Luke Hawker. The use of a human in a suit gave the film a greater sense of realism than if Mother were to have been rendered in CGI. I applaud the filmmakers for going the extra step of making Mother practical. Hilary Swank is also fantastic in the film, always leaving me to wonder if she’s lying or if she’s telling the truth.

While the film was running, I was completely absorbed. The script by Michael Lloyd Green based on the story by director Grant Sputore works very well, though I do think there may have been a little too much time spent in the front portion of the film where the relationship is built between Mother and Daughter. The arrival of Woman could have happened earlier and that would not have changed much. Though I really liked the movie while it was running, once I was done with it and thought about what happened, things began to unravel a bit. That’s what I will write about in the spoilers section.

I enjoyed I Am Mother. It is a film that is thought provoking and engrossing, I recommend the film.

The filmmakers are very clever with dropping hints about the twist throughout the film.

The biggest and slyest hint was using a timescale of days to measure time after the extinction event at the start of the film – clearly they could have used years, but intentionally chose to use days instead so that not many would notice the great difference in time and the age of The Daughter. The time that passed since the extinction event to when The Daughter was a teenager was written as 13,867 days (which is almost exaclty 38 years), but The Daughter is clearly younger than that. I had to pause the film and doublecheck the number. Another clue that stuck out was when Mother was filing away The Daughter’s test, it showed the The Daughter’s username as “APX03” which leads to “What about APX01 and APX02?”

Once The Woman arrived and The Daughter was running around the facility unmonitored – and having unmonitored conversations without Mother, I was confused to why Mother was surprisingly disconnected from the whole facility. This was all explained later when the twist happened and we find out that Mother is actually a larger AI that can move between robot bodies (a lot like Ultron) and was monitoring everything going on to begin with – as part of The Daughter’s real test.

Mother is surprisingly agile and quick. I was surprised when she woke and ran to the airlock.

The only plot hole, and it comes only after the film ends and everything is explained, remains with The Woman. The Woman’s motivation bothered me throughout the film since there really wasn’t one given. The timing of her arrival and the circumstances (her being shot) are suspect. Who really shot her since the bullet calibers were different? She obviously lied about other humans because when she eventually told her pathetic story to The Daughter about breaking away from the others means that she wasn’t shot by another human, so who shot her? Did she really shoot herself as they alluded to in the film? If she shot herself to get into the facility, why? The timing is too coincidental.

I had figured her to be the first child, APX01. But, she knew nothing about the facility, was it because Mother raised her, but only to be to a very young age? That was alluded to when Mother visits her in her cargo container at the end. So, how did Mother get her to return to the facility almost exactly 38 years later just in time to test The Daughter? If Mother was always in control of everything and driving The Woman’s destiny, why did Mother act so strangely. For instance, why fix a tracker to track The Woman back to her cargo crate – since it is hinted that Mother drove The Woman to the facility. Why did Mother want to find “the mines” when she was in control of the situation all along and clearly knew that no mines existed?

Mother is different than other robots in science-fiction films because she has faith that humanity. She believes that once reset and taught to be better, humanity can live and be better than it was before. But, this dodges the inevitable question of how will the new humanity feel about living in a world where they are watched over by robotic overlords who will (as Mother hints) wipe out humanity at any point and restart again? Will humanity resent this? The closing frames of the film show The Daughter staring at the 60,000 embryos that need to be brought to life. What was she thinking? Will she raise them to hate the AI?

It is nice to have a movie where robots’ eventual endgame is to help humanity rebuild. So while Mother did go all Skynet and destroy humanity, she/it also is helping to rebuild humanity in a better form. Though, again, will humanity be resentful of the AI for what it did and what it might do if humanity steps out of line again?