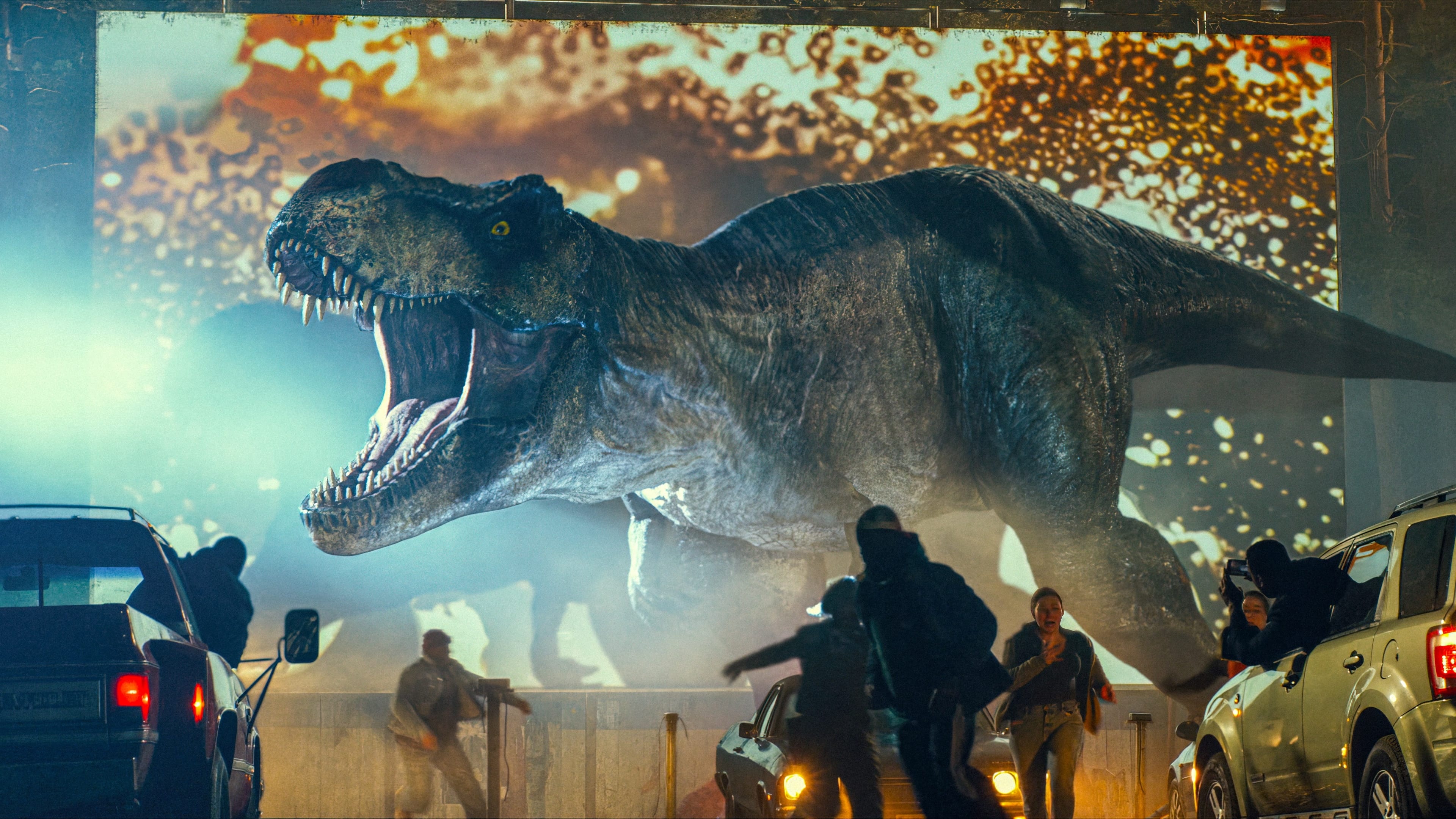 After watching Jurassic World: Fallen Kingdom: “Maybe the filmmakers behind the Jurassic World series can let the franchise go extinct at this point.“

I am glad that one more movie was made to wrap things up and to give closure to not only the Jurassic World series, but also the Jurassic Park series. The immediate draw for seeing Jurassic World Dominion was to see the OG crew back together again: Alan Grant (Sam Neill), Ellie Sattler (Laura Dern) and Ian Malcolm (Jeff Goldblum).

After the events of Fallen Kingdom, dinosaurs roam the Earth. Owen Grady (Chris Pratt) and Claire Dearing (Bryce Dallas Howard) live off the grid while taking care of Maisie Lockwood (Isabella Sermon) – the clone from the Fallen Kingdom. Giant swarms of genetically modified locusts are chewing through the world’s grain fields and endangering Earth’s ecosystem as a whole.

Ellie Sattler is called in to investigate and she believes that the locusts are a product of Biosyn (pun intended?), a company that has been tasked by the world’s governments to be the caretakers of dinosaurs. Biosyn is led by Tim Cook, well not Tim Cook, but Lewis Dodgson (Campbell Scott) who is made to look just like Tim Cook. Biosyn employees include Dodgson’s right-hand man Ramsay Cole (Mamoudou Athie), original Jurassic Park scientist Henry Wu (BD Wong) and chaotician Ian Malcolm. Sattler brings Grant along to investigate.

There is a second story involving the kidnapping of Maisie. Owen and Claire set off on a Jason Bourne-like adventure around the world to rescue Maisie. They end up in Malta on a Mission Impossible style mission that deals with a dinosaur black market and the people that run and participate in it. This story is where all the action and excitement resides – and is a welcome departure from previous films.

Lets talk about why we watch Jurassic movies: The dinosaurs look so real and so well integrated into the movie. Jurassic World Dominion is movie spectacle at its best featuring some of the best visual effects in a movie. The opening scene from millions of years ago was jaw droppingly good and I felt as if I were watching a real life dinosaur documentary. Dominion is a technical showcase for how evolved visual effects have become since the original T-Rex graced the big screen in Jurassic Park some 30 years ago.

A recurring theme of Jurassic movies is the evil corporation. It rears its head again in Dominion. The portions of the movie that deal with Dodgson and Biosyn are the weakest parts of the movie because of the repetitiveness of the evil corporation theme. It does not help that the Dodgson character was very uneven in tone and behavior. The screenwriters clearly could not figure out if he was a deadly serious character or a comical sideshow. Late in the movie, Dodgson takes his frustrations out on a chair and that one scene highlighted how badly written this bizarre character was. For a moment, I thought I was watching a different movie.

It was so fun to see the original crew back together. They have such great chemistry together and are a testament to Spielberg’s casting brilliance in Jurassic Park. I liked where the script took the Grant and Saddler relationship, that felt natural and it was something I was wanting to see happen since the first movie.

The new crew is boring. Every time Owen and Claire were onscreen, I found myself waiting for the old crew to return. Claire is only around to be chased by dinosaurs and act frightened. Pratt is only around to hold his hands up and be the dinosaur whisperer. Through all three Jurassic World movies, it seems that the only reason Owen is special is because of this trait. It doesn’t help that Pratt and Howard have zero onscreen chemistry, they could have been brother and sister and that would have been better.

DeWanda Wise is awesome as Kayla Watts, a strong willed and sassy pilot. She is the stand out star of Jurassic World Dominion. Mamoudou Athie (Underwater) is also excellent as Ramsay.

I gave Dominion an extra star for its technical prowness, but that alone can’t make up for the lackluster and disparate storyline that seemingly recycles bits and parts from other Jurassic movies. Dominion does not expand the Jurassic universe, rather it cuts and pastes from the previous five movies to create this movie.

There is a fair share of fan service in Dominion, especially with the old crew, and that this fan service worked brilliantly. There are some nice subtle callbacks to Jurassic Park. The shaving cream canister and everything related to it was a really fun bit of fan service. Ian Malcolm cluelessly giving instructions to Sattler was hilarious.

I enjoyed Jurassic World Dominion for what it was: Part fan service and part wrap up of the Jurassic series. At 2 hour and 40-minutes, the well done action sequences were welcome and made the movie move along at a quick pace. Seeing and hanging out with the original Jurassic Park crew again was well worth the price of admission. I am glad everything is wrapped up and I hope Universal leaves the Jurassic franchise alone going forth.

With every Jurassic movie there seems to be a new dinosaur introduced. This time around it was the Freddy Kruegerasaurus.