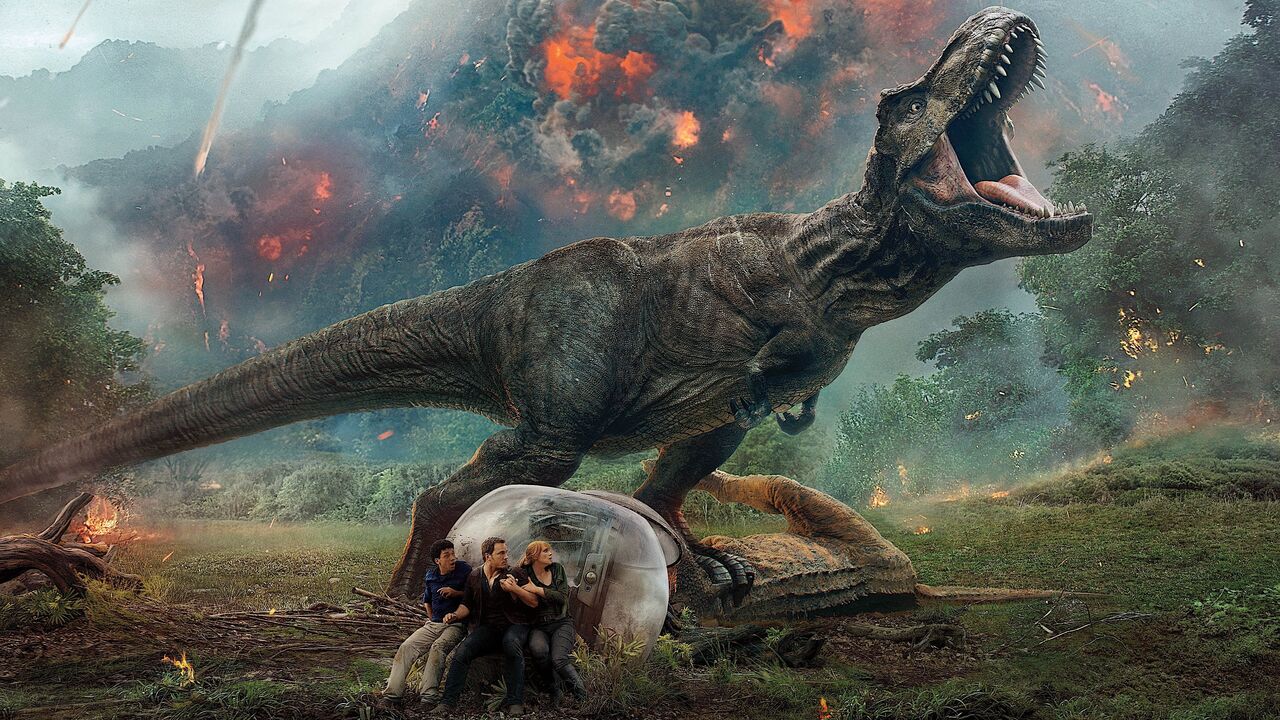 Maybe the filmmakers behind the Jurassic World series can let the franchise go extinct at this point? This movie was somewhat entertaining – with a terrific opening sequence on Isla Nublar – but gets muddled afterwards with a heavy plot about the selling of dinosaurs and also the weaponization of dinosaurs (something touched upon in the first Jurassic World film).

The special effects in Jurassic World: Fallen Kingdom are fantastic and well-worth the price of admission, it’s too bad that the film itself is rather mediocre. There are characters in the film, but they are never really developed and some only show up on screen to move the plot along – like the paleo-veterinarian and the hacker kid. Others, like Chris Pratt and Bryce Dallas Howard’s characters are merely there to run around, scream and act horrified.

Michael Giacchino steps in for John Williams to score the film and he does well – like usual.

While J.A. Bayona does a decent job with the action sequences, he is less successful with keeping the pacing of the movie. The scenes that required dialogue are a problem throughout the movie. When the action stops, the movie starts to drag along – and given the movie’s 128 minute runtime, there were quite a few moments I looked at my watch.

There are some nice visual callbacks to the original film, like the character’s awe at seeing the brontosaurus.

The aspect ratio choice for the film is perplexing. Spielberg picked 1.85:1 for his Jurassic Park films because it allowed for more height in each frame. Allowing him to give things like the long-necked brontosaurus some awe and wonder. The choice of the super wide 2.39:1 ratio really limits the use of height and that is too bad because dinosaurs are tall.

The kid being a clone was no surprise and they telegraphed that a bit too early in the film. Though, it did apparently surprise the family next to me.

There were many scenes of people being stupid. One of these scenes that stuck out was when the Ted Levine character tranquilizes the Indo-Raptor and then opens the cage to grab a tooth. Really?

Also, while they do have the DNA for the dinosaurs, I am not quite sure that the escaped dinosaurs, outside of the pterodactyls, would be much harm since it looked like the dinosaurs did not come in pairs.

There is a post-credits sequence, but it’s really not worth waiting for.

I wrote notes this time around as I watched Jurassic World: Fallen Kingdom. Here are a selection of notes from this viewing.

Giant dino-fish flying out of water to almost take down the helicopter. This is the kind of scene that I wanted to see in The Meg.

The framing of the dinosaur just can’t be done right with such a wide aspect ratio and there are parts of the scene where we only see the bottom half of the dinosaur, sans the head. It’s a disaster and removes much of the awe that we are supposed to be getting from the scene and how the characters are reacting to the dinosaur.

The aspect ratio was an unfortunate choice by J.A. Bayona.

The escape from the volcano sequence is the best sequence in the movie. I can tell that they spent a large chunk of their budget on this sequence as it looks incredible.

Why even bother trying to weaponize dinosaurs? I mean, if they have the means to genetically modify animals to respond to human commands, why not weaponize a tiger or lion or shark or whatever else is more common on Earth?

What are these rich people going to do with the dinosaurs they buy? Keep them in their backyard and hope their neighbors don’t catch on that they have dinosaurs in the backyard? Who are they going to hire to take care of dinosaurs? What if their dinosaur gets sick?

So, let me get this straight. They have genetically engineered a killer dinosaur that tracks a laser target and then attacks the target when the person holding the laser gun pushes a button.

Also, why use a dinosaur in this case? Clearly the guy with the laser targeting system has clear line of sight to the target so he could just as well shoot the target with a rifle and be done with it. One bullet is much cheaper than a multi-million dollar genetically engineered dinosaur.

Did any of the writers of the film clearly think any of this stuff through before committing it to paper?

Watched at home on DVD borrowed from the San Jose Public Library.