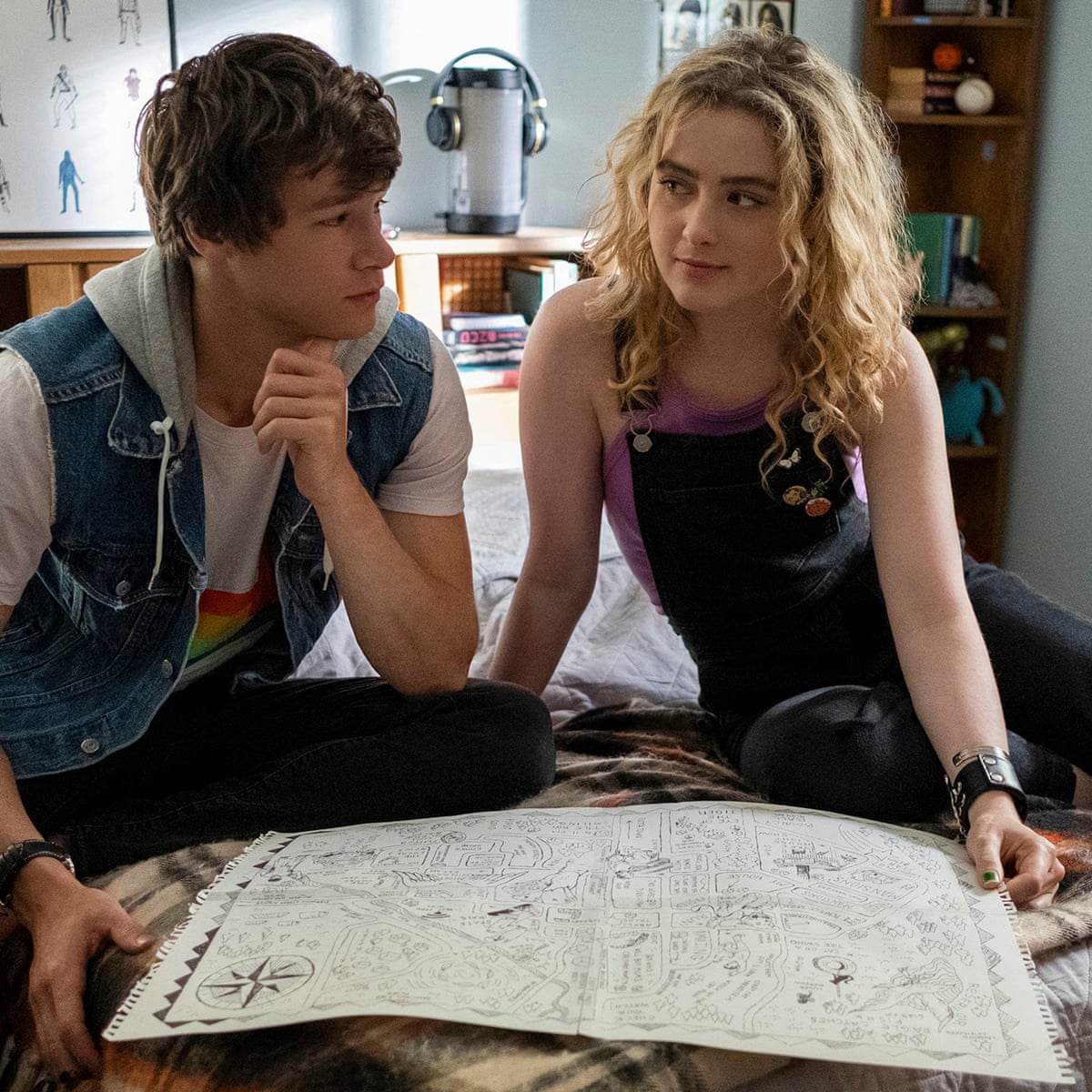 “Time is the stuff that when you spend it, you don’t get it back.“

The Map of Tiny Perfect Things opens with a well put together and impressive continuous single shot of Mark (Kyle Allen) going about his morning routine. It seems he knows when everything will happen and happily participates in a life that is seemingly scripted. We soon find out – this is no spoiler as it is in the trailer – that he is stuck in a time loop where his day repeats over and over again. In order to stave off boredon, he derives joy from the little things happening around the small town he lives in. Eventually, he finds another person stuck in the loop with him, Margaret (Kathryn Newton) and they start to hang out and keep each other company as the day loops over and over again.

Casting leads that have genuine onscreen chemistry is a difficult task – and a movie succeeds or fails based on those two actors. In The Map of Tiny Perfect Things, the two leads have excellent onscreen chemistry and both are very charismatic. Newton is perfect in her role and her emotive face lifts the film up. Allen is also great in the film and early scenes of him going about his life are very well done and work because of him – there is a key moment at a soccer game that packs extra emotional punch because of him. In the later parts of the film, Newton carries the emotional storyline and she nails it. Kudos to both Newton and Allen.

The Map of Tiny Perfect things is an example of masterful visual storytelling. The montages of “perfect things” in the film are heartwarming and shot flawlessly. The camerawork and cinematography (by Andrew Wehde) is superb – visually captivating without being distracting.

The music by Tom Bromley deserves to be mentioned as it fits the images on screen perfectly. Also, the song choices for the film are all great.

The Map of Tiny Perfect Things is a movie that starts off light and fluffy – with us taking a journey with Mark (and eventually Margaret), seeing how they innocently go about a day that never ends. I loved seeing how the positivity of Mark’s personality shows through in everything he does and how he approaches being stuck in a time loop. Margaret is a different person and it is through her that the story progresses. The middle portion of the film is sweet and seemingly magical. It isn’t until the last reel of the film that the script gets deeper with emotions and left me saying, “I’m not crying, you’re crying!” Different parts of the film are individually strong and the as a whole, the film perfectly melds these pieces together into a stronger piece of storytelling.

I came into The Map of Tiny Perfect Things thinking that it would be a lite take on the time loop trope – a young adult spin of Palm Springs. But, when the credits started to roll, I was surprised at how much I liked this film and how different it is when compared to other time loop films (Palm Springs, Edge of Tomorrow, Groundhog Day). I highly recommend The Map of Tiny Perfect Things.

I really loved the twist in the film where Mark (and us) come to the realization that the story is not centered around Mark. Rather, it is centered around Margaret and what she is going through with her dying mother. The twist was hinted at throughout the film and when it arrived, I did not feel cheated because it was earned. It was done right and done in a way to give an emotional punch.

I would be remiss not to compare this film to Palm Springs. On the surface the two films are similar: Boy and girl are stuck in a time loop, boy and girl fall in love, boy and girl break up, girl finds way out of time loop and they live happily ever after. There are some key differences to the two films. First, the male characters in both films are opposites. Nyles in Palm Springs did not want to leave the loop, Mark does want to leave. The female characters are also opposites. Sarah wants to leave, Margaret does not. The big difference is that Nyles did not really have a reason to want to stay in the loop outside of the fact that he’s become complacent and has accepted the fact that he’s stuck. Margaret has a reason for wanting to stay in the loop (that she created herself) and that is to spend more time with her dying mother. That emotional hook made a big difference for The Map of Tiny Perfect Things. Even though I rated both Palm Springs and the Map of Tiny Perfect Things 10 out of 10, I like The Map of Tiny Perfect Things more than Palm Springs because of the emotional hook provided by Margaret’s story.

The science in the film is pretty thin and it is there only to drive the story. I did not mind that very much because the film never takes the science too seriously and never makes a big deal about it. Terms like “time anomaly” and “singularity” are said a few times, it works to get us in the mindset for the film and then they move on – and so did I.