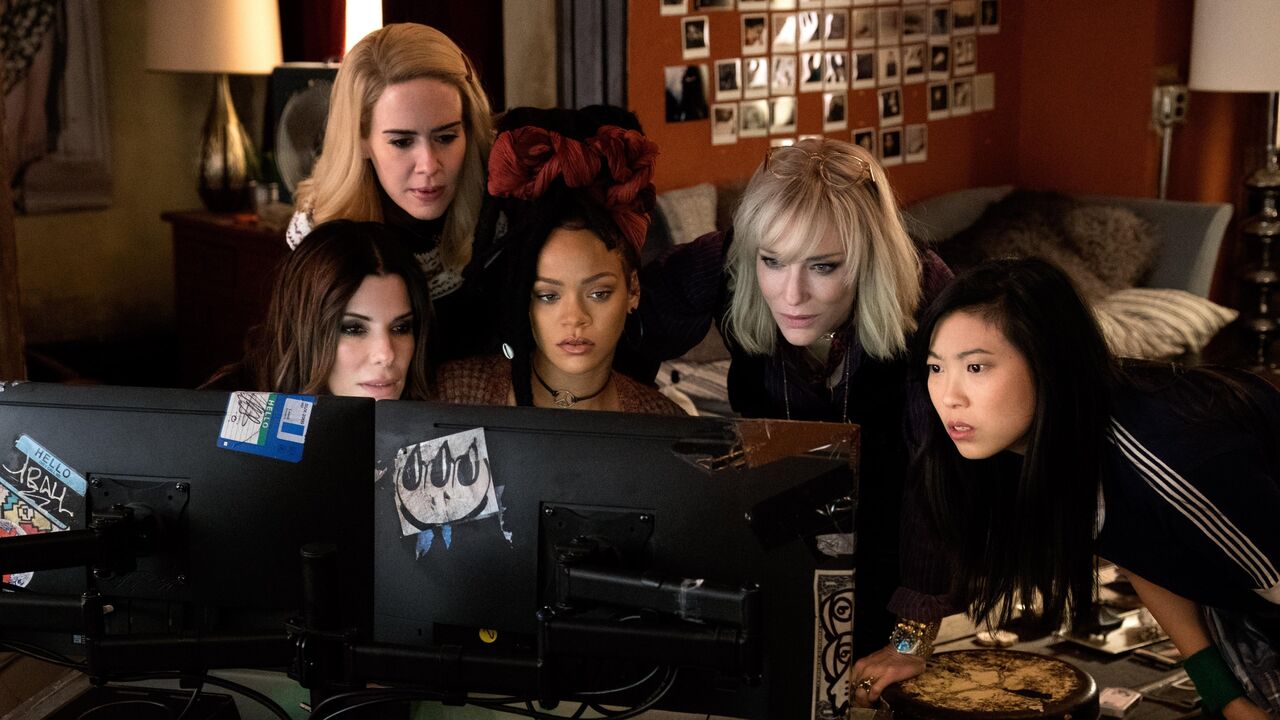 Debbie Ocean (Sandra Bullock), younger sister of Danny Ocean (George Clooney) from the previous three Ocean’s films, has been released from prison. Once out, she seeks the help of her partner-in-crime Lou (Cate Blanchett). During Debbie’s stay in prison, she had a lot of time to plan the ultimate heist of the Cartier necklace named The Toussaint which is worth more than $150 million. With Ocean as the mastermind, Lou as the procurement specialist, the rest of the team gathered include: Jewelrey specialist Amita (Mindy Kaling), fashion designer Rose Weil (Helena Bonham Carter), Hacker Nine Ball (Rihanna), pick pocket Constance (Awkwafina) and fence Tammy (Sarah Paulson). What is great about the characters is that they are all very well-developed and unique.

The big star of the film is not Sandra Bullock nor is it Cate Blanchett – no, the star of the film is Anne Hathaway who steals the show the minute she shows up on screen. Her character, Daphne Kluger is vein, egotistical, self-center and so focused on herself that she tends to not see what is happening around her. The character Kluger is absolutely hilarious and Hathaway embraces all of the flaws of the character and it is because of Hathaway that Kluger is the best thing in Ocean’s Eight.

That’s not to say that Bullock and Blanchett are bad, they are excellent in the film also. The supporting cast is good and James Corden’s extended cameo in the film was icing on the cake. There are also so many other wonderful cameos throughout the film.

Daniel Pemberton’s score for the film needs to be called out. The film would be a much lesser film without Pemberton’s score which adds a layer of cool onto of a movie that already is very cool. The score works perfectly with the imagery on screen, but it is surprisingly very listenable by itself also – it is one of my favorite movie scores.

Ocean’s Eight is super entertaining, well-made and polished. Ocean’s Eight is incessantly funny with many laugh out loud moments throughout the film. There are many small touches throughout the film which reflect the high level of craftsmanship from the filmmakers – one of my favorites is the music fading when the camera goes underwater to track a dish. The cast is impeccable; the music is spot on; and the editing and camerawork does a good job of mimicking the original film. Ocean’s Eight is well worth a watch (or two), this movie leaves me with a smile on my face every time I see it.

I originally screened Ocean’s Eight at the Oarkridge Century 20 and have since watched it multiple times on streaming and on 4K UHD Blu-ray. The picture quality of the 4K UHD Blu-ray is stunning and if you still love physical media, 4K UHD Blu-ray is the way to see this movie.

The callbacks to George Clooney’s character were good for those of us who have seen the previous films. I am wondering if the character is really dead since they have left such leeway for him to return.