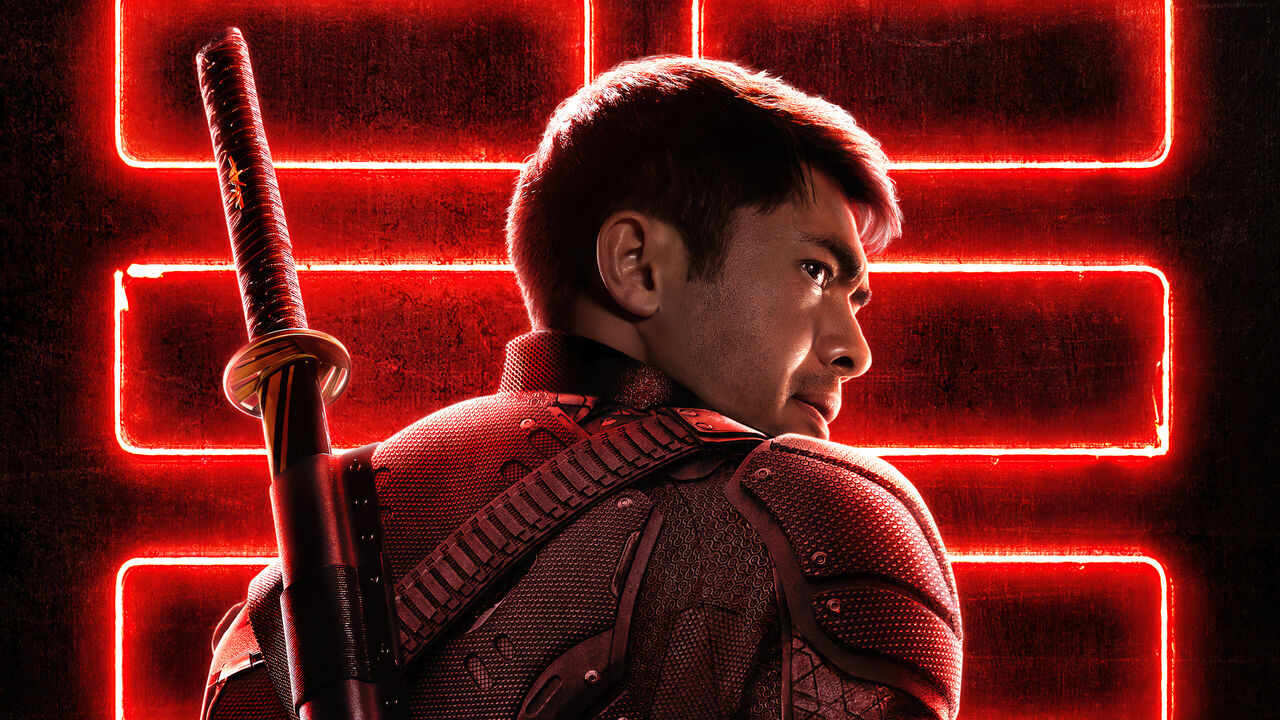 As Snake Eyes opens some twenty years ago, young Snake Eyes witnesses the murder of his father by a strange man with dice. Snake Eyes escapes with his life, but as we return to the present, we see that his life is all consumed by rage and the need for revenge.

When a mysterious man named Kenta (Takehiro Hira) offers answers to Snake Eyes about who murdered his father and where to find this murderer, Snake Eyes (Henry Golding) reluctantly takes up the job offer by Kenta. It is on the job that Snake Eyes meets Tommy (Andrew Koji) whom he ends up forming a strong brotherhood bond with. Tommy eventually brings Snake Eyes home to the castle of his clan, the Arashikage. Along the way we meet the Arashikage’s head of security, Akiko (Haruka Abe) who questions the arrival of Snake Eyes and his motives.

While I enjoyed the origin story of Snake Eyes (and Storm Shadow), the pacing of this movie was slow in too many places. There was a certain lack of energy about the movie, even in some of the action sequences. And speaking of action sequences, I wish they had more action in the film. The action scenes that were in the movie also are mediocre at best – director Robert Schwentke (RED, Allegiant) chooses to use quick cuts and shaky-cam to try to infuse excitement into the action scenes. As usual with movies that use shaky-cam and quick cuts, this technique does not work and left me half confused at times to who was fighting who – or even what was going on.

The movie is grounded in reality for the first half, but strangely the second half delves into mysticism and that almost derails the whole movie. The introduction of mysticism was a bit jarring, I would really love to see what this movie could have been had it been completely ground in reality from start to finish.

Having said that there are redeeming qualities to the movie. The first is just one word: Ninjas. Lots and lots of ninjas. Kid Mookie was quite happy to see ninjas because ninjas are frankly very cool. The plot and character motivations are complex and intricate, I liked that. I also liked that the script by Evan Spiliotopoulos, Joe Shrapnel and Anna Waterhouse shows Snake Eyes to not be perfect. He is a flawed person that has made mistakes throughout his life which has led him to become who he is now.

Henry Golding brings a sense of gravitas to the role of Snake Eyes. And much like Batman, actors seem to be great at one persona or the other, but usually never both. Michael Keaton was great as Bruce Wayne, but not too much as Batman. Christian Bale was great as Batman, but not so much as Bruce Wayne. Here, Golding is great as the normal human Snake Eyes, but not so much as the warrior Snake Eyes. I could never buy into the idea of Golding being the warrior persona, he doesn’t have the physicality for it, nor does his fighting seem genuine onscreen – most of the time, when fighting or striking a fighting pose, Golding looked like an actor who got a crash course on what a martial artist would look like, but he never looked like a martial artist.

Andrew Koji is great as Tommy. He brings a real sense of inner and outer rage to the part. Koji, unlike Golding, does seem genuine with his action scenes (because he has studied martial arts) and he is great in all his action scenes. Haruka Abe is quite expressive in the movie and this is beneficial to the movie as her character serves as the logic and compassion of the movie. I was quite disappointed at how the movie wasted the talents of Iko Uwais. I expected a lot more martial arts from him, but the script never gave him any opportunities to show off his talents.

Snake Eyes serves as both a spin-off for the Snake Eyes character and a reboot for the G.I. Joe series. It lays the foundation for both a sequel for Snake Eyes and a possible new G.I. Joe film with rebooted central characters (like the newly introduced Baroness and Scarlett). But, given how badly the film did in the theaters – and possibly not to its own fault, but because of the timing of its release that coincided with an uptick in COVID-19 cases – there may not be any follow up films in the future. I do hope that at least a sequel is made to this movie to further explore the Snake Eyes and Storm Shadow relationship and story.

Snake Eyes the movie is mediocre. I wished there was more to the film. But, it was an entertaining film and I softly recommend it, especially for those, who like me, grew up with G.I. Joe cartoons and found the character of Snake Eyes to be the coolest of them all.

The use of electric motorcycles throughout the film was rather cool. I liked the idea that maybe the Arashikage is forward looking when it comes to their environmental impact.

While I understand the business need to make this film a PG-13 film to get to the target audience of younger boys and teenagers, I am curious what this film could have been like had the filmmakers chosen to make it an R-rated film.

Maybe it is just me, but Golding looked a bit like a young Chow Yun Fat in some parts of this movie.

A bad-ass ninja fighting grandma for the win!

Snake Eyes is a martial arts film at its heart.