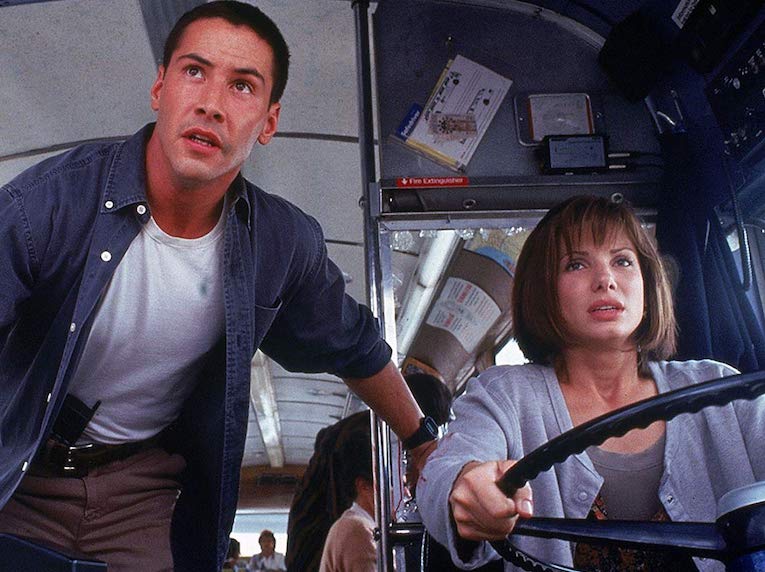 That’s it, that’s the plot of this movie. As simplistic as it seems, it works and works with aplomb. The movie Speed is sheer simplicity, a determined force of pure action.

Simplicity is Speed’s greatest strength, from the opening elevator sequence to the bus sequence to the train sequence, Speed gets started and never lets up. While there are plot holes throughout the film (a bus flying and landing like a 747?), none of that matters while the movie is running. Writer Graham Yost and director Jan de Bont never give us enough time to think, they keep the action going and keep the thrills thrilling. The greatest achievement of this film is that it gives us wall-to-wall action without ever making us numb.

Keanu Reeves had shown three years before Speed that he could be an action hero in Point Blank. He does well in this role, he’s even able to emote a bit more – like after a bomb kills someone close to him. Sandra Bullock does a good “girl next door” for Speed. The two are supposed to develop a love interest, but I never found them to have enough screen chemistry to sell that. Dennis Hopper is awesome as Howard Payne, the nemesis to Keanu Reeves’ Jack Traven. He is absolutely maniacal and he really sells the “crazy, but not stupid” aspect of the character.

I saw Speed in the theaters when it was released and have since seen it countless times in the following 26 years. I’ve seen in on LaserDisc, VHS, DVD, Blu-ray and streaming. This is a movie that never gets old.

Jan De Bont certainly peaked early as a director. I could easily argue that Speed, his directorial debut was his peak. He followed Speed with the memorable film Twister, but Twister never reaches the heights as Speed. From there it was downhill with Speed 2: Cruise Control, The Haunting and finally ending with Lara Croft Tomb Raider: The Cradle of Life. I will always remember him for his work directing Speed and being the cinematographer of Die Hard and The Hunt for Red October.

Graham Yost seemed to have peaked early as a writer with Speed also. None of his follow up films have come close to Speed. Those include Speed 2: Cruise Control, Hard Rain (oh my, if you haven’t seen this one, save your time) and Mission to Mars.

Mark Mancina’s score for Speed, especially the main theme, is an ear-worm. It’s a brilliant score that is reflective of scores from that time and oh so memorable.

It has been 26 years, if you haven’t seen Speed, you need to. This is one of the best and purest action movies ever made.