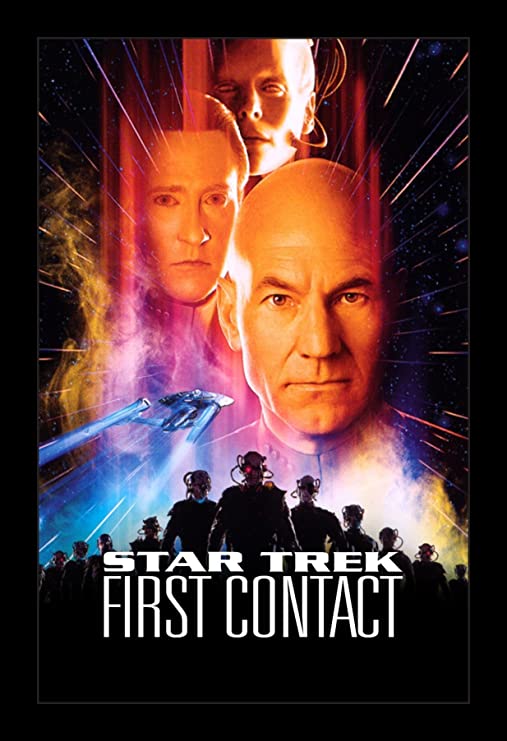 Star Trek: First Contact is one of my favorite Star Trek films – and definitely my favorite of the TNG films. What makes this film special is that it is made to be accessible to even non-Star Trek fans. Yes, with more context around the Star Trek franchise comes more enjoyment of the film, but when I first watched the film during its release in theaters, I did not know much about TNG since I had only caught episodes here and there – and now, watching it 24 years later, I still have not watched many episodes of TNG. Though, I have watched Enterprise, The Original Series, Voyager and Discovery.

First Contact opens with a budget-breaking space battle between the Federation and The Borg. The Borg are trying to assimilate Earth. The new Enterprise E is left out of the fight because of Jean-Luc Picard’s (Patrick Stewart) previous incident with being assimilated into The Borg Collective. As the fight continues, the Enterprise E returns to Earth and joins the battle. The Borg nearing a loss, tries one last ditch scheme and travels back in time to try to assimilate Earth at an earlier time when there is less resistance. The Enterprise E and its crew follow The Borg back in time to try to save Earth. On Earth, they meet Dr. Zefram Cochrane (James Cromwell) the creator of Warp technology. They also meet Lily Sloane (Alfre Woodard) who works with Cochrane on their Warp capable ship, the Phoenix. The Borg Queen (Alice Krige) also appears.

The script for the film is well-written and splits the story into two. The first is dealing with Cochrane and his first Warp flight. The second is battling The Borg. I was surprised by and enjoyed the humor in the script that kept the movie fun to watch and very engaging. Things like Drunk Troi and the cynical Cochrane are very well done and fit into the film perfectly.

I really liked how the film explores the Cochrane character both on how he views himself and how the people from the future view him. The future people see him as an almost infallible genius hero, but he turns out to be nothing but a cynical drunk who creates Warp technology for monetary benefits. It is great to see this idea explored of how history can inflate or elevate the stature of an individual – but, being Star Trek, there is hope and Cochrane turns out to be a great guy as soon as he realizes what his creation can be used for. James Cromwell is perfect in the role of Cochrane. It is said that Tom Hanks almost played Cochrane, which would have been interesting – but I do like Cromwell a lot as Cochrane.

Jonathan Frakes loves Star Trek and it shows with his direction of this film. It is top notch. And he is also fun to watch as Riker in the film. The scene he has with Marina Sirtis as Drunk Troi showed him having genuine fun onscreen.

Of the whole cast, those that get screen time opposite Stewart are the strongest. Alfre Woodard’s strong performance rivals Stewart’s performance and gives him a run for his money. The Ahab scene between Lily and Picard is one of the most memorable of the film. Another memorable scene is the split scenes between Picard and Worf – where Picard ends up (wrongly) calling Worf a coward and later takes it back. Michael Dorn is great in that scene – along with other scenes that he is in. Alice Krige is intriguing as The Borg Queen, she gives the queen sensuality.

The first time I saw the film and even in subsequent screenings, there were things that I did not catch. This time around since I have been watching Star Trek: Voyager I noticed that the sick bay in First Contact is the sick bay set from Voyager, but redressed to make it look different. I also enjoyed the cameos from Robert Picardo (as the EMH) and Ethan Phillips (Neelix in Voyager as a holographic mâitre d’ in the Holodeck in First Contact). Also, I wasn’t quick enough to see it while the movie was running, but the cameo of The Millennium Falcon was cool also.

The Jerry Goldsmith score for the film is spot on. Though, I can tell in his later score for Air Force One he takes some of the First Contact themes and recycles them.

Star Trek: First Contact is one of the best Star Trek films. It is made so that anyone can watch it and still be entertained, even without knowledge of anything Star Trek. I highly recommend this film.