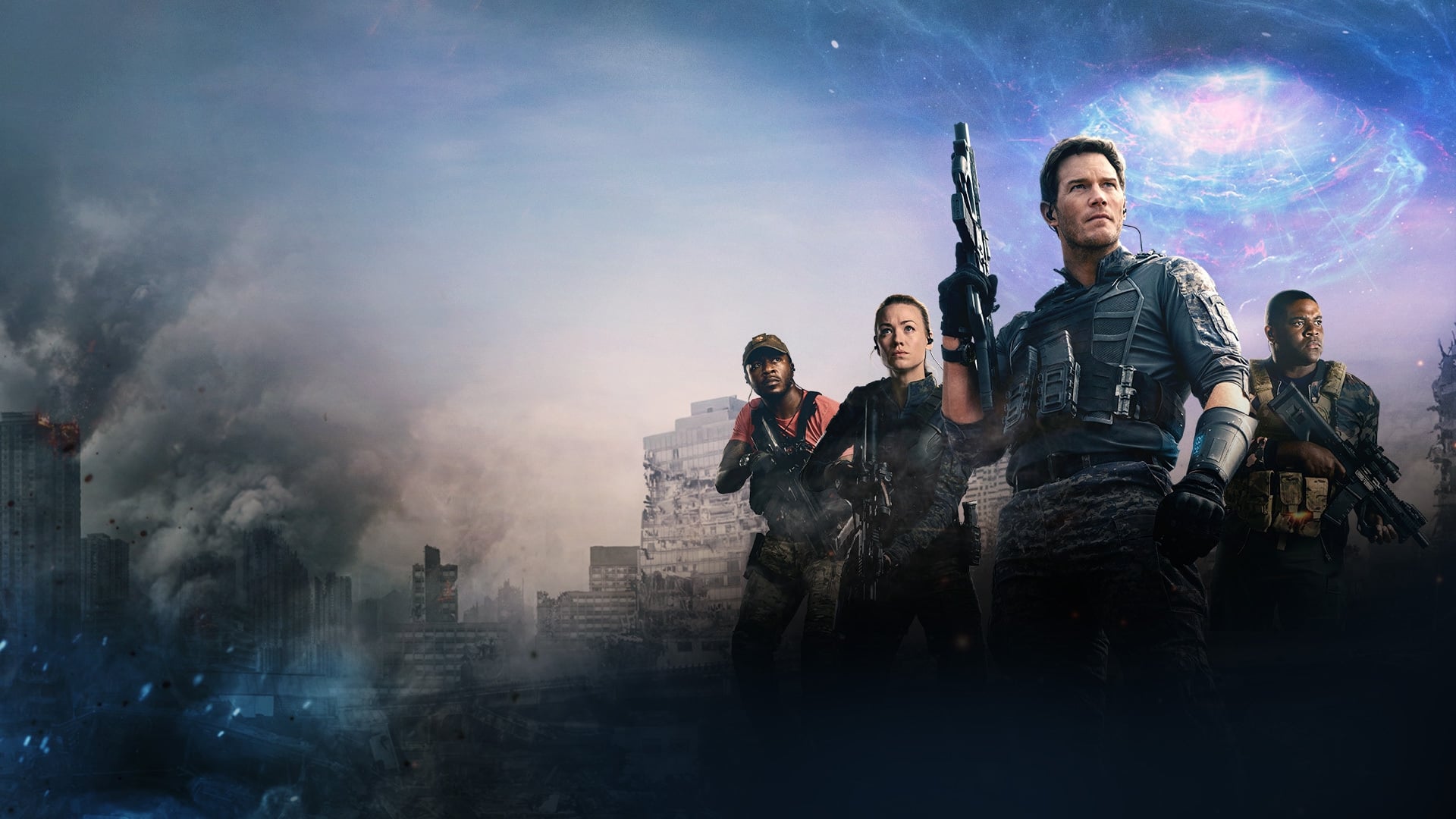 I had a hell of a time slogging through The Tomorrow War.

While sitting down to watch a soccer game with his wife, Emma (Betty Gilpin), daughter, Muri (Ryan Kiera Armstrong) and a house full of party guests, Dan Forester (Chris Pratt) witnesses on the TV people from 28 years in the future traveling back in time to ask for help.

In the future, an alien species named the White Spikes (sounds like a terrible rock band) have come out of nowhere and killed most of Earth’s population. They are a ruthless species and the people in the future are facing their last stand. They need more people from the past to travel to the future in order to help fight the unfightable war.

There are leaps of logic or even lack of logic that I can overlook about movies, especially entertaining ones. But this was too great of a lack of logic for me to overlook.

The Tomorrow War might be a film that was made on a $200 million dollar budget, but it strangely looks and feels like a made-for-TV movie – and at some points, it feels quite shlocky. There’s quite a few scenes with questionable use of slow motion. The general look of the film is drab and the imagery is quite desaturated. I was surprised to see that the cinematographer on the film was the usually reliable Larry Fong. One short sequence was really cool though, it happens early on in the film when director Chris McKay puts the camera inside of some fighter jets as they are doing maneuvers. That was rather awesome.

The movie does have some flash and shine, but there’s little in the way of art in this movie. The movie feels like it was shot without attention to detail or without any artistic flair – director Chris McKay is no David Fincher or Ridley Scott. The lack of attention to detail is evident in quite a few scenes where the editing and cuts are jarring and characters are out of sync with the previous cut.

Chris Pratt is best known for his one-liners, quips and general comedic timing. The Tomorrow War asks him to tune that side of his acting down and adopt a more serious style. He is miscast in his role as Dan Forester (one “R” Forester) and has hit the limits of his acting abilities – a furrowed brown is not the answer to all emotions, Mr. Pratt. He would have been much better in the comedic relief role that was given to Sam Richardson.

Yvonne Strahovski does not do any better in the film. A scene between her and Pratt on the beach was supposed to be a heavy emotional scene, but it was cringeworthy and lacked the right emotion. Mary Lynn Rajskub and Mike Mitchell seemed to have walked onto The Tomorrow War set thinking they were in a different film. Every time they were onscreen (which thankfully was not too much) dragged me out of the movie.

This is all unfortunate because some of the supporting cast is actually really great in the film including Betty Gilpin, Ryan Kiera Armstrong and of course J.K. Simmons who is always great.

The script by Zach Dean is full of lines that were supposed to strike up bravado, but fall completely flat – and in some cases made me laugh out loud, like the line “The world doesn’t end on a schedule!” Outside of the lack of logic, the script is full of daddy issues.

There is a sequence late in the film that employs the science montage with the customary screen staring by characters as important science happens.

One good thing about The Tomorrow War is the score by Lorne Balfe. It has some memorable themes and works well with the imagery presented on screen.

Unfortunately, The Tomorrow War fails right as it gets out of the gate with its premise. It tries hard in the last part of the film to rectify some of the failures, but by then it is too late. I do not recommend The Tomorrow War, even if there’s nothing else to watch. 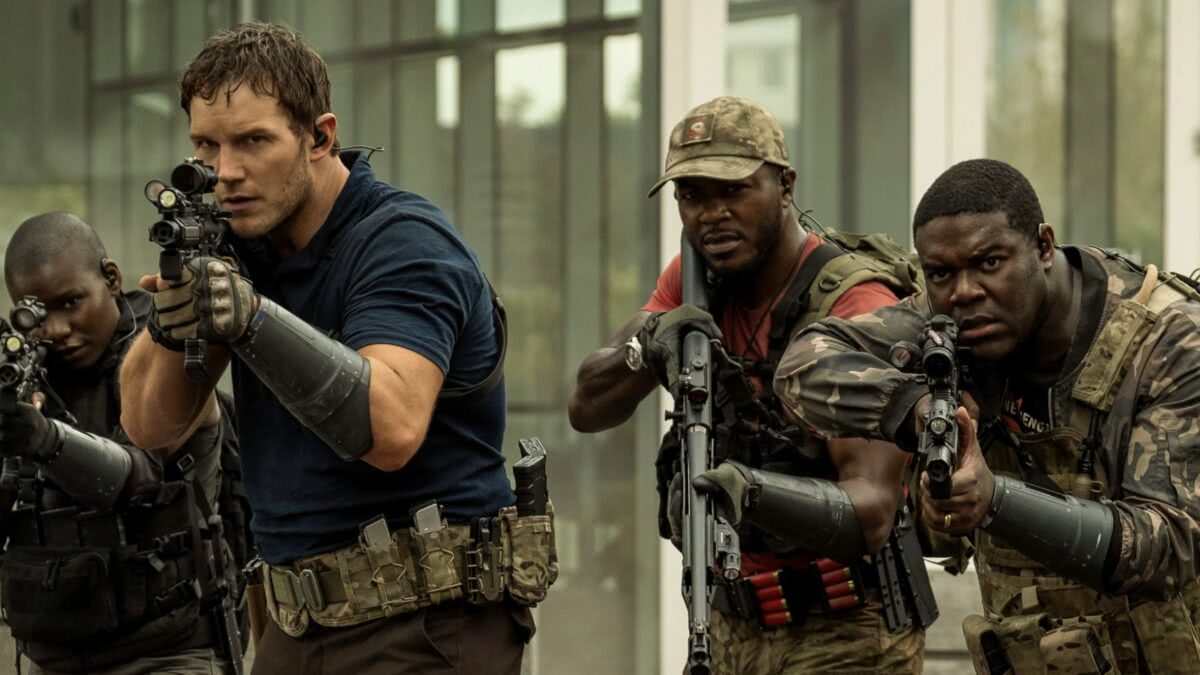 The twist that Romeo Command (Yvonne Strahovski) is actually Dan’s daughter in the future was a nice reverse John Connor twist.

While in the future, Dan makes a big deal about leaving Muri to die if he takes toxin back to mass produce. Dan goes as far as vowing to bring the toxin back for mass production and then coming back to the future to “save” Muri. But really, that is not how it happens Dan. C’mon Dan, are you the only human on Earth that hasn’t seen Back to the Future? This last section of film in the future was infuriating. Not only did characters tell him where and when the aliens were first spotted, he also has the toxin to kill them all. Go home Dan, stop the invasion from the past so that the Muri of the future doesn’t have to suffer.

That was a really long seven minutes at the end in the future.

When Dan returns to the past, he gathers a rag tag group of people to go to Russia to find the aliens in an ice pack. They go there with a bunch of toxin, but also with enough C4 to vaporize a giant portion of the ice pack in order to find the aliens. When they go into the newly discovered ship, they don’t take inventory of how many aliens there are in stasis. They just go and try to inject aliens with the toxin – not knowing if there is enough. But, eventually the aliens awaken and the team needs to use another stash of C4 to vaporize the spaceship and rid the world of the aliens. This lack of logic was also infuriating. They came with C4 to blow up the place, why even bother with the injections? Plant the C4, vaporize the aliens.

What happens to the young people who were sent to the past once the alien ship was destroyed? Would they not disappear since their future just changed?