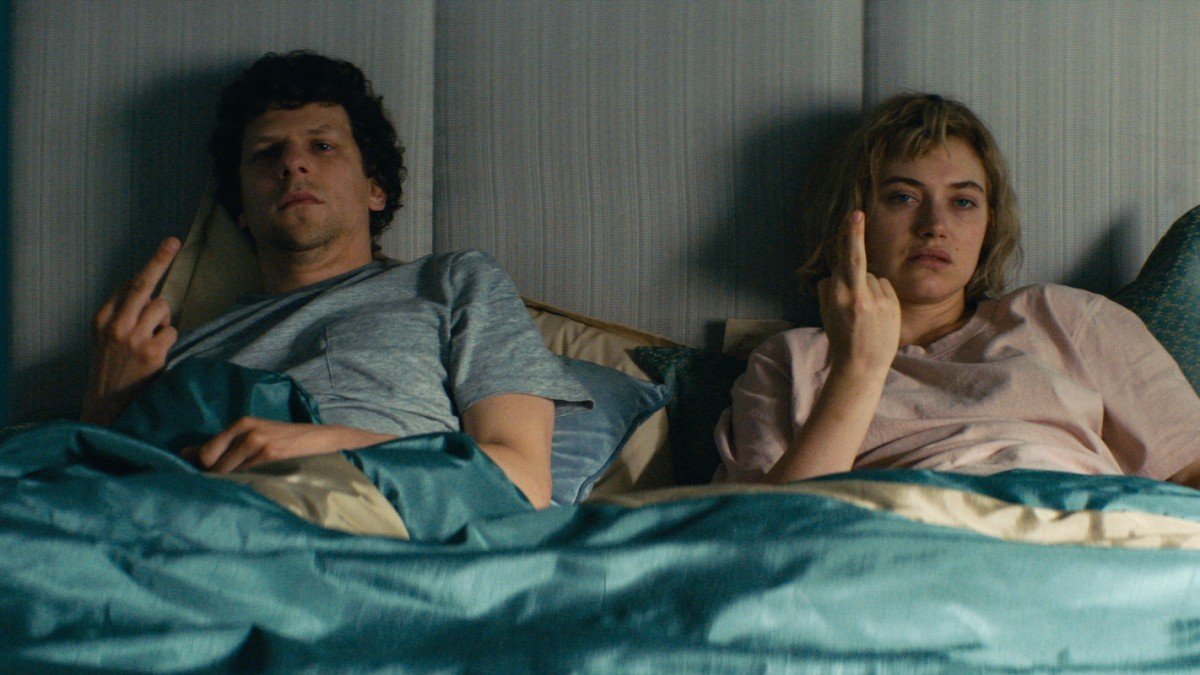 A young couple, Gemma (Imogen Poots) and Tom (Jesse Eisenberg) walk into a real estate office to look at houses because the market is so hot and they don’t want to miss out. They are pressured by the creepy salesman, Martin (Jonathan Aris) to visit a pre-fab neighborhood named Yonder. Upon arriving, they are taken to look at house #9 in a maze of a neighborhood where all the streets and houses look the same. They are stranded there by Martin and are unable to find themselves out of the neighborhood. One night, a baby arrives and the couple is promised that they would be released once they raise the baby to adulthood.

Imogen Poots is fantastic in this film, she is given material to show her range of acting. But, she is more fun to watch in the less faux-intellectual film Need for Speed. Jesse Eisenberg is fine in the film. Kudos to Jonathan Aris for being uber-creepy and unsettling as Martin. Also kudos to Senan Jennings as Young Boy and Eanna Hardwick as Older Boy. Both are suitably creepy in their parts also.

The film itself is gorgeously shot and each frame of the film is meticulously created to be unnerving. It all starts with the unexplained footage of birds that opens the film. The colors of the film also seem to be specific to feelings – most especially the green house in Yonder where green represents the color of nature, life and renewal. In the visuals department, Vivarium is very thoughtful.

The idea behind Vivarium has so much potential. The actors in Vivarium are top notch and give the movie a weight. The visuals of the film are luscious. Even the sparse sound design of the film brings an unnatural sense of dread. But, the parts don’t come together to made a great or even good film.

The story for the film is confounding and confusing. This is not a spoiler, but if you are going to tackle this film, pay attention to the opening footage of the birds and pay attention to Gemma when she explains to the little girl in the schoolyard about the cuckoo birds. If you don’t know (I didn’t), the cuckoos in the opening footage are of the brood parasitic species of the bird. Knowing this ahead of time will help with the film in general, but not by much.

I don’t know if the writers (Lorcan Finnegan and Garret Shanley) were trying to be intellectual and high minded about the story, but it did not work. The portion of the film that happens between when the boy arrives to near the end (around the time of the twist) is overly long, overly ponderous for no good reason and builds up to nothing. There is no pay off for the middle 50 odd minutes of the movie. I was bored to death in this section of the film. This might have been better as a short film, but as a 99-minute film, it is overly long on running time and majorly scrawny on substance. The film seems to want to be a sci-fi/horror parable about the trappings of suburban life, marriage and child rearing. But, it never succeeds at that.

Vivarium is desolate, bleak and no fun to watch. I felt just as trapped as Gemma and Tom felt – and I am here to tell you to save yourself and don’t visit Yonder.

The initial footage of the brood parasitism cuckoo might have worked had I known about the cuckoos – I had to look it up after the movie ended. I had no idea about how that worked and Gemma’s brief explanation in the film wasn’t enough to lay the groundwork for what is the backbone of the film.

The film does the audience a disservice by not explaining much about the Martin-species. Yes, sometimes, like with the Xenomorph of Alien, it’s better to know nothing about an alien species. But, here in Vivarium, it would have been nice to get some more information.

Who did Tom find at the bottom of the hole?

Why would the Young Boy bring home the book for Gemma to see and look at?