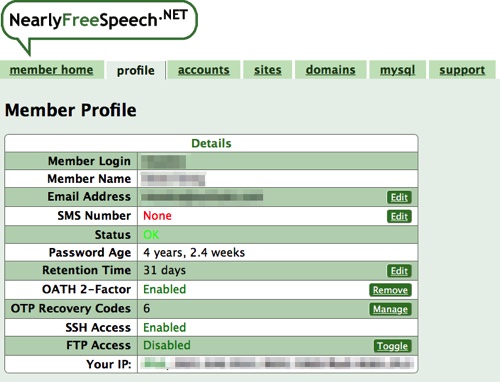 Four years and 2.4 weeks ago, I moved ultramookie.com and hellomookie.com over to Nearly Free Speech. I had become too busy to manage a web server and found NFS incredibly cheap to host my site.

At the time, ultramookie.com was running on my own blog engine and was generated dynamically. I quickly dumped all that content into static html files and made a quick and dirty archive of it all. Then, I wrote up a Python script to convert markdown files into static webpages and build a website from all of it. I did this because it would make moving my site to different hosting providers easier. Also, it was super cheap to host the static sites on NFS instead of paying for dynamic content and a mysql database. The cost was around a dollar per month to host all my sites at NFS. It was completely no frills and it worked great.

When I logged in last night to add a site to my account, I noticed that NFS had changed their pricing structure. While I understand why they did it and it continues to be a very inexpensive option for hosting sites, the increase in pricing made the difference between running a simple nginx static webserver and hosting on NFS very slim. The price increase would make hosting multiple sites there as expensive as running my own nginx server. Plus, running my own server would let me do stuff in the background that I couldn’t with NFS. Because I had converted my site to static html and continued to grow it that way, moving the site would be easy.

Yes, it means that I have to admininster a server, but I have time now and running a vanilla nginx server that only serves static content is not that big of a deal.

I still think that if you have a static site to host, don’t want to admininster your own server and want reliability at a low price… Then Nearly Free Speech is a great place to go. For me, I am moving so that I can get a little more out of my dollars.