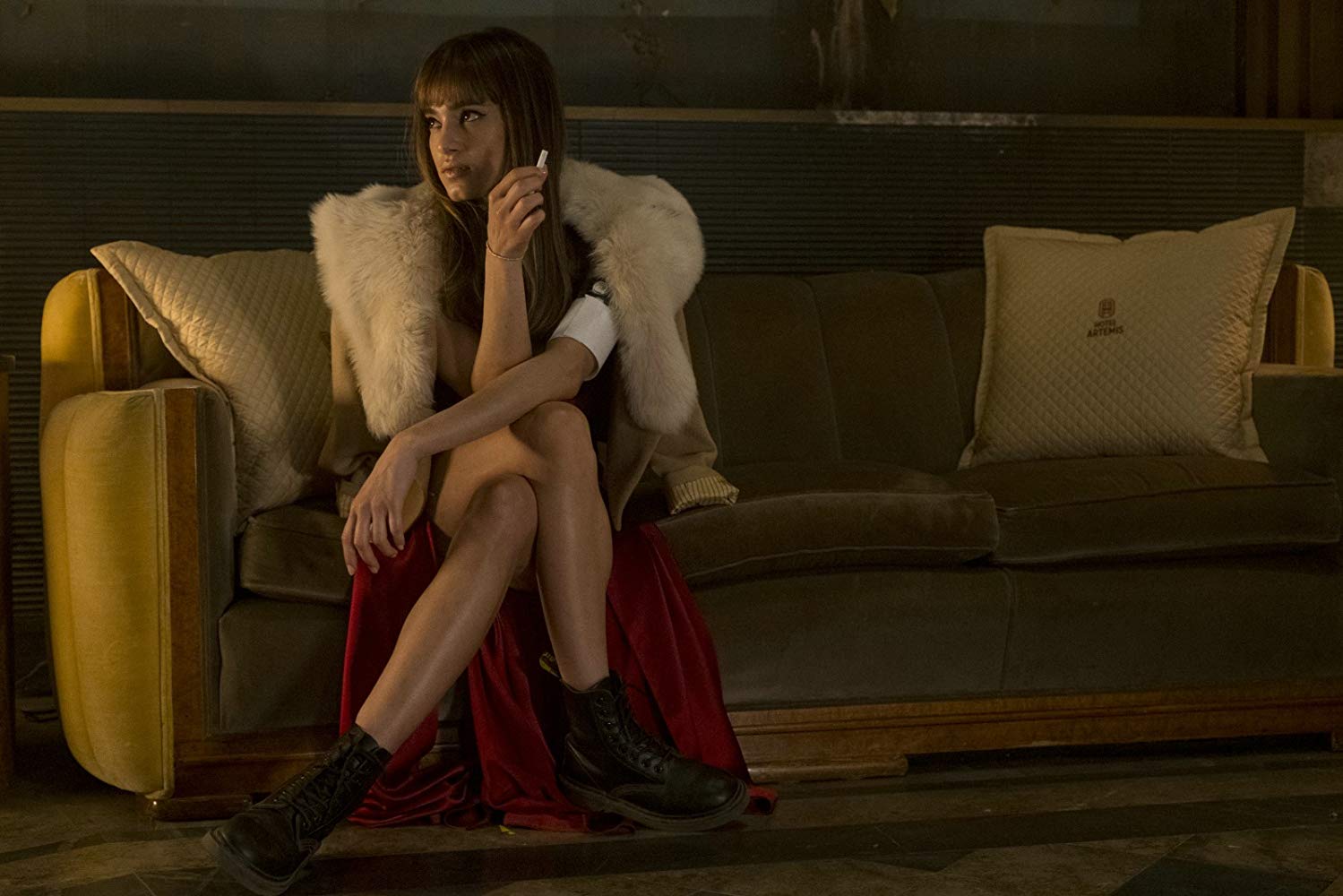 It is hard for me to review Hotel Artemis. The parts that make up the movie are really great, but the parts don’t fit well together as a 94-minute movie. There is so much potential with Hotel Artemis.

The year is 2028 and LA is a city under marshal law. A riot has broken out because of issues with water. In the midst of this situation we join a bank robbery led by Sherman (Sterling K. Brown). During the robbery, part of his crew is killed and Sherman’s brother Lev (Brian Tyree Henry) is injured. They head over to the Hotel Artemis which is a private hospital for criminals (with a paid membership, of course) that is staffed by “The Nurse” (Jodie Foster) and Everest (Dave Bautista).

Hotel Artemis is a place with rules which are a lot like the rules of The Continental in John Wick. Clients are given names based on the room they are assigned. It is here that Sherman (now known as Waikiki) reunites with Nice (Sofia Boutella) who is a woman with a particular set of skills. He also meets Acapulco (Charlie Day) who is an obnoxious rich guy.

The characters in Hotel Artemis are completely two dimensional and none of them, even the main character Sherman, are given much of a character arc. I could not figure out why the character Acapulco even existed in the film as that character does nothing except for being a plot device to drive two plot points in the movie. These are not human characters, rather they are talking plot devices.

Having said this about the characters though, each and everyone of them is distinct and interesting. Foster is particularly good as the nervous and twitchy Nurse, it is her performance that elevates this film. Bautista is great in his role and I love his recurring line about his name tag. Charlie Day is an absolute blast to watch as Acapulco, even if the character isn’t key to the movie. Zachary Quinto does show up in the movie as the approval seeking son of The Wolf King (Jeff Goldblum), but he did not fit the role. I wanted to see more of Jeff Goldblum as The Wolf King, I think it was a missed opportunity by giving him so little screen time.

The visuals of the film are gorgeous. The Artemis is a dichotomy of old and futuristic. It at once feels nostalgic with its decor and modern with its medical equipment. Each character has their own distinct look – the flowing red dress that Boutella wears is very memorable – especially when she starts to fight. The imagery that is created to show the riots throughout the city is stunning and disturbingly realistic.

I was expecting an action film, but what I got was a weak character film. There is action in the film and when it does happen, it is quick, impactful and brutal. Boutella is ferocious when she tears through a dozen bad guys.

So, the different parts of Hotel Artemis (memorable characters, interesting setting, gorgeous visuals and brutal action) are all great by themselves. But writer/director Drew Pearce fumbles and is unable to turn those interesting parts into something greater.

Hotel Artemis is frustratingly ambitious and I feel that it would have worked better as a mini-series on a streaming service. A lot of Hotel Artemis feels rushed, most especially the plotline with The Wolf King and the flat and unsatisfying ending of the film. There’s enough material and ideas in this film that had it been given more screen time and room to breathe, it would be a lot more entertaining.

As it stands though, Hotel Artemis is a memorable disappointment. 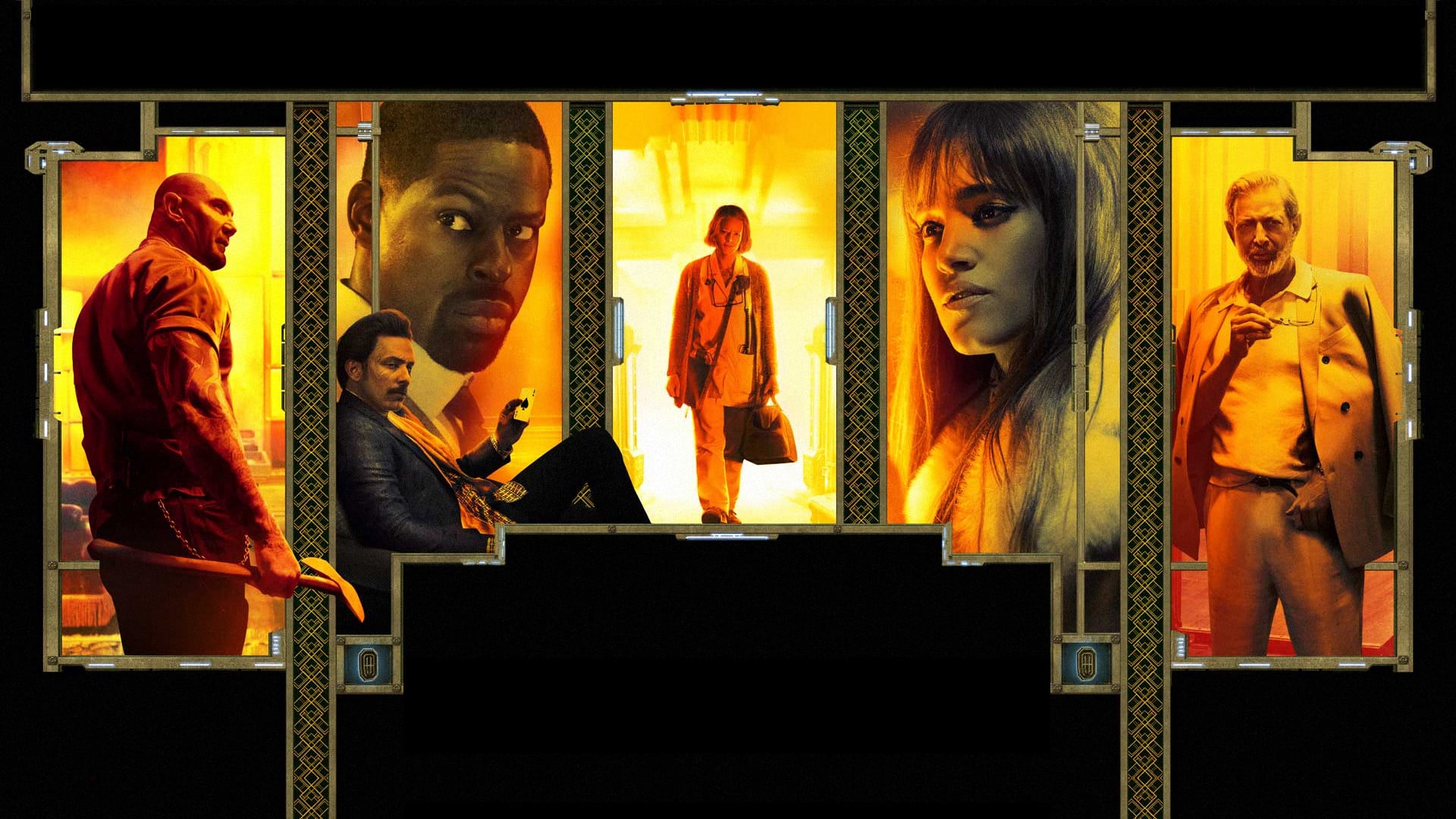 Was that Nice in the mid-credits scene?

Also, how did Everest survive?

I was quite disappointed by how quickly they killed off The Wolf King. They had built up his appearance and stature throughout the film and he was killed right after the discovery that he killed The Nurse’s son.