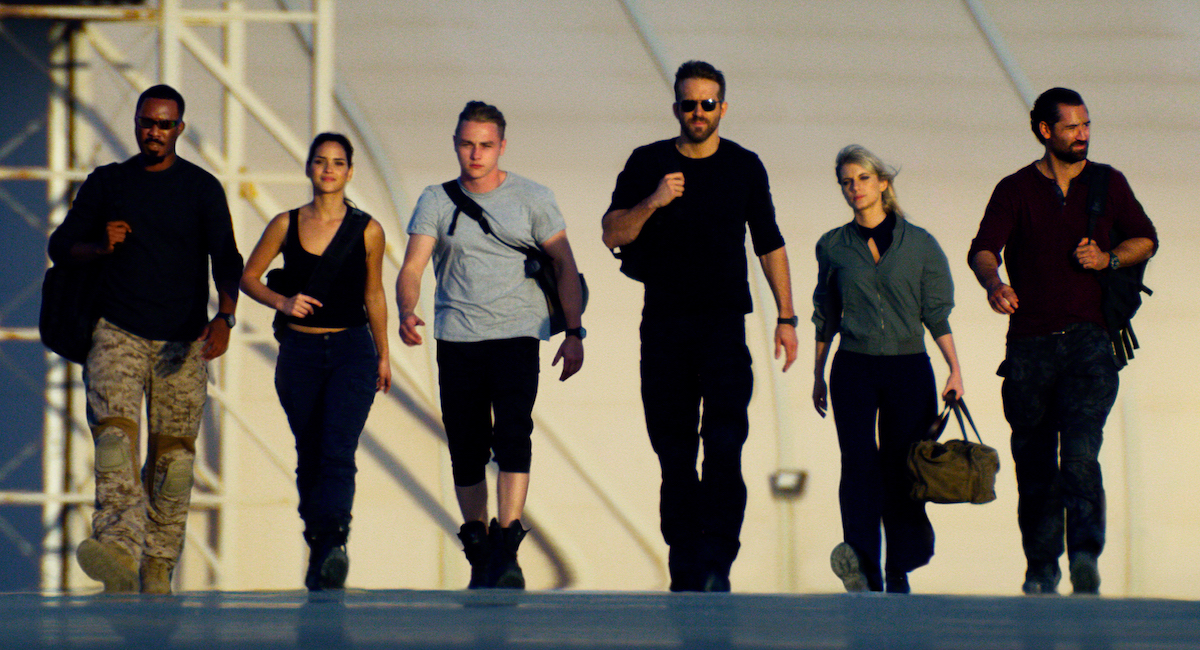 You can skip the rest of this review if you want. TLDR: 6 Underground is Michael Bay making a parody of a Michael Bay film.

I came into 6 Underground with very low expectations and Bay met them. There is not much to say about 6 Underground outside of it being a Signature Bay Film ™.

I would usually write a synopsis of the film here, but 6 Underground has very little in the way of a plot. Let me try though: Billionaire asshole (Ryan Reynolds) witnesses the horrors of a gas attack first-hand while on a photo op in a fictional foreign country ruled by a ruthless dictator, Rovach Alimov (Lior Raz). When said billionaire meets Rovach at an opera, he becomes obsessed with ridding the world of this dictator. He discovers that his billions can’t help him cut through government red tape, so he does what any self-respecting billionaire does: He fakes his death and recruits others to join his team of nameless vigilantes with the goal of making the world a better place – one dead dictator at a time. The first dictator on the list is Rovach.

The team of vigilantes have no names and they too have faked their deaths. They are all only known by their numbers, no names here. One is Reynolds, Two is a spy (Mélanie Laurent), Three is a funny and charismatic hitman (Manuel Garcia-Rulfo), Four (Ben Hardy) is a parkour artist (because all secret military teams need someone that knows parkour, because why I don’t know), Five (Adria Arjona) is a doctor, Six (Dave Franco) is a driver who loves bright get-away cars and Seven (Corey Hawkins) is an operator. Outside of One, Three and Seven, the rest of the crew are pretty bland, interchangable and forgettable.

First, the good things because I have a lot of complaints (normal for Michael Bay films). Corey Hawkins is fantastic in the film and imbues his character of Seven with more character than there is in the script. He is the highlight of the film. Reynolds is always playing Ryan Reynolds and at this point if you don’t like it, you don’t like it. I like it and he is entertaining in the film – he is playing Deadpool and Michael Bryce in this film. Manuel Garcia-Rulfo (looking like a gruff Gerard Butler) is able to squeeze as much comedy out of his part as he can, I appreciate that. The film is a tad over two hours long, though it felt longer – thankfully it wasn’t an “epic” Michael Bay film that runs 2.5 hours or more.

Now onto the negatives. 6 Underground is all of Michael Bay’s flaws amped up. The film is misogynistic, treating women like objects. Bay shoots women like he’s a man-boy shooting his own wet dream. And while Two is a badass spy, she also has to get half naked for an unnecessary sex scene that adds nothing to the film and leaves her having a conversation laying in bed in her underwear for no other reason than Michael Bay shooting this for teenage boys (and himself). There are Bay explosions all over – even falling i-beams explode for no logical reason. Cars flip over and explode as if manufacturers rigged all consumer vehicles with C4. Everything has to explode, even people’s heads – which brings me to the unnecessarily sadistic gore in the film. People are stabbed, run over by cars, tossed over SUVs at high speeds, motorcycle riders are crushed by cars, limbs are broke, people are stabbed multiple times by flying knives, shot in the face, chests exploded by sniper rounds, thrown off buildings, children are gassed and the list goes on and on. Bay has gone overboard with his sadism in this movie. The movie is shot like a two hour commercial. Action scenes could be exciting, but they are lost to the quick cuts, the crazy angles and the flashing lights. It’s all very vulgar and excessive.

Was I entertained by 6 Underground? For parts of it, yes. The opening car chase, while longer than necessary, was good. The shootout in the Hong Kong penthouse was neat. Hawkins, Reynolds and Garcia-Rulfo were fun to watch. But, the negatives highly outweigh the positives. This is a movie worth skipping, unless of course you’re a Michael Bay fan, then you probably shouldn’t have read my review.

I usually have notes about the film here that are spoilerish. But this film is so thin and vapid, there’s really nothing to discuss.