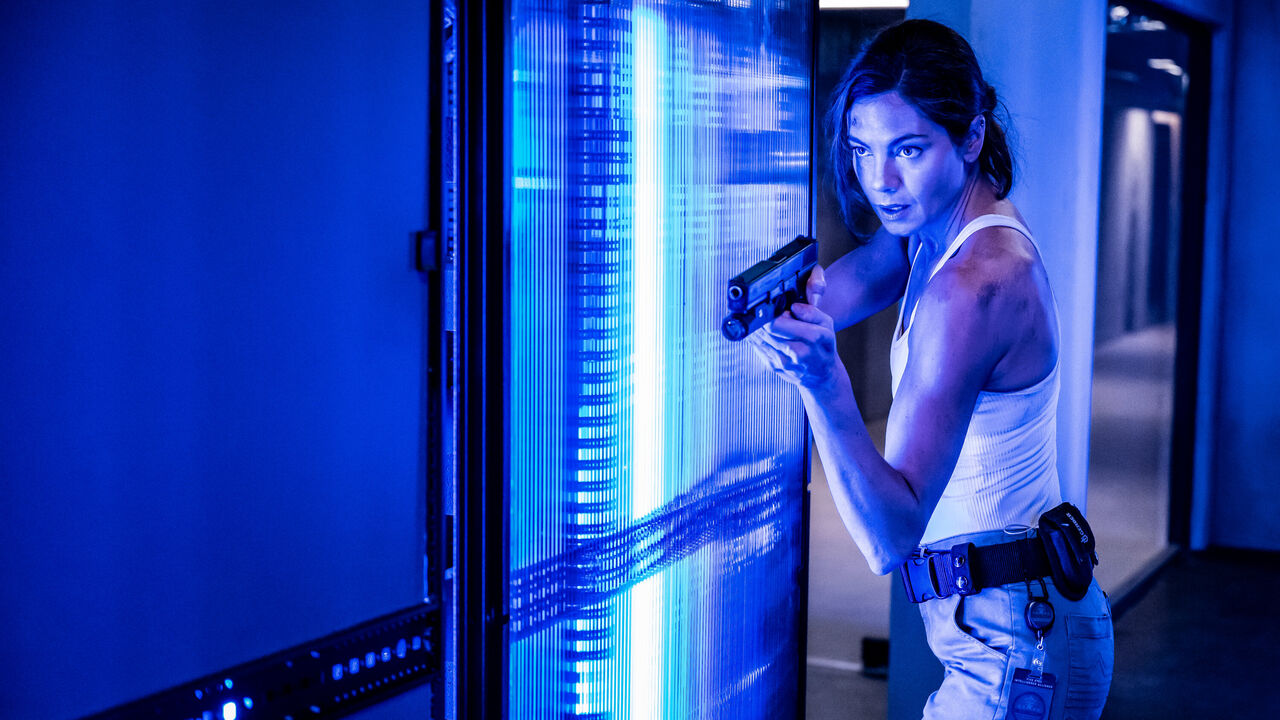 Every so often I like to pick a smaller movie to try out. Black Site seemed like a movie that could be a decent way to pass 90 minutes especially since it has some A-list actors (Michelle Monaghan, Jai Courtney and Jason Clarke). Did it succeed?

CIA analyst Abby Trent (Michelle Monaghan) is a grieving wife and mother. Her husband and child were killed in a bombing and she is obsessed with solving the mystery. She ends up working at a secret CIA base named “The Citadel” (“We built this place to fight terror with terror” is how it is hilariously described by a character). Also working at The Citadel is a contractor named Miller (Jai Courtney) and Mossad agent named Uri (Phoenix Raei). Things go awry when a mysterious detainee named Hatchet (Jason Clarke) arrives.

All the characters in the movie are two-dimensional cardboard cutouts. None of them have any depth which leaves us with no one to care about when bodies start going cold. Monaghan does her best with her thinly written character and tries to humanize an otherwise bland character. Courtney is given a character that basically grunts through the whole movie while being an illogical asshole – stereotypical tough guy contractors all have to be assholes, right? Clarke does not speak a line of dialogue until way late into the movie. His performance is all intimidation and menace.

The main problem with the film is that the Hatchet character is not given any motivation until the final minutes of the movie. That leaves the film feeling like a slasher film more than anything else because Hatchet only exists in the movie to cut people down and kill them. That’s not very interesting after an hour. By the time the ultimate (and predictable) reveal happens about Hatchet, I was too bored to care.

There are a handful of supporting characters, all of which are barely developed and not very interesting – and they only serve as canon fodder for Hatchet. For a secure site, the camera monitoring system sure has a ton of blind spots. I figure this makes it so that the slasher – er, Hatchet can wander around undetected and kill more people. The movie is unnecessarily gory.

I thought Black Site would at least have enough action to make it interesting, but there is not much action. And what action there is, is rather tame. Monaghan also spends a lot of time walking or running towards the camera with her gun at the ready. There was way too much time spent on these shots and it was tiring.

The conflict that kicks off the third act was completely contrived and illogical. Characters in Black Site act like characters in old slasher movies – they do illogical stupid things just so that the slasher can end up killing them.

I watched Black Site for free on Kanopy and even at this price point it was not worth the price of admission. Black Site is a movie with a storyline that has been done many times before and many times better. The ending of the movie clearly sets up a sequel, my advice to the filmmakers: Don’t make that sequel.

Watched at home, streamed on Kanopy.