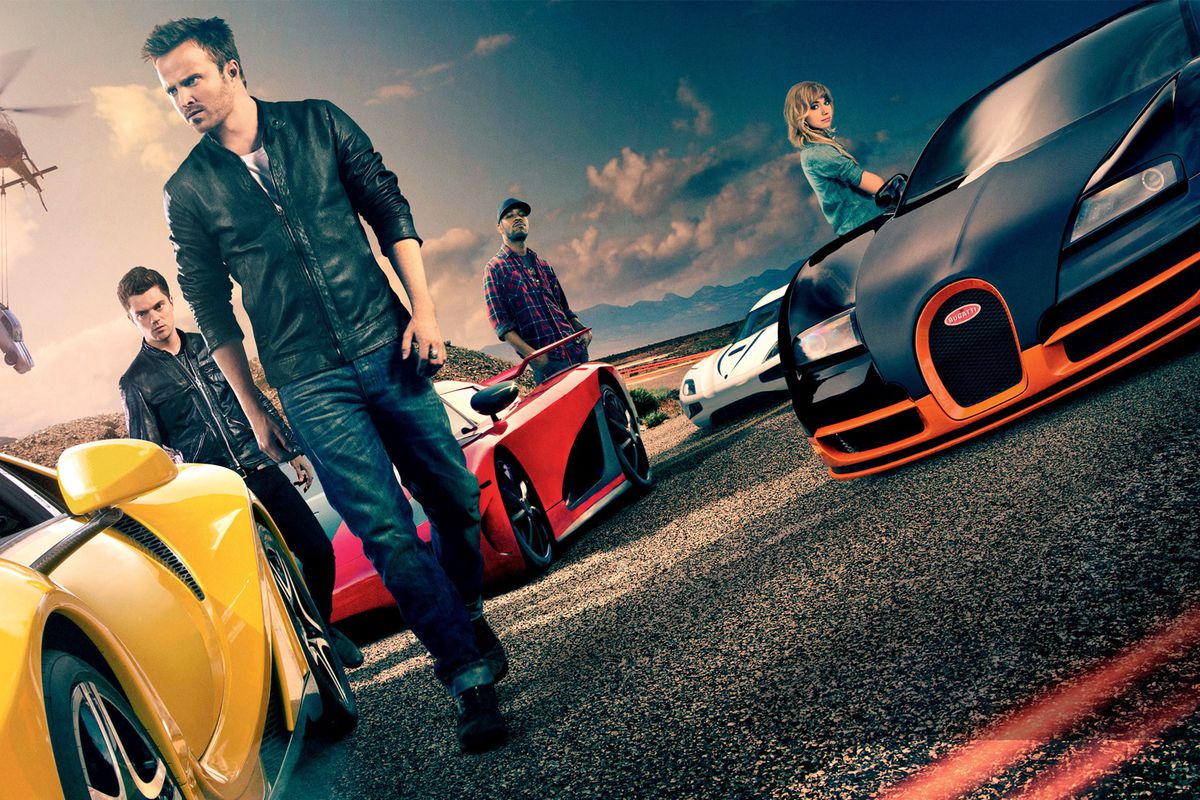 I have seen this movie multiple times, it is a guilty pleasure. Having the right expectations before seeing the film is key to getting the most entertainment out of the film. Getting this out of the way: This is the kind of movie that is so bad that it is good. This movie is based on a video game that was originally released in 1994 (twenty years before this film was released). And after six years it is still so bad that it is good.

The film follows Tobey Marshall (Aaron Paul) who witnesses his young mentee Pete (Harrison Gilbertson) die in a street race. Marshall goes to jail because the villain of the film, Dino Brewster (Dominic Cooper) escapes using a fake alibi. Marshall eventually gets out of jail and aims to get revenge in a way that all racers do: By racing the villain. Marshall is joined by his crew (Kid Cudi, Ramon Rodriguez, Rami Malek) and a numbers girl that is more than meets the eyes (Imogen Poots). The race that Marshall and Brewster are going to race is the De Leon which is run by Monarch (Michael Keaton).

The plot of the film is boiler plate and so are most of the characters. But, that’s not why I have seen this movie multiple times. The film is The Fast and Furious Lite, it knows this and does things to elevate itself. All the races are shot real-on-reel and they look fantastic. There’s something visceral about seeing stunts that are not computer generated. The race sequences throughout the film are loud, exciting and fun. Some of the fun is sucked out of the races because of the way that director Scott Waugh decided to shoot the film – like his previous film Act of Valor, Waugh decided to use a faux first person shooting style to try to capture the feeling of being behind the wheel during the races. This super wide angle GoPro shooting style really detracted from the excitement and he does overuse it. Outside of that though, I did like how the film looked.

The sound throughout the film is an aural feast. The sounds of the car engines are fantastic. The score by Nathan Furst is well-worth mentioning because it punches about its weight. He develops some solid themes throughout the score and there are some standout cues which work very well at enhancing what could otherwise have been a flat scene. Worth mentioning is the song Marshall Motors which is reminiscent of Danny Elfman’s track Finale from The Kingdom. Also worth mentioning is the track Switching Seats which reminds me of a cue from Wall-E.

Kid Cudi is charismatic and hilarious in his role, thanks Maverick! Aaron Paul deserves something better than a film like Need for Speed, but he does what he can. I have read that he was originally slated to be the villain of the film and I think that may have been a better choice for him. Imogen Poots is a high point for the film, she is sassy and likeable throughout the film. The weakest performer in the film is Dominic Cooper who couldn’t sell being the weaselly villain of the film – and his acting while racing was horrible, especially that scrunched up face he makes before he tries to ram people off the road, cringe. I was surprised by Michael Keaton showing up in the film, I guess he must have needed a pay day. Keaton is fine in the movie though.

If you have two hours to burn and just want something that you can watch without having to pay attention to dialogue or plot, Need for Speed is the film for you. It has some spectacular racing sequences with some really shiny expensive cars. There’s really not much more than that – but there’s something to be said about a simple film that doesn’t aim to do much more than please a crowd, and that is what Need for Speed is. The film runs two hours and ten minutes, but most of the running time is filled with loud car-related racing and stunts.