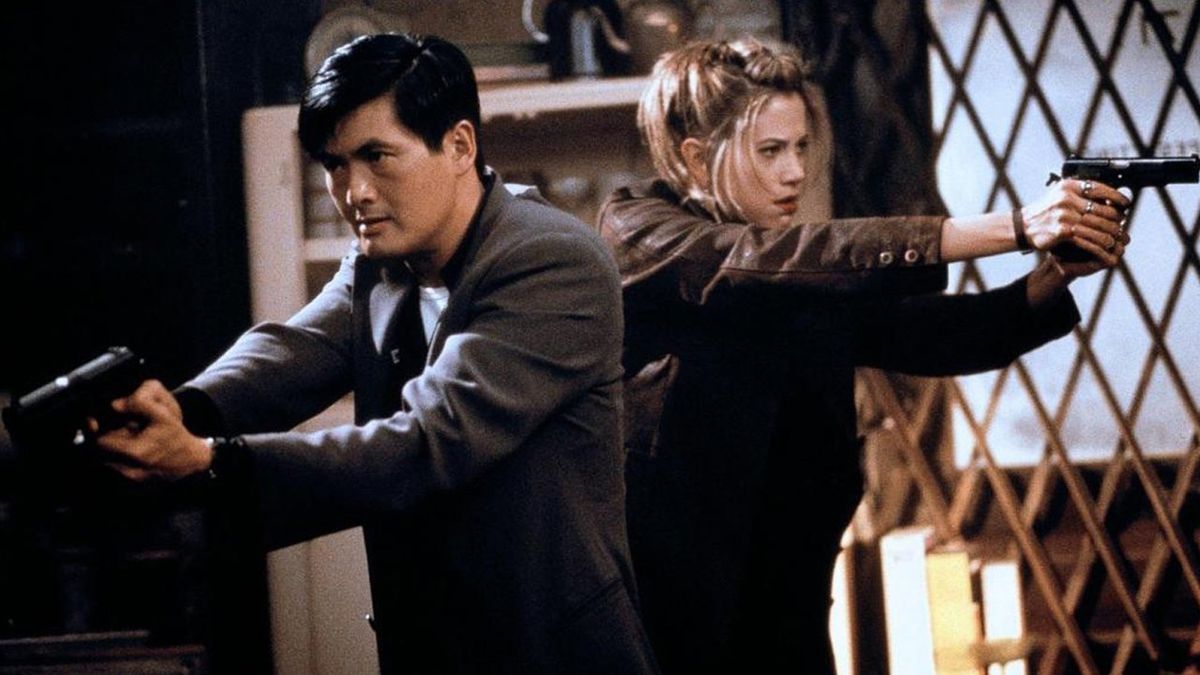 I watched The Replacement Killers originally during its theatrical release. I wrote my original review of the film on February 16, 1998 and I was able to find a copy of it floating around on the internet. Having just finished watching it again almost a quarter century later, have my thoughts changed about the film? Not at all.

The Replacement Killers has not aged well and is the epitome of late-90’s action films. The film is still a mediocre film with only one thing making it watchable: Chow Yun-Fat.

What follows is a lightly edited version of my original 1998 review of the film. 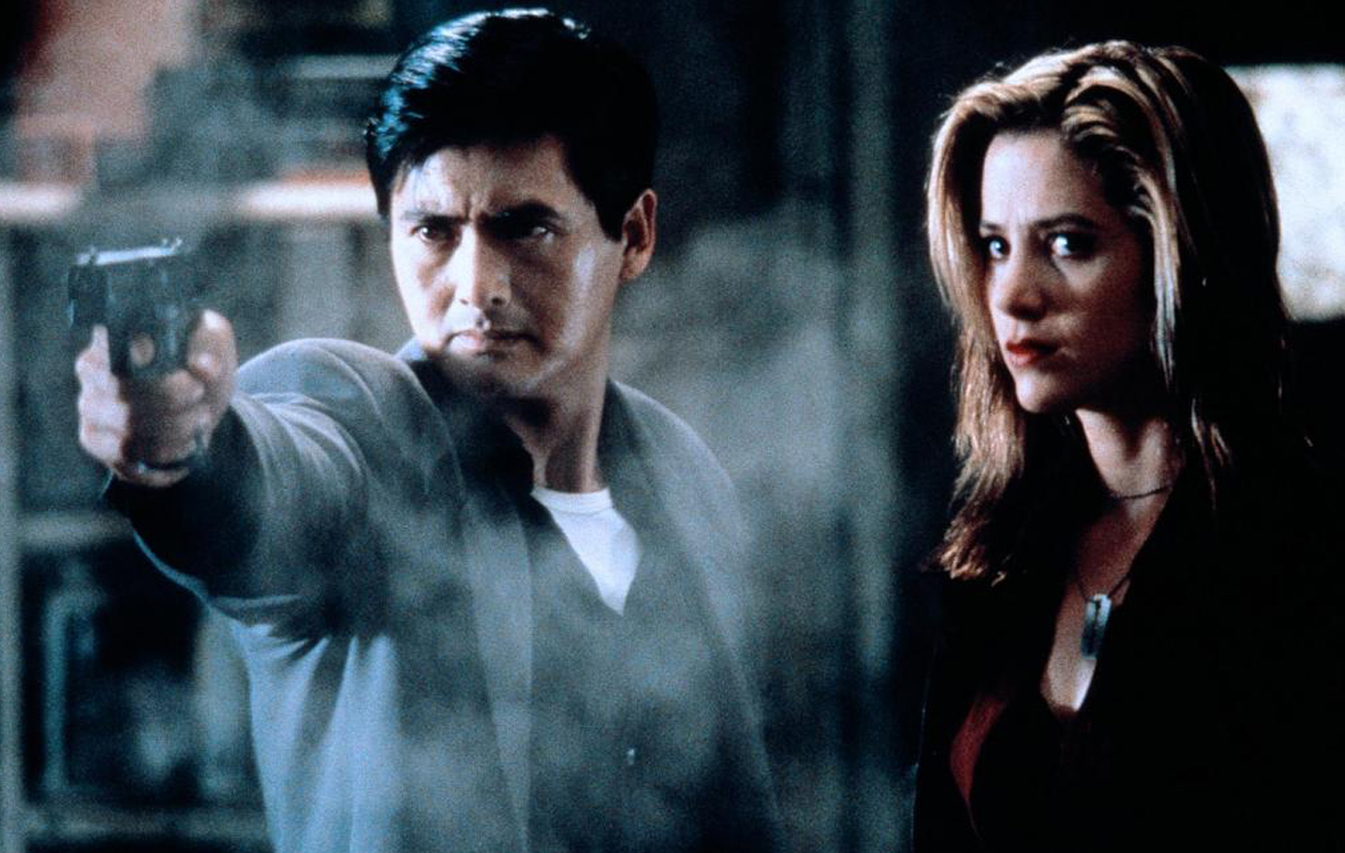 Chow Yun-Fat is a world renowned actor from Hong Kong, largely known for his incredible work with John Woo. But, like all other things that are not American, he’s not well known here in the US. The Replacement Killers aims to change that. But, can it?

John Lee (Chow Yun-Fat) is a hitman for hire. Asian crime syndicate boss, Terrance Wei (Kenneth Tsang), wants a family member of police officer Stan Zedkov (Michael Rooker) dead as part of retribution for Zedkov killing Wei’s son. Wei hires Lee to do the hit, but while Lee has cross-hairs trained on the family member, he’s unable to do the job. John Lee might be a killer for hire, but there are things that he cannot do. Wei finds this unacceptable and Wei, now gone mad, wants a lot of blood. Wei brings in the replacement killers. While trying to leave the US, Lee elists the help of Meg Coburn (Mira Sorvino) who is a master document forger.

That’s as far as the story goes. The script by Ken Sanzel is weak and flimsy. It’s an excuse for first-time director Anton Fuqua to move from action scene to action scene. Chow Yun-Fat is given only a handful of lines to perform and the rest of the film is him running around with dual pistols.

I mentioned earlier that Chow Yun-Fat is a world renowned actor. I stress the word “actor”. With The Replacement Killers, Hollywood has tried to boil Chow Yun-Fat down to just a typical “action hero”. This is a sad thing to do, for Chow Yun-Fat is more than just that.

Anton Fuqua, a former music video director, tries hard to pay homage to John Woo (who is one of the producers). It’s unfortunate that rookie Fuqua is unable to create the same type of action that master Woo can. Fuqua pulls from a bag of Woo’s tricks, including Woo’s signature slow-mo shots. But, the feel of Fuqua’s direction is purely mechanical. And this mechanical feeling is not limited to only Fuqua’s direction. Everyone involved seem to be just going through the motions.

Yes, there are a lot of action sequences, but the problem is that Fuqua is never able to inject adrenaline into the sequences. The sequences are highly derivative and fall flat.

There were no real memorable action sequences from The Replacement Killers. The action flies from office, to restaurants, to car washes and to dance clubs without any real connection to them. I think that the movie would have worked out had the characters not been so one dimensional. Mira Sorvino’s Meg is bland and she has nothing that we can care about. Chow Yun-Fat’s John Lee is equally bland. My test for bland action heroes? Easy: If the hero gets shot in the shoulder (where most action heroes get shot) does the audience cringe in sympathetic pain or not? I didn’t cringe when John Lee was shot in the shoulder.

The one redeeming quality of The Replacement Killers is the studio’s perceived big selling point of the film, Chow Yun-Fat. Though he is not given enough to do, he brings a sort of charm and grace to his part. It’s hard to describe Chow Yun-Fat and the way that he is onscreen. He is suave, cool and smooth. And he just looks awesome with two pistols in hand. I just wish the script had more for Chow Yun-Fat to do.

It’s hard for me to recommend a mediocre action film like The Replacement Killers. If it had not been for the presence of the ever-cool Chow Yun-Fat, there would be no merit to this film. But, since this is Chow Yun-Fat’s American debut film, it serves as an introduction to him for many. And for that reason, I lightly recommend this film. This movie feels like a ninety minute music video. See this film at a matinee showing or on video.

If you think that Chow Yun-Fat is cool and would like to see more of him, check out some of these older films that he did with John Woo, which I highly recommend: The Killer, A Better Tomorrow and my ever-favourite Hard-Boiled. These films will wow you more than The Replacement Killers.