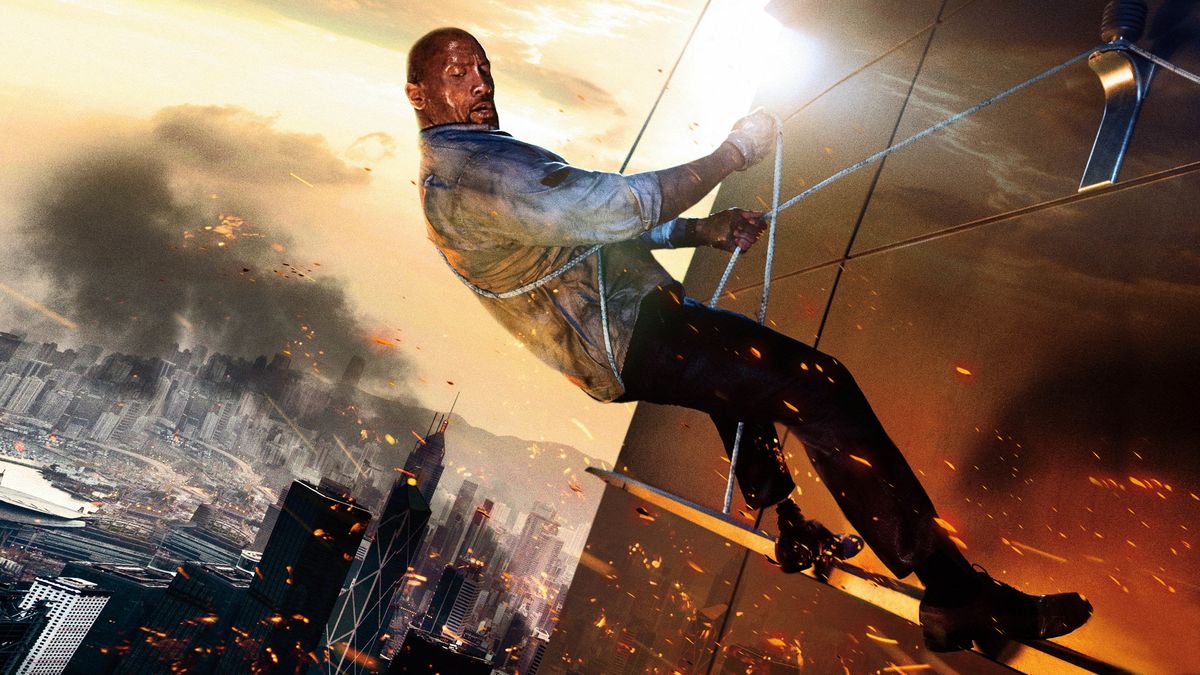 If I had to pick one word to describe this film, it would be “lazy”. I understand that Skyscraper is made to be a summer popcorn flick – I love summer popcorn flicks. But, the film is so lazy in everything it does that it is no fun. Not even Dwayne Johnson’s charisma can save this one.

Former FBI Hostage Rescue Team leader, William Sawyer (Dwayne Johnson) is hired by a Hong Kong tech entrepenuer, Zhao Long Ji (Chin Han) to assess the security of his new skyscraper, The Pearl. The Pearl is the world’s tallest building standing at 225 floors and reaching 3,500 feet into the air. Sawyer and his family are staying on the yet-to-be-open residential top half of the building as guests of Zhao while Sawyer completes his project. A group of mercenaries start a fire in the middle of the structure for reasons that are explained as the movie plods along.

Skyscraper suffers from borrowing too much from too many other films that it becomes a generic film. It borrows heavily from Die Hard – complete with a section of the film with a man swinging on rope on the outside of a building. I’m surprised they didn’t have Johnson crawling through man-sized air ducts and sarcastically quipping, “Come out to the coast, we’ll get together, have a few laughs…”

The film has so many cliches: Single man saves the day? Check. Family in peril? Check. Child in peril? Check. European villain? Check. Surprise out of nowhere bad guys? Check. It gets a bit silly at times.

The leaps in logic are even sillier. One of the large action pieces has Sawyer climbing more than 90 floors on the side of a construction crane in seemingly less time than a elevator can get up there. He gets to the top, is not winded nor tired because he then swings hand-over-hand to the outside of the crane to then climb to the top platform; Sawyer then shows us his secret crane operating skills and then he has enough energy to run and make an inhuman jump. I can suspend my disbelief only so far.

At some point Sawyer remarks, “This is stupid” and I couldn’t agree more.

Another thing, there was no need for Sawyer to be without a leg. Outside of one stunt that is shown in the trailer and a scene where he is hanging from his prosthetic leg, any other scene that has a specific reference to the prosthetic leg could have easily been done without the prosthetic leg.

There are some good points about the film, they get lost in the mix though. There were attempts at humor throughout the film, a lot of it falls flat, but the continued references to Duct tape got chuckles and I appreciated them.

While I have been going on and on about how bad Skyscraper is, the film does have one quality about it: It is so bad that it is decent to watch when nothing else is available. If you can turn off your critical thinking while watching the film, Skyscraper remains watchable and entertaining for its short runtime. Would I recommend the film? Only if there’s nothing better to watch or if it happens to show up on your favorite streaming service as a recommendation.

I originally saw Skyscraper in Cinemark XD and the experience was nice because of the larger screen and the seemingly brighter and sharper picture. Barco’s Auro 11.1 sound presentation didn’t make much of a difference.

Today, I watched the movie a second time at home on 4K UHD Blu-ray in Dolby Vision with Dolby Atmos. The image quality of the 4K UHD Blu-ray is gorgeous and the Dolby Atmos soundtrack had some really good use of the overhead channels. One good example being when the mother and twins are stuck in the park that is on fire. The kids get separated and a burning tree creaks and eventually falls. The use of sound there was incredible and very realistic. The 4K UHD Blu-ray was on sale for $10, cheap enough to pick up so that I could watch it with my son (his first time seeing this film and he too was catching onto all the silliness in the film).