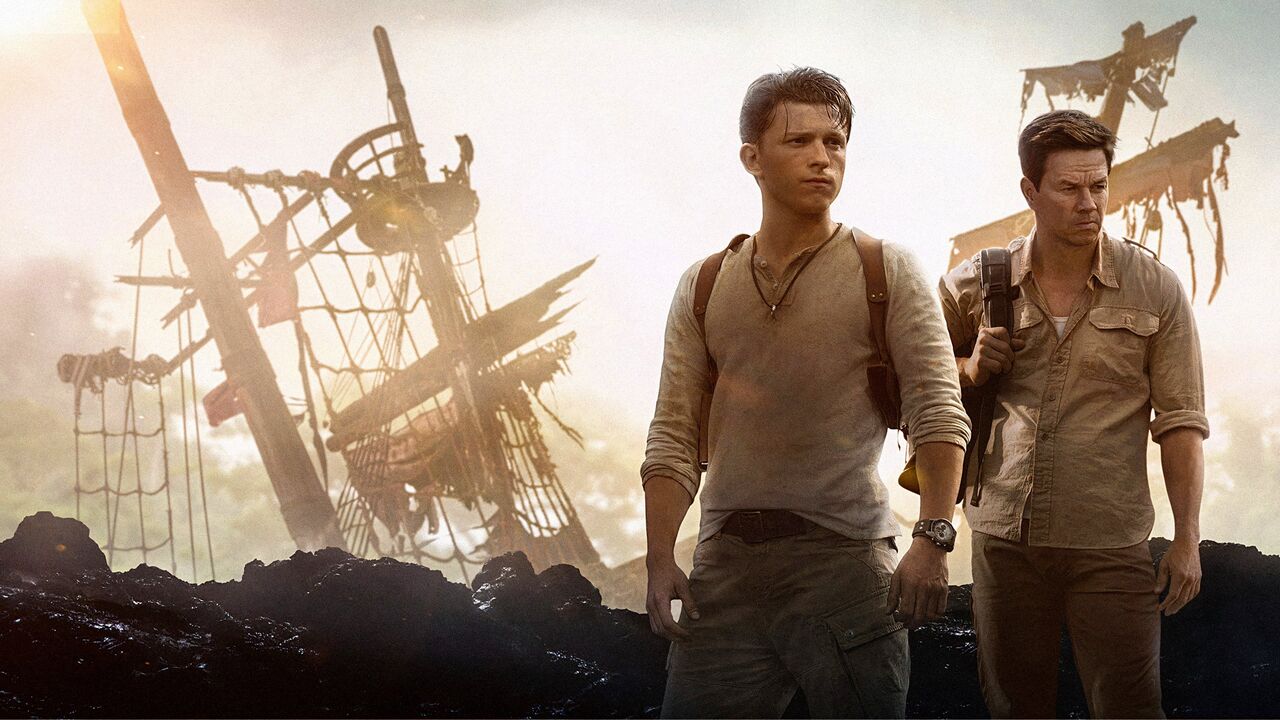 I am a huge fan of the four mainline Nathan Drake Uncharted games. I have my PS4 stored away so that I can play them again at a later time. The four games tell interesting stories, are super fun to play and the characters are endearing.

The fan film Uncharted from 2018 that stars Nathan Fillion as Drake and Stephen Lang as Sully was absolutely perfect. Not only did it capture spirit of the games, the portrayal of the characters were spot on. Plus, Ernie Reyes Jr. was hilarious in the short.

I came into this new film starring Tom Holland and Mark Wahlberg with a bit of trepidation.

Nathan Drake (Tom Holland) is recruited by Victor “Sully” Sullivan (Mark Wahlberg) to track down and recover a large treasure that Ferdinand Magellan amassed. Along the way, the two have a tenuous working relationship with Chloe Frazer (Sophia Ali). Also on the trail of the treasure is Santiago Moncada (Antonio Banderas) who has hired a treasure hunter (and mercenary) named Braddock (Tati Garbielle) to do the heavy lifting and fighting.

There are bits of the games in this movie – the part that stood out is the opening sequence which comes from the fourth game. But other than that, not much of the movie is from the mainline games. This actually feels like something of a prequel to the games.

The humor in the movie is good, there are some good jokes that land. I especially loved the running joke with the Scottish guy. And it helps that Holland and Wahlberg play off each other well.

Tom Holland is playing an action character named Nathan Drake and he’s fine in the role – he has though, failed to convince me that he’s the Nathan Drake from the games.

Much like how Ryan Reynolds seems to always be playing some version of the same character, Wahlberg has fallen into doing the same. This leads to Mark Wahlberg being Mark Wahlberg and not Sully – it also doesn’t help that the version of Sully in the movie is completely unlikable. Stephen Lang’s Sully in the fan film was what Sully should have been in this movie.

The real star of this movie is Tati Gabrielle who is downright menacing as the badass Braddock. Kudos to her for making the role real.

There is a lot of backstabbing in this movie. Maybe too much of it, it gets to the point where I started thinking that instead of naming the movie Uncharted, they should have named it Backstabbed.

There is a great cameo in the later part of the film that is thrown in for fans of the game. It put a smile on my face seeing this actor in the movie – it was just the right amount of cameo, just enough for fans to recognize and enjoy, but not in your face.

While this movie has the name of the games. While it has characters with similar names. And while it has some iconic moments from the games. This movie is not Uncharted. It is a standard fare action flick.

As a fan of the Uncharted games, I was left a bit disappointed even if I were entertained. As an action film for those unfamiliar with the game series, this movie is a fun and entertaining.