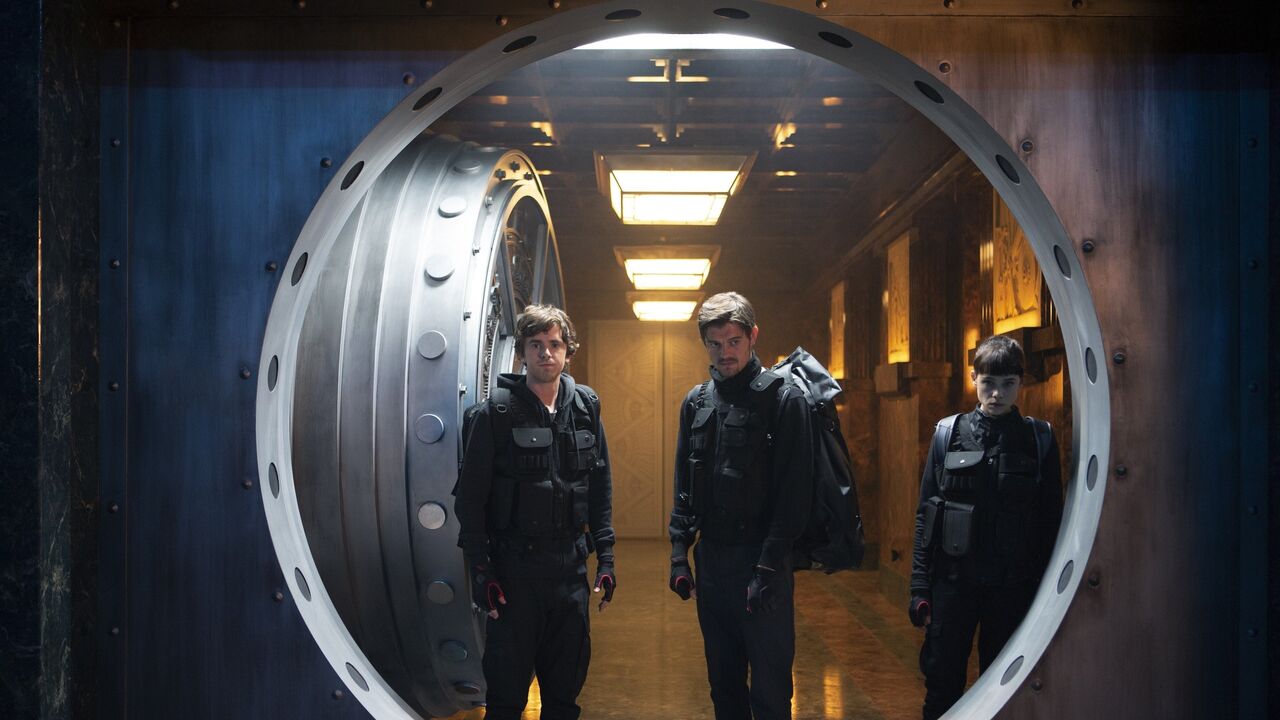 Heist films have been done before and they are made following a basic template: Impossible heist to be attempted, meticulous planning, flawless execution that is derailed by an unforeseen obstacle which eventually forces some clever last minute twists.

For any heist film to stand out then, there needs to be more than just the heist itself. This usually comes in the way of having special and memorable characters like the ever cool Danny Ocean; or the forever eating Rusty Ryan; or a Chinese acrobat; or a bored, clueless and hilarious bank teller who specializes in cracking Hans Wagner safes; or how about the working mom with a side hustle moving merchandise on Ebay; or a hacker who uses an eight ball for a trackball; or even a bunch of surfers dressed up like Presidents. I might not remember the heist, what was taken or even if the heists were successful, what I remember are the characters.

Unfortunately, The Vault has no memorable characters and the way that the story is structured steals the focus away from an interesting character – mainly because of the performance of the actor portraying the character.

The Vault follows Thom (Freddie Highmore) who is an unlikeable arrogant genius who is so full of himself that he toys with and turns down offers from multiple large corporations. Thom is pinged by Walter Moreland (Liam Cunningham) who is the head of a salvaging team – where the words “salvage” and “theft” seem interchangeable. Moreland wants to rob the Bank of Spain during the finals of the World Cup and recover something that he originally picked up from the bottom of the ocean.

The Vault gets started without bothering to really introduce us to the crew. The movie unfortunately does not let us get to know any of the characters well, it is all superficial. This makes watching The Vault feel like watching strangers do random things, whether they get caught or not doesn’t matter. And it is this detachment from the characters that steals the thrill from the movie.

Thom is highly unlikeable and seems to be able to do everything because… he’s an engineer and a genius? Thom always knows how to do whatever is necessary at the exact moment the movies requires it – this lazily moves the plot along without having to deal with how Thom knew how to do what he did. Also, the opening premise that Thom, after getting a strange text from an unknown number would wander away and meet with dubious strangers is contrived and unconvincing. Not only that, without much questioning, he happily joins a crew planning to rob the Bank of Spain. Why? The movie posits he does it because he’s bored. That’s a hard sell.

Liam Cunningham gives a good performance as Walter Moreland, the man who has everything, but continues to pursue his passion of hunting and finding rare items. The script and movie squander Cunningham’s talents by making Thom be the center of the movie — this movie would have worked much better if the script was tweaked to focus on Cunningham’s character instead of Thom since Moreland’s motivations are more interesting.

The movie could have earned extra points if the heist itself was any good, but even that was mediocre, full of plot holes and conveniences. For instance, we get the usual man-sized air ducts. We get guards in all the places where they are not needed. The places that truly needed to be secured are guard-free (for instance, if the vault was so important, why were there no guards placed directly outside of it?) We get a state-of-the-art monitoring system that doesn’t alert to secure doors and locks being accessed and opened. We get bank robbers who are so inept that they don’t wear gloves and leave fingerprints all over the place.

The Vault is a rather pedestrian paint-by-the-numbers heist film with a twist that can be seen from a mile away. Most of it was predictable because it follows the standard heist formula so well. Much of the heist itself, which populates the last 30-minutes of the movie, wasn’t suspenseful or thrilling. And there were so many conveniences and contrivances that made the heist completely unbelievable. It doesn’t help that the characters were bland and not memorable. So, by the end of the movie, I had forgotten about the movie. I couldn’t have cared if the crew succeeded of failed. It was all for naught.

The hunt for Drake’s treasure sounds like an idea taken from Naughty Dog’s Uncharted series of games for PlayStation. The Vault felt like a Nathan Drake adventure minus the fun, action, excitement, thrill, charm and characters.