So, I have been using Plex DVR paired with two SiliconDust HDHomeruns. For the most part, the combination has been working great – especially considering that Plex DVR is still in beta. Here is my earlier write up about the whole setup. There was one thing bugging me and it is more with the SiliconDust Extend units than Plex DVR.

The SiliconDust Extend units differ from the other HDHR models (Connect and Prime) in that it has built-in hardware to transcode MPEG-2 streams to AVC H264. I need this functionality because the passively cooled Plex server I built (Atom-powered) is not powerful enough to transcode videos for viewing on an Apple TV. The functionality works fine, but there are some drawbacks. Before going into the drawbacks, it’s good to see what transcode profiles there are on the Extend. (source): 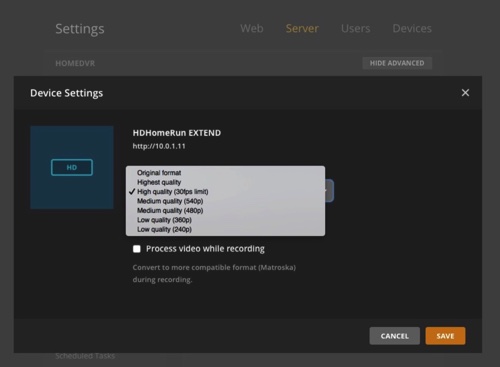 For the “Mobile” transcode profile, the Extend does a few things:

None of the modes are perfect for me. Plex player (at least on Apple TV and in a web browser) does not de-interlace videos, so the Heavy setting does not help when channels are interlaced. But, Heavy setting is great for native progressive streams because it allows for the full stream to come through with no added compression.

What would be good is if SiliconDust would implement a transcode profile that sits right between Heavy and Mobile that does only one thing: De-interlaces video. 480i/1080i videos are de-interlaced and no extra compression is applied. 720p video (whether it is 30 or 60fps) is left completely untouched.

With this setup, at least the 720p videos are converted to AVC H264 and then left untouched. No frames are stripped out, no extra compression is added. The 480i/1080i videos still suffer from being overly compressed, but at least they will be watchable in Plex because they are de-interlaced.

In the San Jose, CA area about half the channels I have in Plex DVR are interlaced:

This is a good workable solution for the time-being. Maybe one day SiliconDust will add the profile that I described.