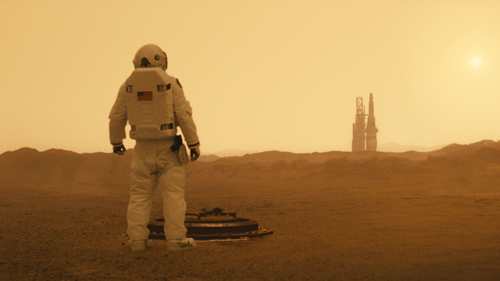 We need more hard science fiction films like Ad Astra (and Interstellar and Gravity) that look to the near future of humanity and space exploration – rather than to the past or the far future. These types of films spark the imagination of filmgoers to what might actually happen in their lifetimes – and maybe inspire some of the younger audience members to pursue a life in science.

Outside of that, I am torn about how I feel about the film Ad Astra. The science in the film is well-done and very thoughtful. Small things in the movie make it feel like the world is lived-in by humans and a natural extension of where our current society would end up if we encouraged space exploration – and how commercialization would affect space travel. I loved the company that does commercial space flights to the Moon, the Moon base and the politics of the Moon. The Mars base was less thought out, but still visually stunning. The film itself is beautifully done – from cinematography to production design, this is a film that will be studied for years to come. For the science, visuals and art of the film, this film is borderline perfection.

The part of the film that is supposed to draw the audience along for the ride is weak. The film follows Roy McBride (Pitt) in search of his lost father (Tommy Lee Jones). The gravitas of the father-son storyline feels wholly manufactured and rather hollow. McBride seeking to find meaning to life and loneliness starts off strong, but peters out half-way through the film because we are never really given the chance to see the relationships between McBride and his father – and even his ex-wife (Liv Tyler). Without that connection between the audience and the characters, the well-intentioned closure to McBride’s journey of discovery feels empty.

The journey itself was filled with visual wonder, but the events of the journey are coincidental and at times feel as if they were filler.

Brad Pitt turns in a great and controlled performance in the film. He continues to show that he is one of the great actors of our time – this is one of my favorite performances of his since Seven. Ruth Negga also turns in a memorable performance in the film, though her time on screen falls mainly into the “filler” part of this movie, which is unfortunate. Yes, Negga’s character has a connection with McBride in a substantial way, but it was all payoff and no build up – it was rather coincidental and not earned. Liv Tyler seems to be typecast as the doe-eyed girlfriend, ex-wife, wife, spouse. I wish she had gotten more to do.

Max Richter’s score for the film is worthy and fits the film perfectly.

I wish I enjoyed this film more.

The journey felt rather like a stitching of separate sequences rather than one organic storyline. The distress call and the crazy baboon attack felt completely tacked on just so that there could be some action between human dialogue. The lunar rover sequence was genuinely exciting and showed the state of the lunar wars, but it too felt a bit inorganic.

The whole sequence of the landing on Mars with the co-pilot in a stressed state was great for showing McBride’s steely nerves, but we had already seen those steely nerves when he fell from the space antenna – and all the references to his heart rate not going above 80bpm under stressful situations. I also question how that co-pilot was able to be in command – especially given that McBride is constantly being tested for his mental fitness for space duties.

McBride inadvertently killing the crew of the ship to Neptune felt more like an action sequence for action sequence sake. I understand that it is supposed to draw a parallel with what his father did on the Lima Project base, but again, it did not feel organic.

There is not enough time spent with elder McBride and child McBride for me to care about their relationship and elicit any emotion when elder McBride drifts off into space. The small flashbacks tell small portions of the relationship between father and son, but they were so superficial that they did not amount to much.

I loved that Virgin was the commercial space-liner to the Moon. I loved that the Moon base has a Subway and other Earth amenities. I really liked that the movie explored the human conflict for resources on the Moon and that not all is well on the Moon. These things felt real.