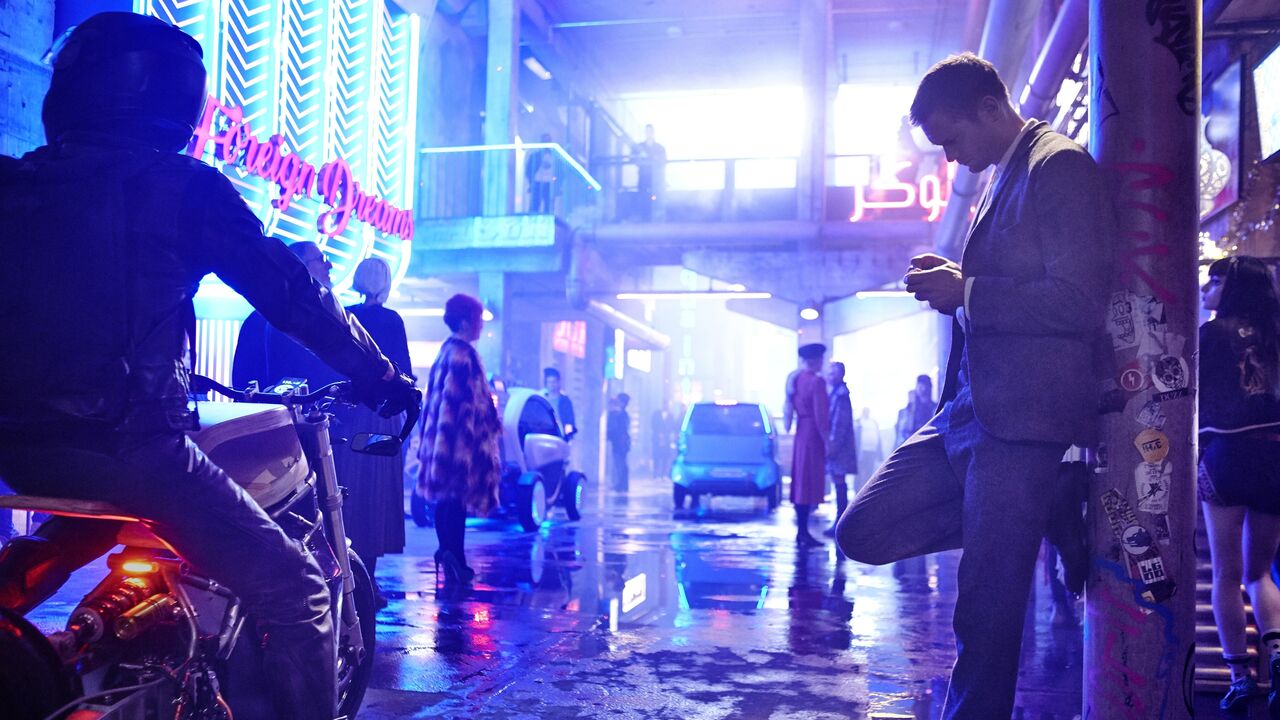 Duncan Jones has directed two of my favorite sci-fi films: Moon and Source Code. I particularly love Moon because it is such a well-made movie with a strong story and a brilliant performance by Sam Rockwell as Sam Bell. Of course, Jones also directed Warcraft, which I have in my notes for the movie:

Is Warcraft a bad film? Yes, very much so.

So, I was hyped for Mute because it takes place in the Moon universe – complete with information about Sam Bell – but also quite hesitant because of Warcraft.

In a future Berlin, Leo (Alexander Skarsgård) is an Amish bartender who, because of a childhood accident and a decision by his parents, is mute. He is deeply in love with Naadirah (Seyneb Saleh), a woman with something she really needs to tell Leo about. There’s also an AWOL Army surgeon Cactus Bill (Paul Rudd) who works for the gangster Maksim (Gilbert Owuor). Bill also has something that he’s hiding. Bill is buddies with Duck (Justin Theroux) who is all sorts of wrong as a character.

One night, Naadirah disappears and this sets Leo off on a search for her. In parallel, Bill is looking to escape from Berlin with his daughter. He is desperately waiting for new IDs from Maksim. The two stories spend most of the time circling each other and at times intersecting each other coincidentally. The intersections were very annoying, even late into the movie when it is revealed why.

The cyberpunk aesthetic and vibe was well done and does not slipping into being cheesy. The world generally feels, sounds and looks like there was some deep thought put into it – it evolves a lot of visual ideas from movies like Blade Runner into something of its own. Mute is visually stunning and each frame of the movie is full of details. Unfortunately, the story feels like it was a second thought to the world design.

Mute is a fully realized world in search of a story to live in it.

In my notes that I took while watching Mute I wrote “35 mintues into the movie, I still have no idea what is happening.” The plot for this movie meanders and is so nebulous. The structure of the movie makes it more confusing and frustrating than it should have been. And by the time the movie wraps up, I was left feeling that the movie as a whole was non-sensical.

Leo is just not an interesting character and while he couldn’t speak, Alexander Skarsgård is expressive enough that he makes the most of the character. But, in the end, not even Skarsgård could save this movie and make enjoyable. There is so little that is shown about Leo that it is hard to understand why he is so angry and so violent. The character is opaque and obscure to the point that I did not care if he found Naadirah or not.

Paul Rudd and Justin Theroux seem to try to pull the movie up, but there are problems there too. Paul Rudd plays completely against type and is a total asshole in this movie. Making it hard to enjoy his screen time. Justin Theroux plays a character so vile and disgusting that his screen time was hard to watch.

Everything in this movie works against the movie being enjoyable.

A draw for me was that there would be some more info about Sam Bell and there were tiny bits sprinkled throughout the film. It was awesome to see Sam Bell and to get a little more info on what was happening with him. It was also neat to see Lunar Industries within the world.

Being a fan of Duncan Jones’ movies Moon and Source Code, I was severely disappointed with Mute. I do not recommend Mute. I have read that this is the second movie in a Moon trilogy, I am hoping the third film gets made and I hope that it is better than Mute.