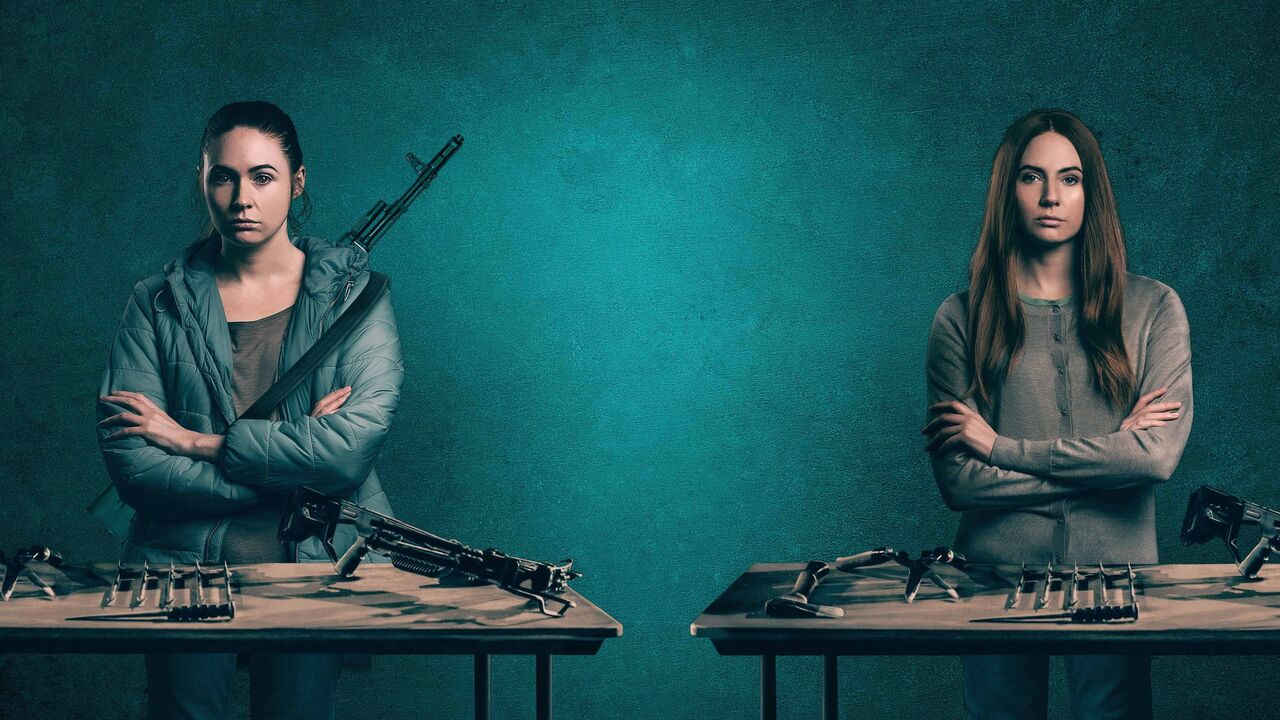 The Dual is a high concept movie with big ambitions. I don’t think it quite gets to where it aims to be and it shoots itself in the foot trying to be more clever than it thinks it deserves to be.

Sarah (Karen Gillan) is a woman who lacks any ambition – and apparently doesn’t have a job – living out her life in what seems like solitude. She does have a detached abusive boyfriend, Peter (Beulah Koale) who is a complete dick that talks down to her when they are on video conferences. She has an overbearing mother (Maija Paunio), who is the only other person than Sarah can lean on. One day, Sarah gets a diagnosis that she will die in a matter of months from an disease that we’re never told about.

Sarah’s world looks, for all intense purposes, like ours but is more technologically advanced. In her world, people can be cloned in a process that takes an hour. These “replacements” spend time with the originals and learn about the original’s preferences, lifestyle and habits. When the original finally dies off, the replacements are there to keep their families happy. Sarah chooses to go down this route.

Unfortunately for Sarah, her replacement has blue eyes, is skinnier, more attractive to her boyfriend, more lovable for her mother and also more adventurous. Sarah gets some news that requires that the replacement be “decommissioned”, but because the replacement has been around for a few months, the only way to avoid having two Sarah’s in the world is for them to face off in a dual – literal to the very sense of the word. They have time to train and then they both go into an arena with only one coming out alive.

Dual is a movie that distances itself, its characters and even the world it presents from the audience. It is an almost colorless world that brings a chilly sense to the whole atmosphere of the movie. The humor in the movie is dark and very dry – but there were many times that it got me to laugh loudly. The flat awkwardly delivered lines from most of the cast created extra uneasiness.

Dual seems to want to deal with identity and being unique, but it feels very hesitant to delve into the exploration. The screenplay by writer/director Riley Stearns is happy to bring up the theme of identity and also about loneliness, but Stearns doesn’t run with the themes. Instead, Stearns’ script meanders around for a while and leaves the film feeling superficial.

Karen Gillan is fine as Sarah and Replacement Sarah. She does enough to make the two different and unique. Aaron Paul plays his part with a straight-face and that was brilliant because it made him even more funny onscreen, the hip hop dance scene was absolutely hilarious. Beulah Koale is worth mentioning because he makes his character so unlikeable and he does it so well without going over-the-top.

Dual has a high concept that worked alright until it hit the home stretch where it deviates and takes a wrong turn in its narrative. Dual spends most of its time setting things up – from the very opening scene of the movie showing a dual – but in its final minutes, the script flounders and cannot nail the landing. Instead of paying off what it setup, the script tries to be clever and feels like Stearns did not know how to wrap up the story they had been trying to tell. In the end, I was left completely let down and disappointed by the movie – and feeling that I had just wasted 94 minutes of my life. I don’t recommend Dual. 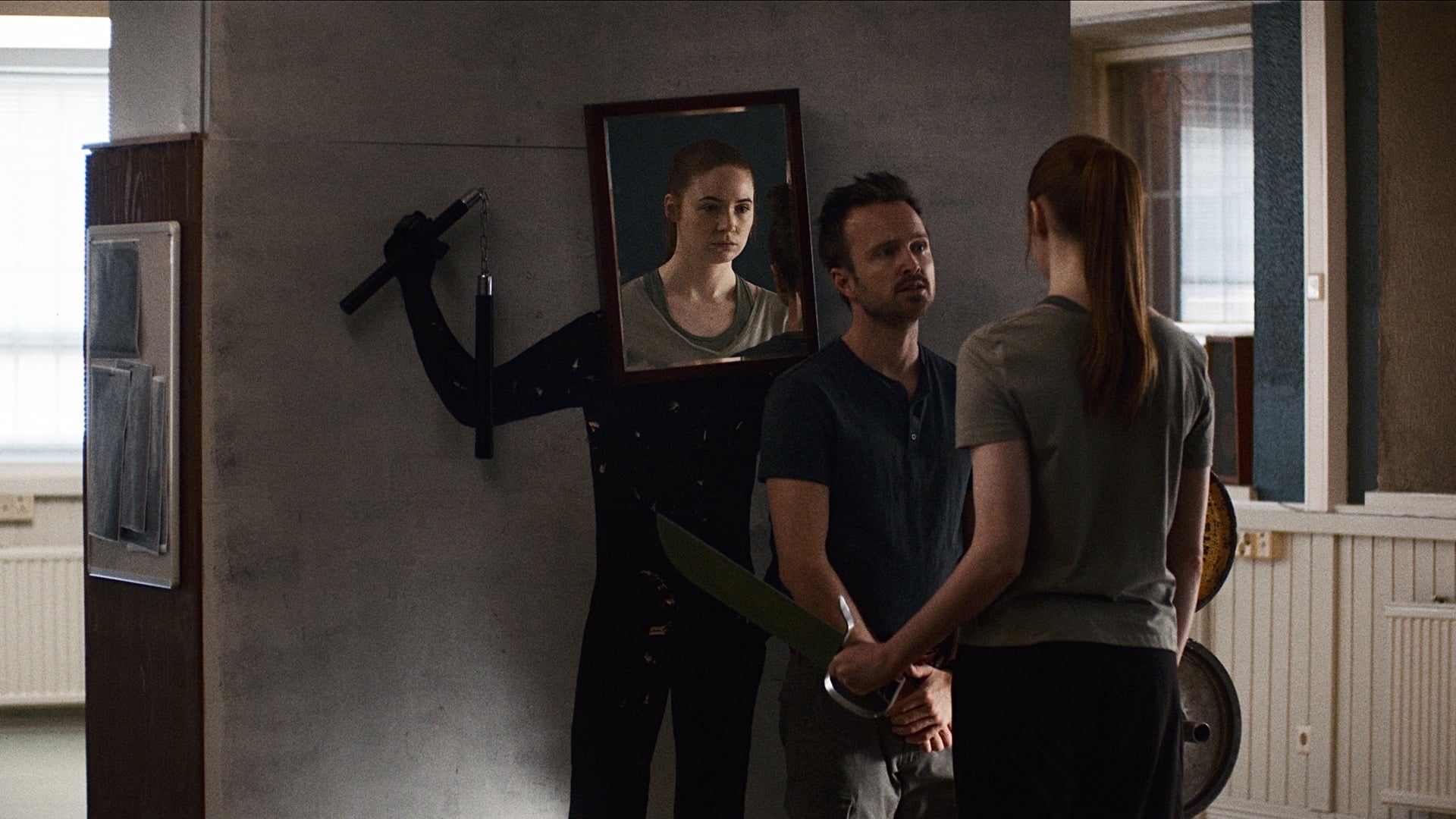 The ending of the film nullifies the time we spend with the characters during the movie – the majority of the movie was her training, so it sets the expectations for a dual at the end of the movie. The training is also on top of the movie being titled “Dual” and with a dual that opens the movie. By not bringing the two Sarahs to a dual at the end, the movie robs the audience of the payoff they made to expect from the get-go.

Ultimately, Dual fails in the end because the movie is all setup and no payoff.

The ending itself was a bit too open-ended for its own good. Yes, there are hints throughout the last 15 minutes or so of which Sarah survives at the end – her bad driving, the “S” and “SD” labeling on the bottles and the mom discussing brown contacts – but it unnecessarily leaves it up to the audeince to figure out between two endings:

I am all of vague open-ended finales for movies, I think it is great that movies can end this way and leave the audience to discuss and think about the movie after the credits finish. But, for this type of ending to be successful, it has to make sense. The ending for Dual did not.