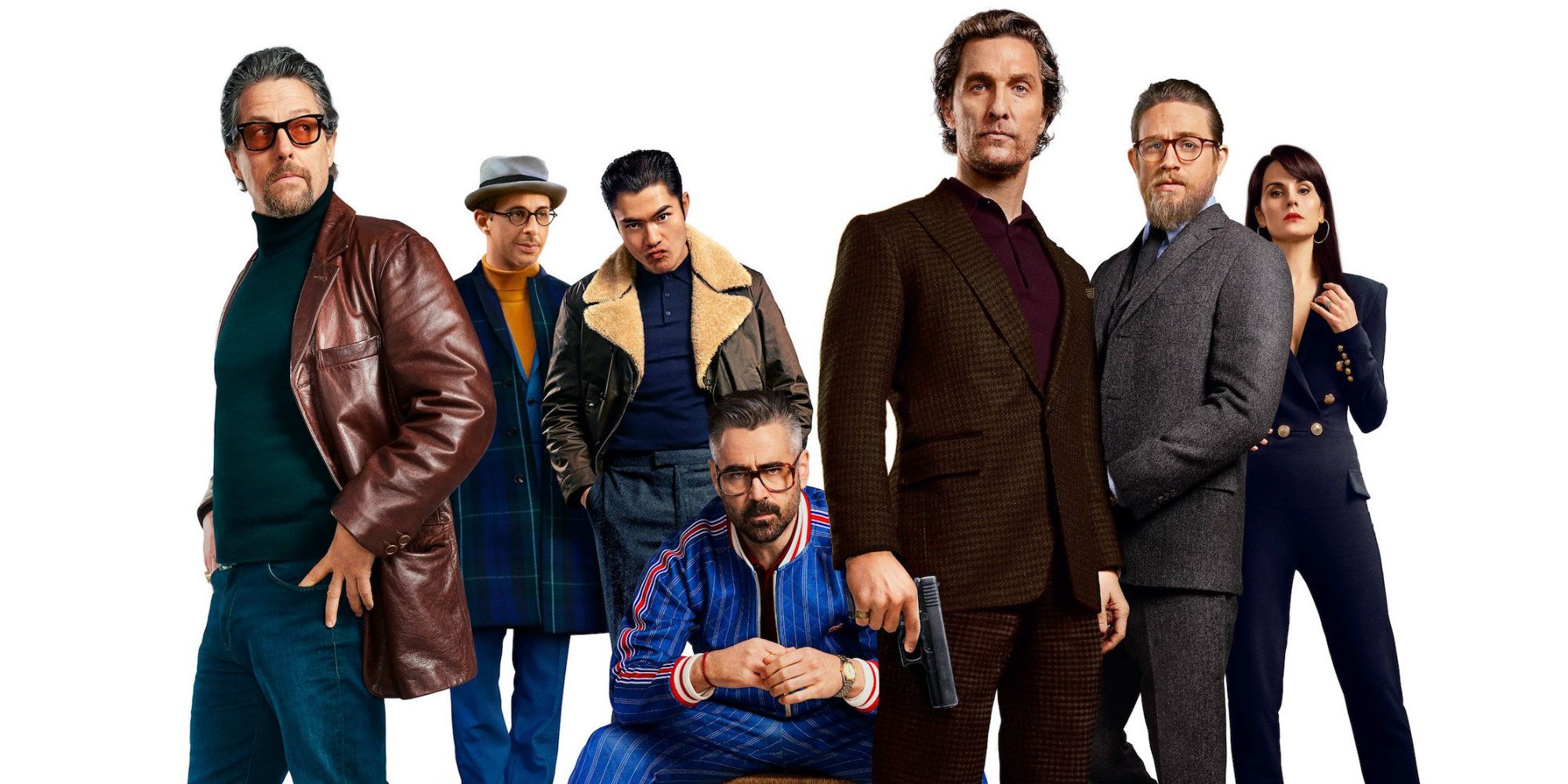 The Gentlemen is a film that will tickle the fancy of any Guy Ritchie fan. For the rest of us, it will be a divisive film. The film is vulgar (I lost count of the number of times the characters used the word “cunt”), violent and at times completely unpleasant (pig, large pig) – yet, I was, for the most part, entertained by the film – mainly for the performances in the film, rather than the needlessly convoluted plot that ends up looking like an ouroboros.

Mickey Pearson (Matthew McConaughey) is an American who has become a crime boss in the UK with his intricate marijuana production and distribution network. He is tired of the game and is looking to sell his business and retire to a boring life with his wife Rosalind (Michelle Dockery). The movie is told through an unreliable narrator: An investigative reporter for a tabloid, Fletcher (Hugh Grant) who has ambitions to write a script for a major motion picture. Fletcher approaches Pearson’s righthand man Ray (Charlie Hunnam) with the whole story, trying to blackmail Pearson out of some money to keep the story hush-hush. The story includes other colorful characters – who are nowhere near being gentlemen – like a rabid Asian gangster named Dry Eye (Henry Golding), a businessman Matthew (Jeremy Strong) and Coach (Colin Farrell).

The story itself is amusing for the most part, but it gets rather full of itself and becomes muddled – losing its edge when compared to the sharp dialogue. Only in Ritchie films do people talk like they do in this movie, which is fine because the dialogue is nearly Tarantino-levels of goodness. I almost want to say that if you have seen one Ritchie film, you’ve seen them all. But, that would be unfair. He has a style when making his own films and that is a good thing.

What really makes the film enjoyable are the performances of the cast. McConaughey is McConaughey and that is great! Hunnam is solid in his role as the consummate professional who is having issues with gravity (“It was the gravity that killed him” / “You need to invest in some parachutes.”). It was great seeing Henry Golding play against his type (aka romantic lead like in Crazy Rich Asians and Last Christmas), though he may have hammed it up a little too much.

The real performers to watch are Hugh Grant and Colin Farrell – both exude an unbridled enthusiasm for the roles and both have some spot on comic timing. Grant is particularly hilarious as the squirrelly reporter telling a story that is probably only half true. Farrell is great in his role, though I wish he was given even more than he had.

I appreciate the choice of music throughout the film. It worked very well.

In the end, while the plot maybe muddled, the performances throughout the film make this one worth watching.

There is a side plot that is setup early in the film with the son of a Russian oligarch that was completely superfluous. Yes, it is used as a twist at the end of the film, but the twist was not earned. Also, maybe because it is Fletcher telling the story (and he needs a sequel as he tells the Miramax executive), the Russian oligarch plot wasn’t wrapped up at all. Sure, the dancing boys and Coach kill off the group of hitmen sent to kill Mickey and Ray, but I’m sure the oligarch would not be happy that they are still alive. The Gentlemen 2, anyone?

The same can be said about the side plot of the daughter that is returned home. Other than to have it show the destructive powers of the white and brown powders that George sells, there really was not much to that storyline.