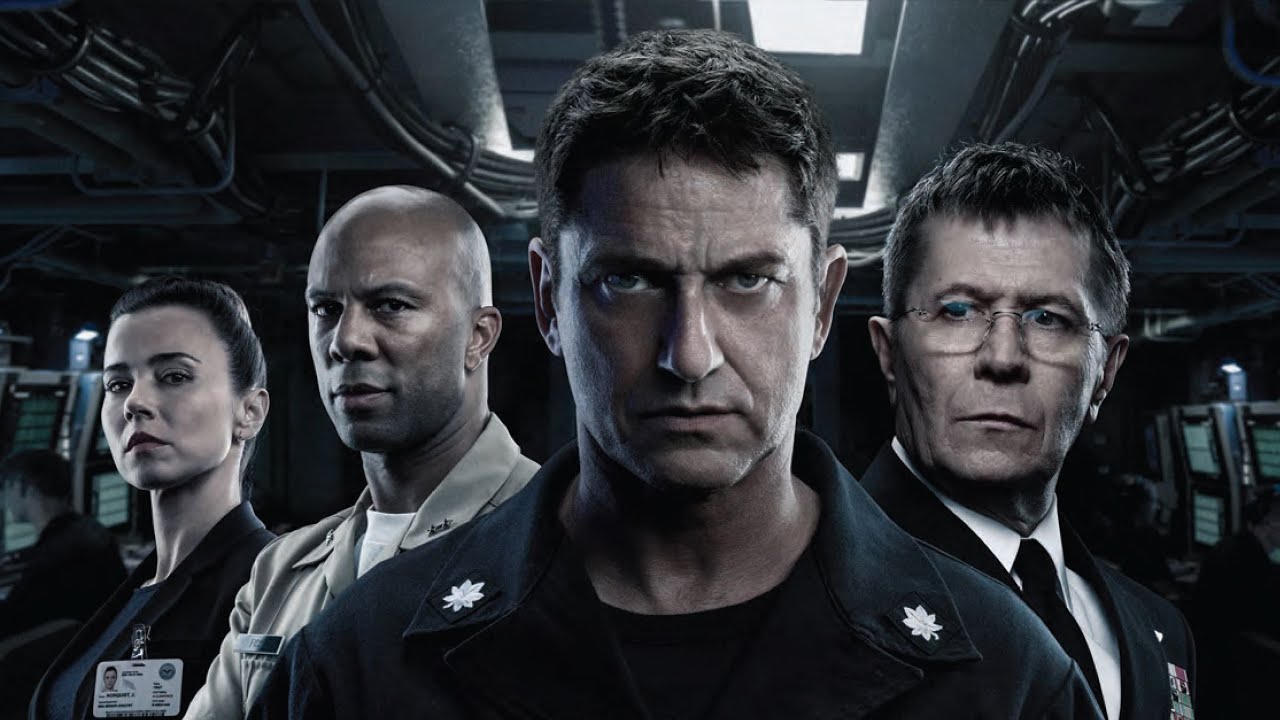 I had braced myself for a bad movie based on reviews of Hunter Killer. What I got was an entertaining submarine movie on steroids – a sort of Tom Clancy Lite film. I was very entertained for the two-hour running time of the film. This is the kind of movie that one finds by accident while scrolling through their Netflix feed and thinking, “This might be entertaining” and proven right after watching it.

Two subs are sunk as the movie opens, an American and a Russian submarine. Forced to start an investigation quickly, the USS Arkansas is activated since it is the closest sub to where the incident occured. The Arkansas just lost its commander, so a new captain is put into command: Joe Glass (Gerard Butler). Glass is a fly-by-the-seat-of-his-pants, cowboy kind of captain that rose up through the ranks while working onboard other submarines. Onboard the Arkansas is a by-the-book (and a bit of a cowardly lion) XO (Carter McIntyre).

An coup is being attempted at the Russian shipyard in Polyarny by an evil Minister of Defense named Durov (Michael Gor). He is holding the Russian President Zakarin (Alexander Diachenko) hostage so that he can start a war with America. All the while a group of Navy SEALs, led by Lt. Beaman (Toby Stephens), is dropped behind enemy lines to get a closer look at what is going on at Polyarny. And to add on top of all of that, there is what’s happening at the Pentagon which follows Admiral Donnegan (Gary Oldman), Rear Admiral Fisk (Common) and NSA analyst Norquist (Linda Cardellini). Oh, and there’s a Russian sub commander named Andropov (Michael Nyqvist).

Yes, the script tries to do a lot and for the most part, it all works out. I think there might have been too much cutting between situations in the film. I would have loved for the film to put more focus on the subplot that follows the Navy SEAL team because that subplot is more thrilling than any of the other subplots – even more so than the main plot on the USS Arkansas. The assault on Polyarny was quite good, along with an escape sequence that was thrilling. Plus, with the Navy SEAL story we finally find out where John Robinson was prior to getting Lost in Space.

Gerald Butler, Michael Nyqvist and Gary Oldman all ham it up for the big screen. But, that is OK, it made the film that much more watchable. Gary Oldman was in full-screaming mode which was both fantastically watchable and cringy at the same time. Stephens is fun to watch on screen and gets some of the best lines in the movie.

The special and visual effects of the film are a hit or miss – leaning a bit toward miss. But, they work and are effective.

I enjoyed the film. This is not the most sophisticated film, but it is really entertaining.

Worth mentioning is that the 4K UHD Blu-ray transfer of this film is reference quality. The sound is fantastic and the image is tack-sharp and super crisp.

I have seen this film multiple times, I originally watched it at Oakridge Century 20 using Cinemark MoviePass. Subsequent viewings were on 4K UHD Blu-ray.