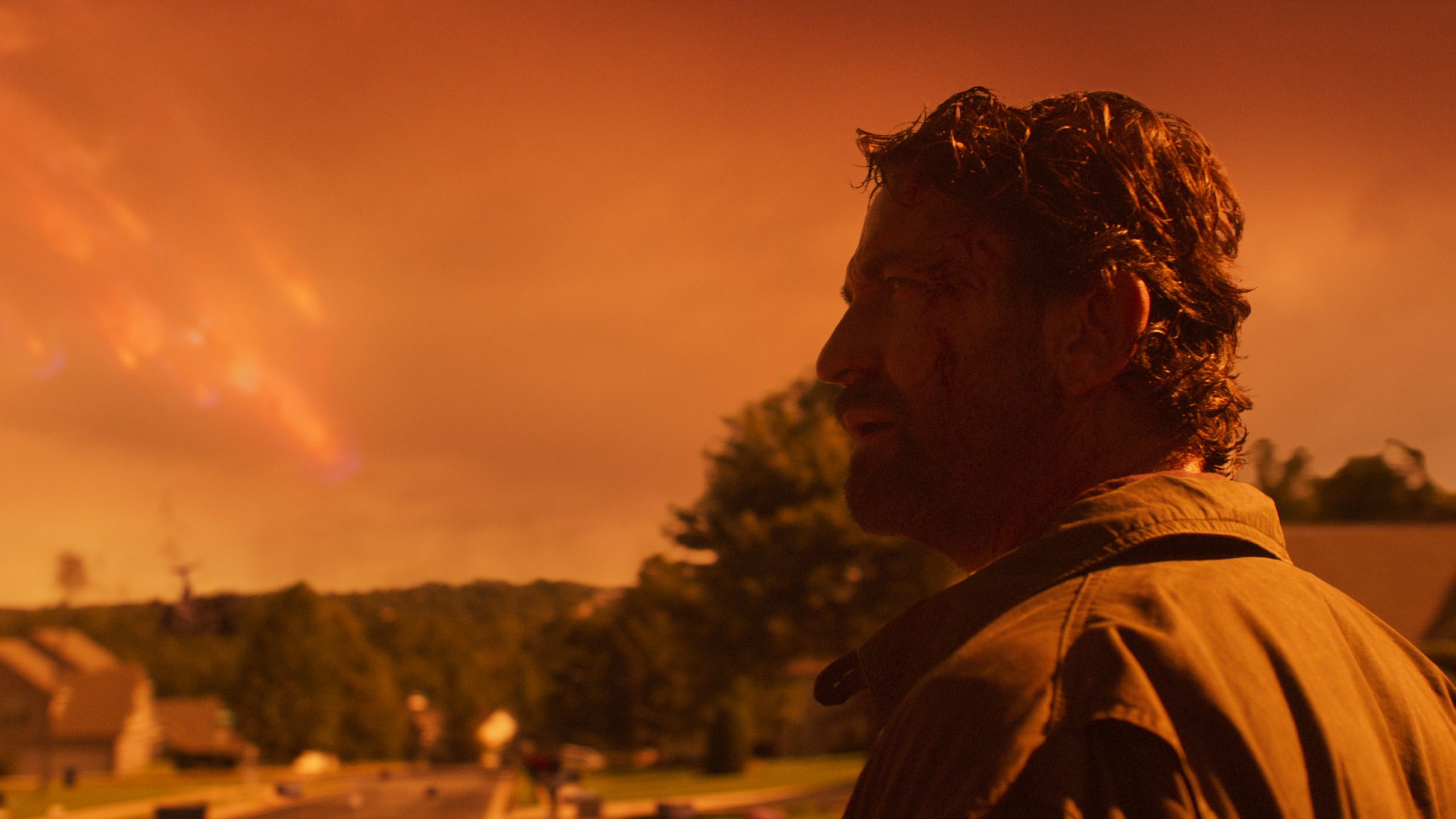 Greenland is a familiar movie. It treads the familiar path setup by a pair of 1998 movies which made mainstream the terror of “space objects on a path to wipe out life on Earth” – Armageddon (asteroid) and Deep Impact (comet). There’s even 2011’s slow moving, self-serious film Melancholia which upped the ante by sending a giant rogue planet to strike Earth. Melancholia had one of the most visually stunning renderings of what would happen in a collision also.

John Garrity (Gerard Butler) is a man with a past and struggling to revive his marriage to Allison (Morena Baccarin). They share a son, Nathan (Roger Dale Floyd) who has Type 1 Diabetes – because in disaster films, someone always has to have a chronic disease to increase the drama by decreasing the odds of survival. A comet – and not an asteroid, the film is very clear that Clarke is a comet – that is heading towards Earth starts to break into pieces. Scientists are confident that niether Clarke nor its pieces will not impact Earth. Which we know is not true because in movies, the scientists are always wrong. The movie finds the Garrity family struggling to find their way to secret government bunkers that will ensure the survival of skilled humans necessary to rebuild society.

Greenland is not a bad film, I do like what writer Chris Sparling has done with the script. The script and direction from Ric Roman Waugh do a fantastic job of building tension and creating a feeling of dread through the first half of the film. The choice to keep the film squarely focused on the Garrity family was a wise choice. Greenland feels like an optimized version of the film Deep Impact and covers a lot of the same ground, but Greenland does much better than Deep Impact because of its focus on the familiy instead of branching out into a litany of characters. The later half of the film gets a little bogged down and the last reel of the film leaves the orbit of reality.

I did like that the film explores how humanity would react to news of an impeding extinction level event. It not only shows the depravity of humanity, but also highlights the good that humanity has in itself. I really liked the scene at the field hospital with the nurse. Also, there is a scene in which Allison pleads for help from a Major (Merrin Dungey) and uses the argument “What would you do if it was your family?” and the response and reaction in the scene was extremely powerful. Dungey is brilliant in this scene (also worth noting, Dungey also was in Deep Impact).

It was nice to see Butler play an everyday man in this film after seeing him recently in all sorts of super-human roles (Angel Has Fallen, Hunter Killer, Den of Thieves). I liked the scene in which he has to deal with the fact that he killed a man, something his character from the Fallen movies has done countless times. Baccarin is fine in her role. Floyd is the typical Hollywood kid. Hope Davis has a small role in the film and makes an impact with the little screen time she is given.

The special effects in the film were decent and I was generally impressed by them – given that this is not a $100,000,000 plus Marvel budget movie.

Greenland is a fairly entertaining movie that treads a familiar path. It is not the best and could be a little better had they shaved a few minutes off the running time. But, I was entertained and Greenland was a good two hour distraction.

The build up throughout the film to the large chunk of Clarke hitting Earth was prominent. I was a bit disappointed that, when it did happen, it mostly happened off screen – there was a quick satellite shot of a cloud of smoke generated by the impact and also the shock wave rippling across the Atlantic, but nothing more. I understand that the budget was the limit here and did not allow for much to be shown onscreen, but I was disappointed nevertheless. I did like the shot of the Earth post-Clarke encounter.