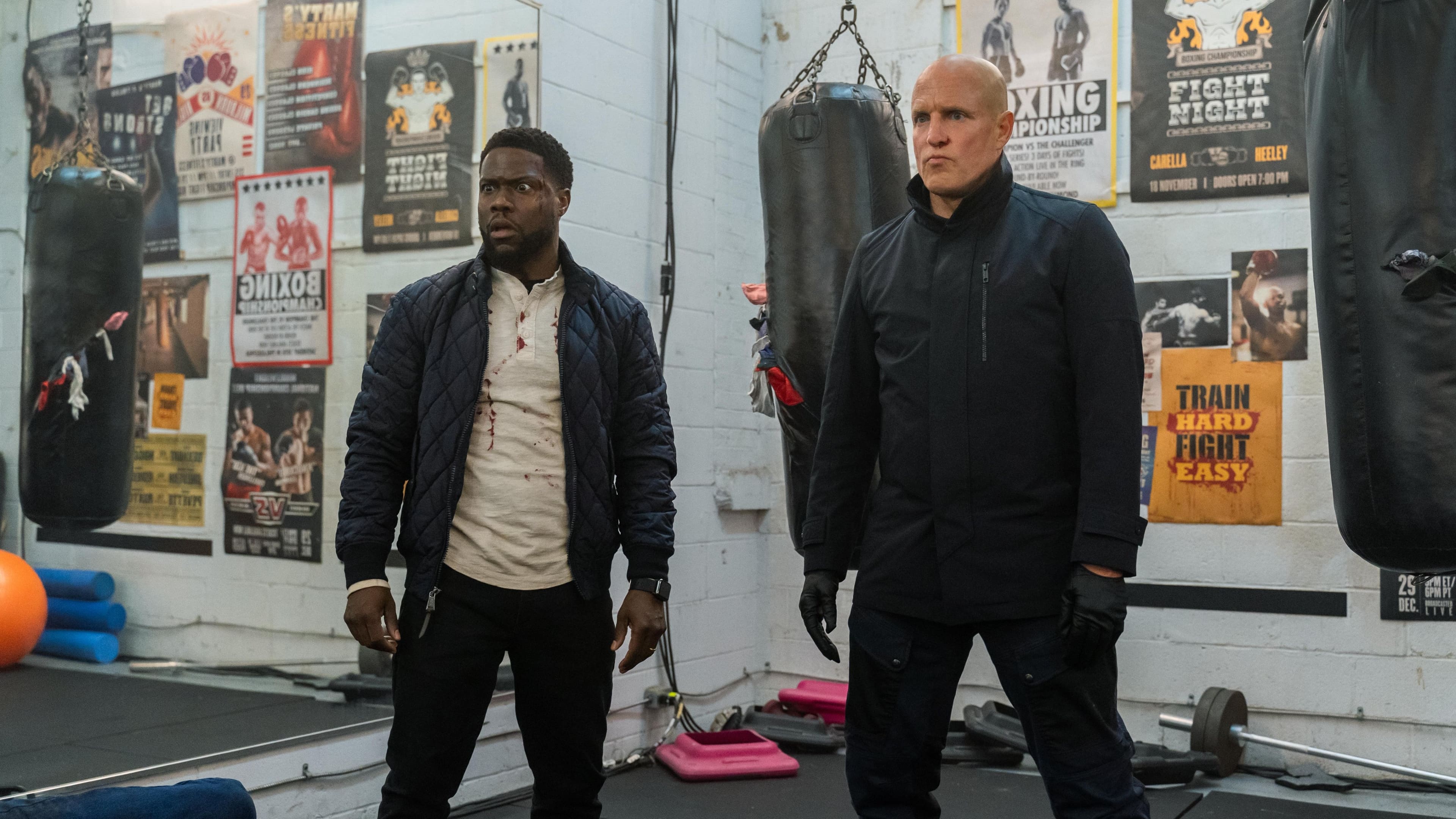 I am a fan of The Hitman’s Bodyguard and to a lesser degree The Hitman’s Wife’s Bodyguard. Though neither of those are the best in the buddy action comedy genre, the cast make them much better than they could have been – Ryan Reynolds, Samuel L. Jackson and most especially Salma Hayek are great in those films.

So, I had some expectations coming into watching The Man from Toronto which is directed by Patrick Hughes, who also directed the Hitman’s Bodyguard films – but I had to temper those expectations a bit because this is a Netflix movie and from my experience, Netflix movies lean farther into being mediocre than being excellent.

Teddy (Kevin Hart) is a guy who is trying to promote terrible fitness ideas online – he’s so bad at his job that his wife’s (Jasmine Mathews) coworkers have now turned his name into a verb equating to “failing”. When Teddy takes his wife on a romantic trip, he arrives at the wrong place at the wrong time because he forgot to change the toner in his printer. He is mistaken as The Man from Toronto, an assassin with a reputation for gruesome interrogations. The FBI asks Teddy to continue to be The Man from Toronto in order to save the day, but the real Man from Toronto (Woody Harrelson) has other ideas for how to employ Teddy.

The director, Patrick Hughes makes “just good enough” comedy action movies and The Man from Toronto falls well below the threshold of being “just good enough”. The pacing of the movie is off and the movie feels a lot longer than the less-than-two-hour running time. Hughes is able to get decent performances out of Hart and Harrelson, who share some decently funny chemistry together onscreen. But, the action sequences in the movie lack energy and impact making the movie feel even more laborious to watch. And while categorized as a thriller, there are nary any thrills in this movie.

The screenplay by Robbie Fox and Chris Bremner based on a story by Jason Blumenthal is contrived to the point of breaking my suspension of belief. The situations that Teddy and The Man from Toronto get into make no sense at points.

I find Kevin Hart funny, he is unique in the way that he acts and I appreciate it. The scene that is in the trailer with him acting as The Man from Toronto with knives trying to interrogate four men was genuinely hilarious and memorable. Unfortunately, in this movie he merely playing the same character that he played in Central Intelligence without being paired up with the charismatic Dwayne Johnson.

And that is the crux of this movie. Both Hitman’s Bodyguard films had a strong cast, Central Intelligence had Dwayne Johnson. And as much as I like Woody Harrelson, he was not very good in The Man from Toronto, leaving Hart pulling the weight for the movie. Apparently, Jason Statham was originally signed on to play The Man from Toronto, but pulled out because of disagreements about the tone and rating of the movie.

Did they Teddy this movie? Yes for the most part this movie was Teddied. I can see why Sony shuffled The Man from Toronto over to Netflix instead of giving it a theatrical release as this is more of a direct-to-streaming grade movie than a theatrical movie. While somewhat entertaining, this movie was generic and dragged along for most of its running time. The Man from Toronto perfectly fits the Netflix template of content: Generic, mediocre, underwhelming and barely entertaining.