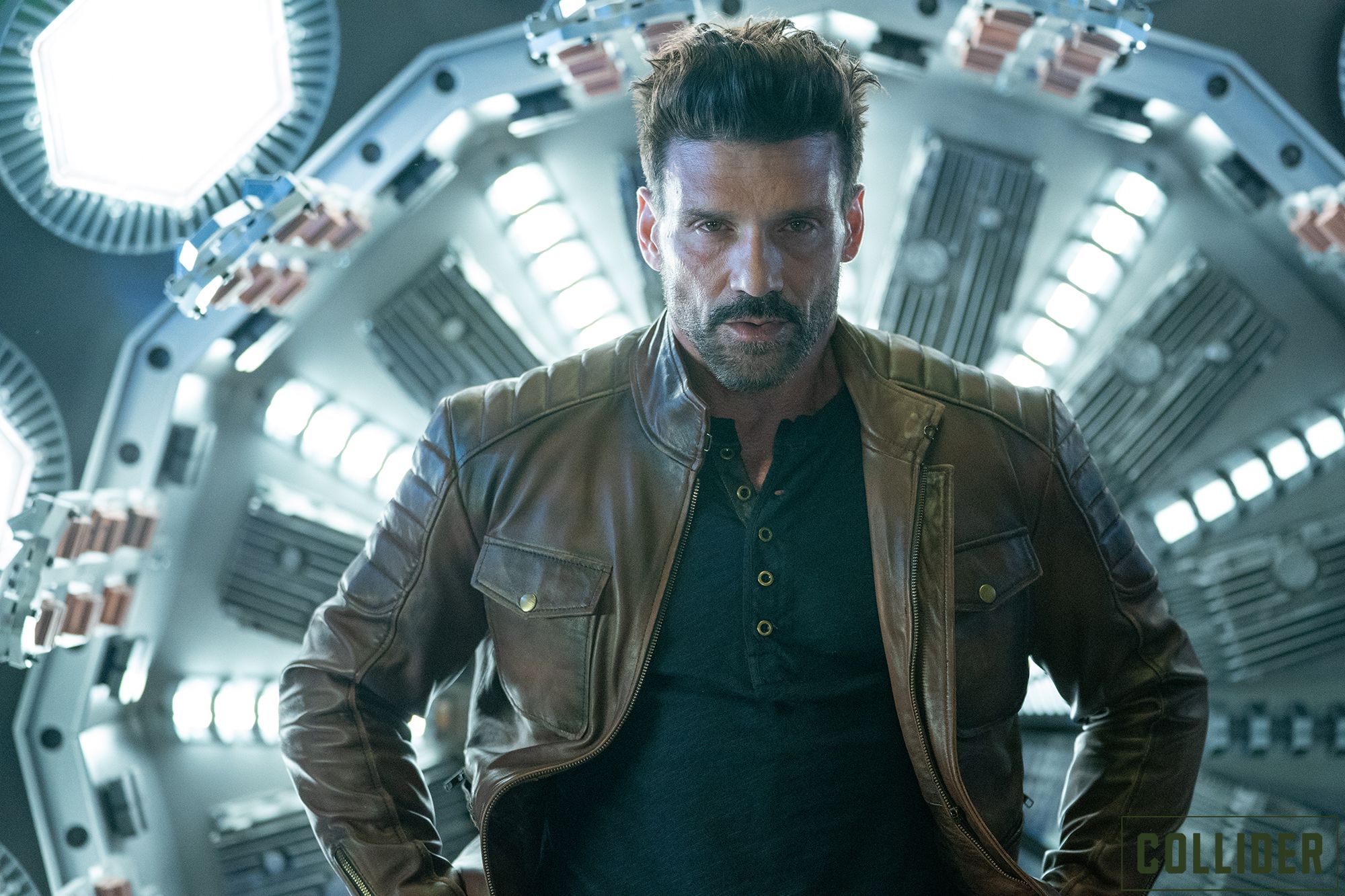 Remember action movies from the 80s and 90s where it was pure unadulterated action without all the frills of character development? That’s what Boss Level is and this is ultimately a very good thing.

Roy Pulver (Frank Grillo) wakes up over and over to a screaming woman (Annabelle Wallis) and a man with a machete wanting to take off Frank’s head. Then there’s that pesky armed helicopter (a seeming staple of Carnahan films), the pair of women ready to blow him up, a short guy with explosives, the twins (one being Quinton ‘Rampage’ Jackson who starred as B.A. Baracas in Carnahan’s The A-Team), Frank’s twin and also the girl with the sword (Selina Lo). Pulver is not having a good day and it never stops repeating. Eventually, there’s a boss bad guy, Colonel Clive Ventor (Mel Gibson) and his henchman (Will Sasso) too.

Boss Level is a riff on the now overused time loop mechanic where the day repeats over and over again until the protagonist finds a way to end the loop. Boss Level borrows bits from other time loop films like the original Groundhog Day, Edge of Tomorrow, Source Code, Palm Springs and The Map of Tiny Perfect Things. I had no expectations that Boss Level to have any depth when it came to the time loop and it doesn’t. The time loop is only used to let us see Pulver learn (as if he were in a videogames) how to beat the boss. It also allows for the movie to squeeze in some action sequences and some laughs. And in the way that the time loop was used in Boss Level, it was used well.

Frank Grillo is an underrated actor and he is great in Boss Level. Grillo effortlessly exudes charm, confidence and a wry humor. He is perfect for the role of Pulver. Naomi Watts is good during her limited screen time. Gibson is reduced to being a ranting and menacing desk-bound villain – and his limited screen time is definitely a good thing. Frank Grillo’s son Rio does well in his role as Pulver’s son. The ever awesome Michelle Yeoh makes a cameo in the film and she’s fantastic. Ken Jeong’s cameo is him being Ken Jeong, which is not a bad thing.

The heavy use of voice-overs by Pulver was a lazy way for the screenwriters (Carnahan being one of them) to get exposition out of the way. There was way too much voice-over in Boss Level and a lot of it was unnecessary and this slows down the movie and hampers the manic pacing of Carnahan’s direction.

Joe Carnahan is an underrated and talented director. His style of direction reminds me a lot of John Woo’s style – Carnahan’s action scenes have that same sense of kinetic energy as Woo’s and not many directors can achieve this level of intensity with action. Carnahan’s action sequences also have a clarity to them, again just like Woo’s where the action is easy to follow, yet frantic and aggressive. I have been a fan of Joe Carnahan since Ticker, which was a short film in the BMW series The Hire. His feature films have all had the same sort of kinetic action and sly humor: The A-Team, Smokin’ Aces and Stretch. The one film of his that I have not watched yet is The Grey and I need to. I believe Carnahan makes a cameo in Boss Level as one of the patrons at the diner.

At 100 minutes long, Boss Level is the perfect length for a fun, action packed film. I came into Boss Level knowing that if it had anything, it would have great action and for that I am satisfied. Boss Level is a wildly entertaining and pure action film.