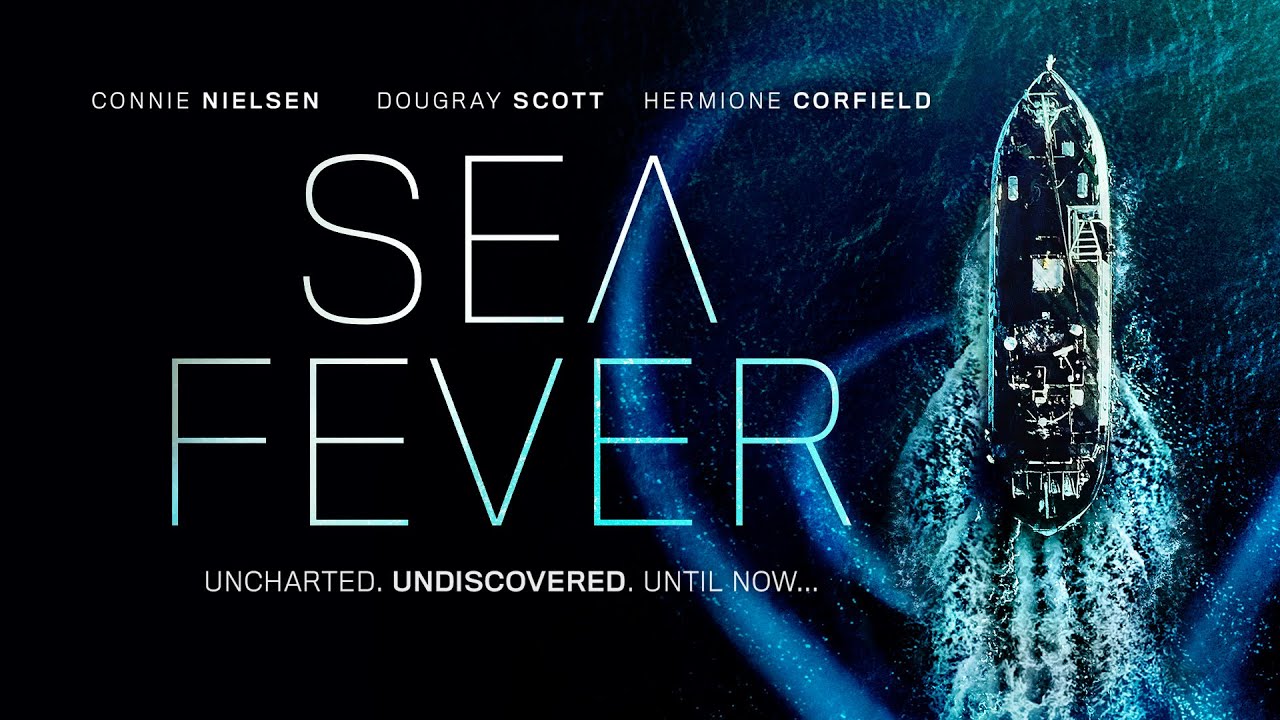 I am always delighted when I see a film that comes out of nowhere and stretches beyond genres to become its own special niche. Sea Fever perfectly blends sci-fi, horror, monster flick and is an allegory about our current pandemic.

Sea Fever follows Siobhán (Hermione Corfield) an introverted marine biologist who would rather work alone than join a party. She is encouraged sternly by her professor to go out to sea to further her studies and she joins the crew of a ragged fishing trawler led by a couple (Dougray Scott and Connie Nielsen). When the trawler is caught by an anomalous creature out at sea, things begin to fall apart for the crew.

Sea Fever never goes for the cheap scares, it burns slowly and builds dread consistently throughout the film. It builds this dread through the unknown and it does it efficiently and very well. Writer/director Neasa Hardiman does a great job with the film. The characters that she created and the situation that they are dropped into are all grounded and never once feel outlandish. The film is engrossing from start to finish.

The exploration of ethics of infection in the film was not aggressive, it was well-written into the dialogue and subtle. The film takes Spock’s dialogue from The Wrath of Khan and expands on it, “Logic clearly dictates that the needs of the many outweigh the needs of the few.” More on this in the Spoilers section.

It was nice to see Hermione Corfield again. I had to look her up because she seemed so familiar because she made a lasting impression in Mission: Impossible - Rogue Nation as Record Shop Girl. Her performance in this film is fantastic. Worth noting is Dougray Scott who is perfect in this film as the cowardly co-captain of the ship that is hiding behind his leadership position. Connie Nielsen is fine, but her accent is bizarre and very distracting. Ardalan Esmaili who plays Omid is also noteworthy for his performance as an engineer who could be doing more with his skills.

I like Sea Fever a lot as a film, though as the film wrapped up, there was a lingering thought that this film has so much more potential than what it is. That being said though, it is a film worth watching.

Watched at home streamed on Hulu.

As the movie opens, the captain of the ship gets a call from the Coast Guard letting them know there is an exclusion zone and they should stay clear of that area. Of course, the boat heads that way because there is a large cache of fish there. The Coast Guard must have known about the creature(s) there, so why wasn’t there a clearer warning (ie. biohazard)? Why leave the area unguarded? I understand that the Coast Guard may not have understood the extent of the problem, but they obvious knew there was a problem and did nothing to keep people away outside of radio warnings.

Exploring the needs of the many over the needs of the few was a big part of this film. As the trawler heads back to port, the captain and her husband are dead set on getting back on land. Siobhán on the other hand believes that they should stay out at sea and quarantine themselves. With one crew member dead and one dying, the captain argues that they would do much better getting back to land and going to a hospital. Siobhán disagrees and believes that the quarantine will make sure that they do not infect the general population as it seems the infection happens quite rapidly. This later half of the film is intriguing in how it tackles this dilemma and does not cut corners in getting to an ending that makes sense.

The creature itself is a wonder and I am a proponent of “less is more” when it comes to scary creatures. But, I think with the creature from this film could do with more information. The contagious nature of the creature is explained as a defense mechanism. With the slow death rate (around 36 hours) and quick rate of infection, this defense mechanism both is ineffective and too effective. Ineffective because it is too slow to defend against fast acting threats – if it takes 36 hours for it to kill off an attacker, that maybe too long. It’s a bit too effective because it spreads so quickly between organisms. Though, that is ineffective because the infection is unbiased – making it quite dangerous as it would wipe out all food sources around the creature.

The creature also seemed to live in shallow waters – the tentacles were able to reach the boat from the sea floor and in the end Siobhán was able to almost swim to the creature’s “mouth”. The creature glows, which I assume is a way to attrack prey since it doesn’t look like the creature is mobile. Given these two things, how is it that the creature hasn’t ever been seen by fishermen before?

I was a bit perplex by the old woman and why she turned into a crazy horror film-like witch. The explanation that she was infected made sense afterwards, but it was a bit jarring at first. It was a subtle way of letting the audience know that the eye test is probably not an effective way of determining if someone is infected.

The film leaves one thing open-ended and that is the fate of the captain (Nielsen) who leaves in a row boat with an “at least three days” row back to shore. She had tested out fine with the eye test, but testing was shown as questionable. Did she get to the boat that was seen at the end of the movie and bring it back to rescue Siobhán and Omid? Is she and Omid infected and contagious? The open ended ending is a disturbing ending.

There was a bit of dialogue that I really liked in the film: