I am a fan of Star Trek, though my fandom is based mainly on the movies and not the TV shows. I have watched episodes of the TV show (not all of them), but I am not one to point out what happened in which episode that was reference in a movie. But, I do love the movies, my favorite being Star Trek II: The Wrath of Khan, followed by Star Trek IV: The Voyage Home and then in third? This film. (If you’re curious, in fourth place is Star Trek VI: The Undiscovered Country). 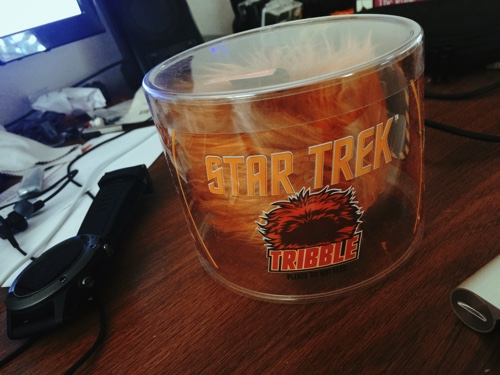 I do have a Tribble on my desk.

There are spoilers throughout, so beware if you haven’t seen this film already.

This reboot of the Star Trek series remakes the franchise as an action sci-fi franchise instead of a slower thinking man’s movie series. I am completely fine with that as long as the film is fun and the characters are engaging. Star Trek fits both those requirements. The film is fun and is packed with action. It also has a sly sense of humor about it – sometimes it is at the expense of James Kirk; sometimes it’s a recurring phrase like “cupcake”; and a lot of times it is from Scotty and his pal Keenser.

Star Trek opens with a mysterious spacecraft appearing out of what looks to be a blackhole. The ship along with a “lightning storm” in space is met by a Starfleet USS Kelvin which has as its first officer Thor! I mean, George Kirk, the future daddy of James Tiberius Kirk. The Romunlan ship, Narada, is headed by Nero (Eric Bana) and he is here to seek revenge against Spock.

We get a short section of film after the attack that gives us the origin stories of the new James Kirk and Spock – from their troubled childhoods to their decisions to join Star Fleet to them graduating from Star Fleet. The movie moves at a quick pace and before we know it, we are on the USS Enterprise ready to ship off to Vulcan to investigate a mysterious signal.

The film gives its new cast time to bond and it all works out. For most of the casting, on my first viewing of the film in 2009, I was ecstatic. Chris Pine is the perfect new Kirk. He has a confident swagger, a pretty face and when needed is able to convey a sense of leadership. Karl Urban is great as the ever-grumpy Doctor Leonard McCoy. Zoe Saldana makes for a perfect tough as nails Uhura. John Cho is good as the “fencing” Hikaru Sulu (though, Cho is Korean and Sulu is Japanese, but I can let that slide). Simon Pegg took a little to get a hang of as Scotty, but he really does fit in. Anton Yelchin is perfect as the young Chekov, complete with the accent. The casting for the new crew that I originally did not agree with was Zackary Quinto as Spock. Quinto a the time was still working on the TV show Heroes and I could not put him in the role of Spock. At the time, he was Sylar with pointy ears pretending to be Spock. Now that some years have past and I am watching the film again, he makes a great Spock and I am glad he was cast in that role.

Poor Eric Bana is left with not much to do in the film except try to be menacing underneath all his makeup. His character, Nero, the antagonist in this film, is very bland and is not given much to do. Even the backstory that he is given to justify his genocide of the Vulcans does not resonate as it was almost past to the audience as a bit of exposition.

Poor James Kirk gets his ass handed to him a lot during this film. Captain Kirk seems to be the punching bag for just about all characters in the film from cadets to Nero himself. One just has to feel sorry for Kirk by the end of the film.

The real star of the film is Bruce Greenwood as Captain Christopher Pike who recruits James Kirk into Star Fleet and is the first captain of the USS Enterprise (just ask it was with the original TV show). Greenwood brings a gravatas to his role and I really enjoyed him in this film (and Star Trek Into Darkness). Hell, it would be great if they could make a Star Trek film just starring him as Captain Pike, that’s how good he is.

What I liked was that the movie makers respected the old storyline, even though they were completely wiping it out and rebooting the series. Instead of a straight reboot where things start from zero without any acknowledgement of the previous films, Star Trek at least adds some continuity between all the films. That linking piece is the fantastic Leonard Nimoy who shows up in the film as Spock Prime (the actual Spock that Nero was looking for). Having Nimoy in the film made the Star Trek fan in me happy.

This isn’t to say that there aren’t issues with this film. There are some that are easy to overlook like J.J. Abrams’s much criticized overuse lens flare; the icky icky relationship between Spock and Uhura (ugh); or the constant need for people to be running in starships. But, there are some that are glaring.

A lot of the outcome of the film depended on coincidence. Kirk had to meet McCoy on the shuttle on the first day. McCoy had to take pity on Kirk to bring him stealthily onboard the Enterprise. Kirk had to been ejected from the Enterprise in his capsule right next to the planet where Spock Prime was and to land within walking distance from Spock Prime’s cave. The cave just happened to be walking distance from a Star Fleet base where there just happened to be Scotty there working. The coincidences really took away from the story quite a bit.

So, in the end, Star Trek is my third favorite film of this franchise. It is one that I can watch over and over again because it has so much action and it is fun to hang out with the characters. I watched this time on 4k Blu-ray and it was a feast for the eyes and ears.